Where Does Volcanic Activity Occur?

Myth: Most of the Earth's igneous rocks are produced at the "Ring of Fire."

Fact: 70% of the Earth's surface is ocean floor, which is made of basalt, an igneous rock produced at mid-ocean ridges. The ridges are the most volcanically active features on the planet.

Volcanic activity occurs at two types of plate boundaries: mid-ocean ridges and subduction zones. At mid-ocean ridges, basaltic eruptions produce new sea-floor crust. These underwater eruptions don't produce big mountainous volcanoes, which is why they are often overlooked as the most volcanically active features on Earth. Commonly, basalt is erupted at mid-ocean ridges as blob-shaped "pillows." These pillows form when basalt is suddenly quenched as it comes into contact with sea water. If you cut a pillow in half, you'll find a glassy rind around the outside, where the lava cooled so fast that it couldn't form any crystals. Inside the pillow will be a crystalline matrix of cooled basaltic lava.

Here's a short video clip taken from the Alvin, a submersible oceanographic vehicle, as scientists tried to collect some pillow basalts underwater in the Gulf of Alaska.

At subduction zones, volcanoes are created on the overriding plate as melt from the subducting plate rises up through the mantle and crust. See the map below.

Hot spots (or not)

Hot spot volcanoes occur somewhat randomly around the globe. Their relationship (or lack of one) to the plate tectonic cycle is still being debated. The map below shows several hot spots, but not all the existing ones. In fact, there are over 100 hot spots that have been active sometime during the last 10 million years or so. Notice on the map below that out of the 25 hot spots shown, about 10 occur on top of a mid-ocean ridge. Whether this is a coincidence or not is a current topic of debate among scientists.

Mantle plumes (hot jets of material that well up from deep in the mantle at a speed of centimeters per year) were proposed as the source of hot-spot volcanoes at about the time of the plate tectonics revolution. Until recently, the prevailing wisdom held that hot spots have a deep source (perhaps as deep as the core-mantle boundary) and that they are nearly stationary with respect to the plates. Geologists, therefore, have used hot spots as an absolute reference frame from which to derive plate motions, and they have studied the geochemical signatures of the lava that has erupted at hot-spot volcanoes as a way to learn something about the composition of the lower mantle. Recent observations of some small young sea mounts east of Japan have initiated a vigorous debate about whether the standard plume model needs to be revised, or maybe even thrown out completely. This particular chain of seamounts occurs away from a plate boundary and the melt is probably coming from a source deeper than 100 km, but researchers who studied the geochemical signature of the lava concluded that the melt cannot have a very deep source, such as the lower mantle or core-mantle boundary. Their hypothesis is that a crack in the plate allowed some partial melt that was present in the upper mantle to rise to the surface and form the sea-mount volcanoes. The schematic diagram below shows their model, which they call "petit-spot" volcanism. 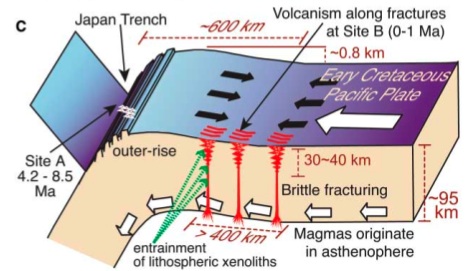 A conceptual model of petit-spot volcanism. Magmas from the asthenosphere escape to the shallow depths because of the extensional environment of the lower lithosphere and migrate up through the brittle compressed upper lithosphere by exploiting fractures created by flexure of the plate.
Hirano et al., 2006.
‹ Overview up How to Melt a Rock ›
EARTH 520: Plate Tectonics and People