How to Melt a Rock

Myth: The plates are floating on an ocean of liquid magma.

Fact: There is not a giant reservoir of molten rock just hanging out beneath the crust, waiting to spurt to the surface at any available weak spot. The mantle is solid rock. (Remember the lesson about the Earth's interior earlier in this course: If the mantle were a liquid, earthquake S waves couldn't travel through it.)

So where does that lava come from? How do rocks melt? At surface pressures, all you have to do to melt a solid is to heat it up to its melting point. It is true that the temperature rises as you go deeper and deeper into the Earth (15 - 20°C / km is the typical geothermal gradient). However, pressure is also rising as you descend into the Earth, and increased pressure inhibits melting. There are three basic ways that rocks melt to form the lavas that erupt from volcanoes: decompression, addition of volatiles, and conduction. Let's explore each of these in turn.

Decompression melting occurs at mid-ocean ridges. When two plates move apart, they create a space that can be filled by hot rock that rises buoyantly from below. As long as this hot rock rises faster than the temperature can cool off, the rock can melt because the pressure is decreasing as the rock gets closer to the surface. See pencast sketch of decompression melting at a midocean ridge!

Let's visualize what decompression melting looks like as a plot in Pressure-Temperature space!

You can construct Pressure-Temperature plots to show melting curves for all kinds of substances, not just lava at a mid-ocean ridge. For example, the plot below shows data for table salt. Note that these scientists put temperature on the y axis, and pressure on the x axis. We did it the other way around (and had pressure increasing downwards on the y axis) because we wanted pressure to be analogous to depth in the Earth in our plot. 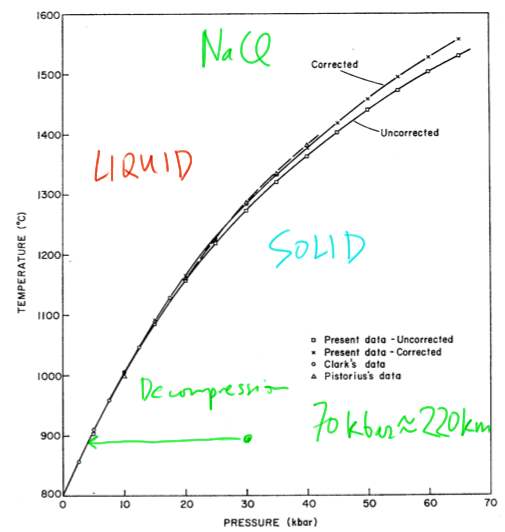 Rocks melt at a lower temperature in the presence of volatiles such as water and carbon dioxide. How do you get water underneath a volcano? The most common way to do it is to send it down a subduction zone. When a subducting plate sinks under the overriding plate, the water-saturated upper part of the lithosphere goes down, too. As the cold slab sinks, water is forced out and percolates upward into the overlaying hot, dry mantle rock. This sudden addition of water lowers the melting point of that mantle rock, and it begins to melt. See my pencast of this process. 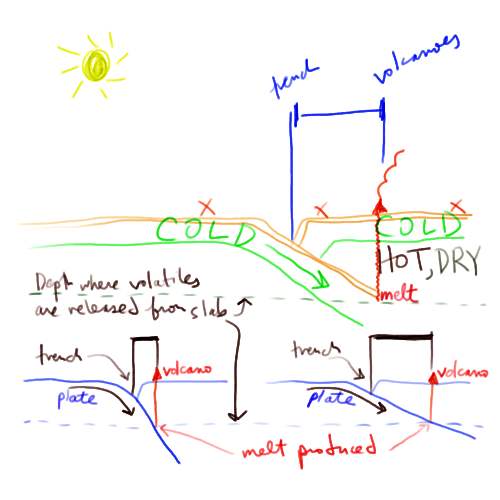 Cross-section of subduction zones showing the depth at which volatile-driven melting is initiated.

Volatile-driven melting happens at all subduction zones. The melt is generally formed at the point when the slab gets to a certain depth (the depth at which the pressure becomes high enough to force out the water). Pencast of a plot in Pressure-Temperature space for volatile-driven melting! Therefore, you can figure out the angle of subduction (i.e., how steeply the subducting plate is sinking) based on how far the subduction zone volcanoes are inboard of the trench. If the volcanoes are close to the trench, it means the slab is subducting steeply, and if the volcanoes are far away from the trench, it means that the slab is subducting at a shallow angle. 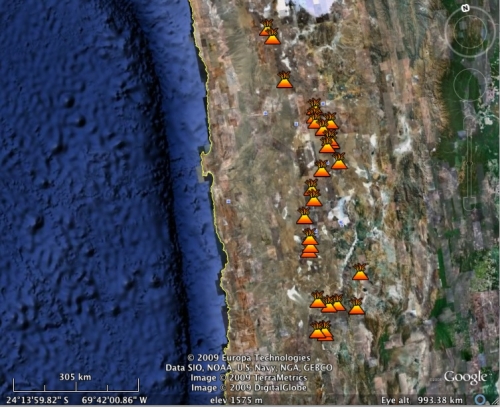 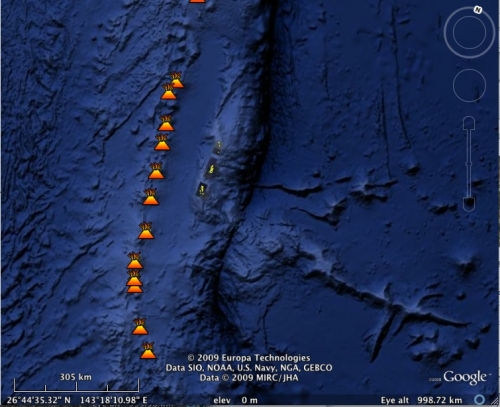 The third way to melt a rock is by conduction. Conduction is the simplest way to transfer heat. At the atomic scale, hotter particles vibrate more. When they come into contact with other nearby particles, some of that vibrational heat energy is transferred to those nearby particles, heating them up. At the macroscopic scale, when rocks melt by either decompression or by addition of volatiles, the more buoyant melt rises toward Earth's surface. When this rising melt comes into contact with solid lithospheric rock on its path upward, it can transfer enough heat to the surrounding rock to melt it. This often happens in subduction zones as the initial melt created at the slab/mantle boundary travels upward into the rock of the overriding plate.

‹ Where Does Volcanic Activity Occur? up Different Kinds of Eruptions ›
EARTH 520: Plate Tectonics and People