How Big is Big? (Volcanoes)

Myth: Stratovolcanoes (like Mt. St. Helens and Vesuvius) are huge, but shield volcanoes (like the Hawaiian islands), with their gentle slopes, are pretty much flat and not very big.

Fact: Shield volcanoes do indeed have gentle slopes, but these are the hugest volcanoes on Earth. 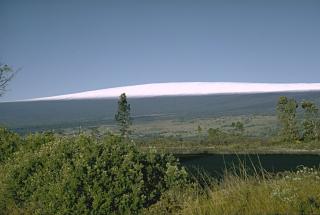 "Shield" volcanoes are so named because their shape is reminiscent of a shield lying on the ground with its convex side pointing up. Their widths are much broader than their heights and they have gentle slopes. (Side note here: Don't confuse shield volcanoes with continental shields, which are also named for their shield-like shape. The two don't have anything in common except for their morphology. Continental shields, such as the Canadian shield, and the Kaapvaal craton in South Africa, represent the oldest still-intact blocks of crust from the early history of the Earth.)

The most obvious examples of shield volcanoes are the Hawaiian Islands. See the photo of Mauna Loa shown here and note the shape of the mountain. The photo almost makes Mauna Loa look like a small, insignificant mountain, doesn't it? Actually, if you start measuring at the ocean floor, which is the real bottom of the mountain, Mauna Loa is 9 km tall, easily taller than Mt. Everest, and much wider. Only the top 4km rises above the water, though.

Shield volcanoes are formed by low-viscosity basaltic lava flows. Because basalt has such a low viscosity, it spreads out in thin sheets and can travel a long way before freezing. Gradually, after many repeated eruptions from a central fissure, a mountain will be formed—one that is much wider at its base than it is tall, but one that has the potential to be quite tall, depending on how long the magma source remains active. 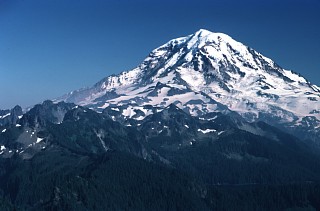 Stratovolcanoes are sometimes also called "composite" volcanoes. They most often form on the continental overriding plate in a subduction zone. The Cascade Range volcanoes are all stratovolcanoes, for example. If you asked a child to draw a volcano, the shape they are most likely to come up with is the conical, steep-sided shape of a stratovolcano. See the photo of Mt. Rainier shown here and compare it to the photo of Mauna Loa above. From the photo, Rainier looks like a bigger mountain than Mauna Loa. In fact, its actual elevation above sea level (4392 m) is higher than Mauna Loa's, but remember that the base of Mauna Loa is really about 5 km below sea level!

Stratovolcanoes are shaped the way they are because they are formed by alternating layers of lava and pyroclastic material, both of which have a higher viscosity, and thus a greater resistance to flow than the basalt-only shields. Stratovolcanoes are more likely to erupt explosively and emit ash and gas. Many subduction zone stratovolcanoes go through a life cycle spanning millions of years in which the composition of their magma changes over time. This change in the mineralogy of the magma leads to changes in the type of eruption and the morphology of volcano itself. At the beginning, mostly basaltic magma erupts. This is because basaltic magma is the original source of magma coming from the volatile-driven melting going on at the top of the subducting slab under the subduction zone. As this basaltic magma continues to be produced by more and more lithosphere going down the subduction zone, it begins to melt some of the overlaying continental crust by conduction. This new addition to the magma generally has a higher concentration of silica in it because continental crust is more enriched in silica than oceanic crust. The addition of silica lowers the melting point of the magma and also increases its viscosity. So, now the eruptions will be more explosive, involve ash and pyroclastic debris, and stratovolcanoes will form. Next, the magma chamber will be highly silicic, quite viscous, and can erupt in a huge caldera-forming event. Finally, whatever is left of the magma body slowly cools, forming little resurgent domes, hot springs, and at the end, great bodies of intrusive igneous rocks such as granites. Below is a cartoon sketch of this cycle.

Schematic cross-sections depict the caldera cycle. At time 1, basaltic magmas rise to produce small cinder cones. At time 2, andesitic and basaltic magmas form stratovolcanoes. At time 3, a large rhyolitic magma chamber forms. At time 4, a big pyroclastic eruption produces a caldera. At time 5, the floor of the caldera bulges upwards and what's left of the magma chamber begins to cool. Note the timescales for each part of the cycle.
Figure from Fisher et al., (1997).

‹ Different Kinds of Eruptions up How Big is Big? (Eruptions) and Problem Set, part 1 ›
EARTH 520: Plate Tectonics and People