The following is a problem set that will allow you to explore the various monitoring datasets that are used at Kilauea volcano. I am more interested in you being able to get a grasp of what instrumentation is deployed, what it measures, why it is important, and how the various measurements work together to give scientists a picture of the overall state of the volcano. I am less concerned with you being able to define each bump and wiggle that you might see. So think big picture when you look at the tilt, rsam, and gps data.

The goal of this problem set is for you to:

Read this paper, available in our Canvas space. This paper is a report of some sustained eruptive activity that occurred on Kilauea and its East Rift Zone during the summer of 2007. The activity was recorded by a wide variety of geological, geophysical, and geochemical monitoring instruments, the details of which are discussed in the paper. If you are unfamiliar with any or all of the types of instrumentation described, this paper may seem dense. My advice when reading is to try to focus on the space-time sequence of events, rather than the specifics of the instrumentation. In addition, you may want to go back one page in this lesson to refresh your memory of what each type of instrument measures. Perusing my follow-up questions first will help focus your reading.

Answer the following questions. Append them to the same document you started for the eruptions problem set that dealt with the VOGRIPA database.

Part 2, analyze and interpret real data from the 2018 eruption at Kilauea

The Hawaiian Volcano Observatory continuously monitors both the Kilauea summit and the Pu'u O'o vent to the east with a variety of geophysical instrumentation. Their Deformation Data page explains how to interpret deformation plots in light of what the volcano is doing.

There was an eruption that began in May 2018. I want you to use GPS, tilt and seismic data to describe it. This is part of the real fun of using real scientific data that hasn't been sanitized for "educational purposes"! Post to the Questions discussion board if you get stuck!

Below is a map of instrument locations. Use it to answer questions 1 and 2. For more detailed maps, refer to the maps on the previous page. 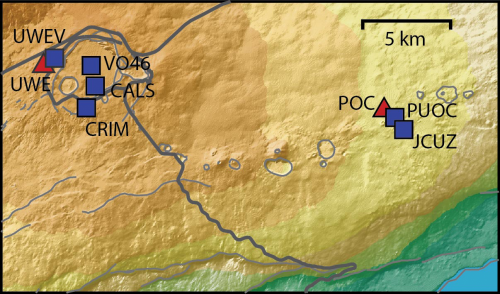 Upload the document containing both your earlier work from VOGRIPA and the work you just did with Kilauea to the eruptions problem set assignment in Canvas by the due date specified on the first page of this lesson.

I will use my general grading rubric for problem sets to grade this activity.