Richard Dixon Oldham was born in India in 1858 to a father who was a professor of Geology that studied Himalayan earthquakes. As such, Richard joined the Geological Survey of India at the age of 21 as Assistant Superintendent, with one of his first tasks being to revise and publish his father’s memoirs and surveys. Beyond publishing his father’s work, Oldham produced more than 40 publications to the Geological Survey related to the structure of the Himalayas, hot springs of India and other geologic features of India in his career. He is best known for his work on the magnitude 8.1 Assam earthquake of 1897 that was felt over 250,000 square miles. It was in his survey of this earthquake that he made his greatest contribution to plate tectonic theory (see below). He also traveled to Australia where he succeeded in identifying evidence of glaciation in Late Paleozoic rocks.

Due to deteriorating health, Oldham left his post as superintendent and left India in 1903 to live in Europe. Nonetheless, his interest in earthquakes continued as he actively contributed to the scientific field long after he left Asia. For his accomplishments Oldham was awarded the Lyell medal of the Geological Society in 1908 and was president of the society from 1920-1922. He died in 1936.

Oldham made two enormous contributions to plate tectonic theory and geophysics in our understanding of what lies at the interior of the earth. In his report on the 1897 Assam earthquake he was able to identify three distinct seismic waves emanating from an earthquake epicenter on a seismic record. We know his discovery as P-waves, S-Waves and Surface Waves.  He also discovered that these three waves all travel at different speeds and paths as they move across or through the earth, which led to his second major discovery.

The second of Oldham’s great findings was the discovery of Earth’s core. He studied the propagation of seismic wave paths from Earthquakes originating all around the world and found that certain waves were refracted and changed speeds as they pass through the Earth’s interior while others were not. Oldham found that earthquake waves increased in speed as they moved deeper into the Earth, up to a certain point. At that point, below a certain depth, they suddenly move much slower. This indicated to him that the wave must be moving through a distinctly different material. By analyzing this evidence Oldham was not only able to show that the Earth has a core, but was also able to estimate its size using measurements from thousands of globally distributed earthquakes which showed the depth at which the waves changed speeds. 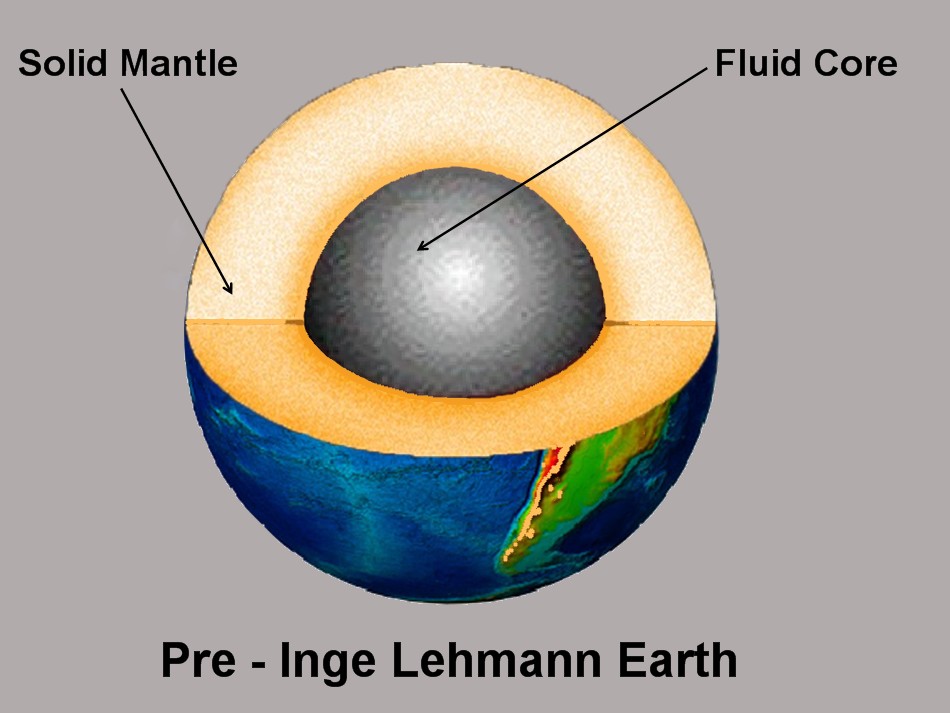 -   He identified the vertical displacement of strata due to earthquake motion, including a range of fault features that resulted from earthquakes. Above is a picture taken by Oldham in 1899 identifying the Chedrang fault that was uplifted 35 feet.

-   Identified evidence of glaciation in Late Paleozoic rock in Australia.

-   With his father, created a catalogue of Indian earthquakes from the “earliest time” to the end of A.D. 1869

-   Oldham published his seminal paper in 1906 – the same year as the Great San Francisco Earthquake.

-   His findings were the foundation that Inge Lehmann later used to discover the inner core and Mohorovicic used to identify the abrupt boundary between the crust and mantle.