John Milne with Russian seismologist Prince Boris Galitzin and his wife Tone Harikawa looking at one of his seismographs on the Isle of Wight in 1911.

John Milne was born on December 30th, 1850 in Liverpool, England.  He received his credentials to be a mining engineer after he attended King’s College and the Royal School of Mines.  He then started working in Europe and then Newfoundland as a mineral investigator.  In 1874, Milne went on a mining expedition to Sinai.  At the young age of 25, he became a professor at the College of Engineering in Tokyo, Japan.   His travels there were quite interesting.  It took him 11 months to travel there by way of land.  He wrote a book about his observations of the weather, the flora and fauna he encountered on his way to Japan.  He even traveled through Siberia and arrived in Japan in 1876. He was lucky enough to experience an earthquake on the first night of his arrival.  When he first arrived he was studying Volcanology( he climbed over 50 volcanoes) and continued to do so until 1877.  Then he attention diverted to the study of earthquakes.

Because of the deadly (~70,000)  earthquake and tsunami of 1755 in Lisbon Portugal, interest in earthquakes escalated in the next 100 years but this was still 100 years before the theory of plate tectonics.  Many scientists were looking for better ways to develop and collect data.

When he was 30, an earthquake hit Yokohama and this is when the Seismological Society of Japan was started.  Sir James Alfred Ewing, Thomas Gray and John Milne invented the first seismograph in 1880 after the earthquake in Yokohama.  This seismograph was a simple horizontal pendulum and it recorded the vibrations that happen along a fault line.  The following is a drawing of his first seismograph The two different types of waves are primary or secondary.  Each of these waves move at different speeds and are commonly referred to as P waves or S waves.  Remember that P waves are compessional waves and S waves are elastice waves

Milne was more recognized by the Japanese government than he was by his native country.  He decided to moved back to England after a fire in Japan destroyed his home in 1895.  He moved to the Isle of Wight with his wife, Tone.

Here is a partial list of Milne's seismographs by 1900. 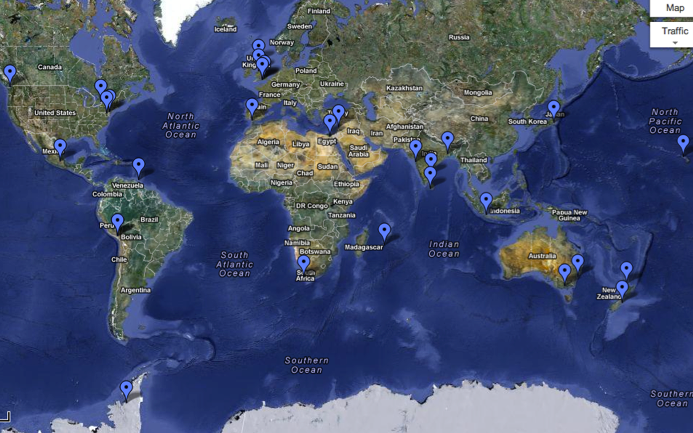 Shortly after they collaborated, John Mine died on July 31, 1913 from kidney disease.

He invented the first seismograph in 1880 and this lead the way for more data and observations to be gathered concerning earthquakes.  Another interesting fact is that he was able to seismograph sent to telegraphs stations around Japan.  This was the first data that was gathered for the fault line that is now called the Pacific Ring of Fire.  This would also add more fuel to the theory of plat tectonics a 100 years later.  Also known as the "Earthquake Milne"

Created the Seismological organization in Japan with Gray and Ewing.  All three were British scientist.  Then was elected Fellow of the Royal Society in 1887.

The relation of earthquakes to volcanoes and surface topography

He wrote a humorous travel story and a number of science fiction books. He was a wonderful storyteller and everyone that meet him loved hearing his stories.  He was a humorus man and loved by all.  He had a bushy, nicotine stained mustache and a loveable personality.