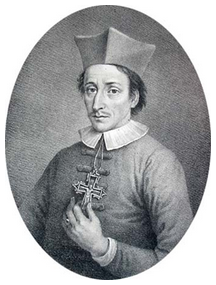 Nicholas Steno (or Nicolaus, or, in Danish, Niels Steenson) was born in Copenhagen on January 1, 1638 (O.S.).  He was born into a wealthy Lutheran family.  Steno experienced many different professions in his 48 years of life.  In 1660, he travelled to the University of Leiden in Amsterdam to study anatomy.  In 1665, Steno was appointed physician to Grand Duke Ferdinand II.  His position allowed him plenty of time to continue his research, and he was elected as a member of the Academia del Cimento (Experimental Academy).  This group consisted of researchers were inspired by Galileo in that they took an experimental and mathematical approach to research.  It was during this time that Steno turned his attention to geology.  In 1667, Steno converted to Catholicism.  He took holy orders in 1675, and his grueling work and self-deprivation as a bishop led to his early death in 1686. 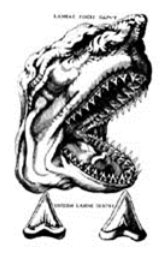 Steno’s contributions to geology and plate tectonics started with a shark head.  In 1666, a very large shark head was caught by two fishermen, and Duke Ferdinand asked Steno to dissect it.  Steno saw that the shark teeth were identical to glossopetrae (tongue stones).  These stones (which we know today to be fossils) were a bit of a mystery until Steno’s time.  Pliny the Elder had proposed that the “tongue stones” had fallen from the sky or the moon and so been embedded in rock.  Other scientists suggested that the fossils naturally grew in rocks.  Steno suggested that these stones actually once belonged to living animals.  Steno used an early version of atomic theory to theorize how the tissue became stone.  He thought that the corpuscles of teeth were exchanged for minerals bit by bit.

Once Steno proposed that fossils originally came from living things, he needed to explain how fossils ended up in the middle of rock.  This led to Steno’s most significant contribution to geology.  He suggested that all rock was originally formed as sediment was deposited from a fluid that covered the planet.  As the rocks were forming, animal remains could be trapped and converted to fossils.

This then suggested the principle of original horizontality - all rocks are originally horizontal and other processes can then tip, fold, and crack the rocks.  It also suggested Steno’s Law of Superposition (as it is known today).  The oldest layers of rocks are at the bottom and newer layers are formed on top of the old.  This means that geologists can read these layers as a time sequence.   Note that this does not allow dating of layers, as the time sequence is relative rather than absolute. 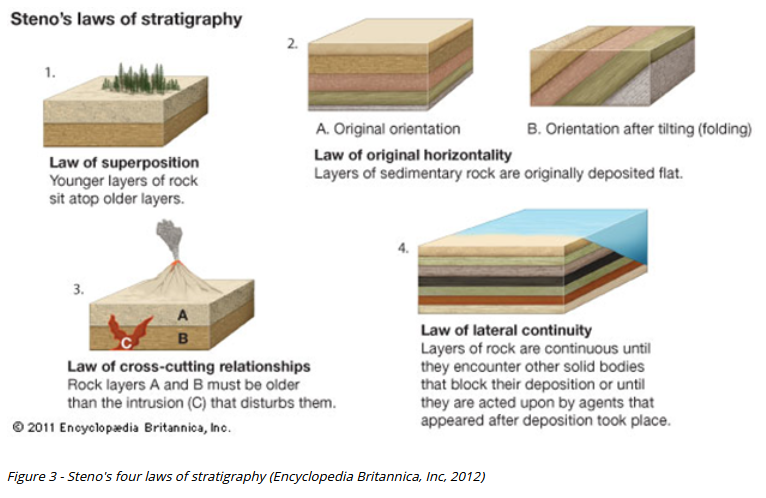 Steno’s ideas were published in 1669 in his De Solido Intra Solidum Naturaliter Contento Dissertationis Prodromus (the Prodromus of Nicolaus Steno’s Dissertation Concerning a Solid Body Enclosed by Processes of Nature Within a Solid), known simply as Prodromus.  His ideas were not widely accepted until a century later, but they are essential to geology as we know it today.  Without Steno’s idea that fossils came from living animals, Wegner would not have been able to use fossils to show that there were the same animals living on two sides of the Atlantic Ocean.  His Law of Superposition led to his title as the Father of Geology.

Steno's ideas should have provoked an outcry of opposition.  Steno's ideas lead logically to a conclusion of a much longer geologic history of the Earth than was accepted at the time.  However, from general reading and from the 1916 foreward of an English translation of Steno's Prodromus, there was very little disagreement.  The biggest reason seems to be that Steno himself worked very hard to fit his ideas into a biblical timeframe.  He also became an ordained member of the church himself around the time that his work was published.  This combination of events meant that his works seems to have been largelly set aside for over a century, thereby escaping severe criticism.

Other scientific contributionsSteno’s career started in anatomy.  He discovered and described the parotid salivary duct.  He also used geometry in order to demonstrate that muscles change shape but do not lose volume when they contract.  It was his work in anatomy that led to Duke Ferdinand sending the shark head to Steno.

Steno also provided the foundations for crystallography.  He noticed that different quartz crystals had different appearances, but every quartz crystal had the same angles between corresponding faces.

Figure 4 - Statue of Nicolaus Steno outside the University Library in          Copenhagen (http://static.panoramio.com/photos/large/2332917.jpg) 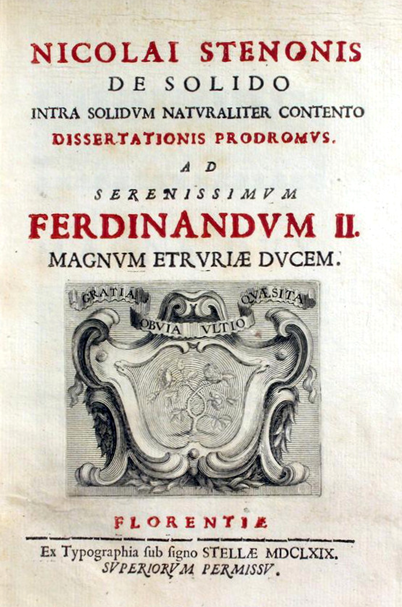 Steno's Catholicism meant that he had to reconcile his geologic observations with a Biblical history of 6,000 years.  He was able to do this by believing that most of the rocks were formed in the flood recorded in the book of Genesis.  In the Apenninne Mountains near Florence, he saw that the lower levels of rocks had no fossils while the upper ones were filled with fossils.  Steno believed that the difference between the levels was the flood - the fossils recorded in the upper levels were placed there during the flood.  While this is not an accepted view today, it does mark the first recorded attempt by a scientist to distinguish between different time periods based on geologic evidence.

For Steno, all publications had to be approved by Catholic censors.  The first censor who read Steno’s Prodromus passed it quickly, but the second took four months to approve the work.  During that time, Steno lost interest and never went back to scientific research.  The publication of his work only happened because it was arranged by Vincenzo Viviani.

Nicholas Steno was awarded saintly status in 1998 by Pope John Paul II.  Ironically, while Steno spent the last twenty years of his life performing charitable work with the Catholic church, what he is best remembered for is the work he did in his three years as a geologist.

Regents of the University of California. (2006). Nicholas Steno. Retrieved 2014, from University of California Museum of Paleontology: http://www.ucmp.berkeley.edu/history/steno.htmlSteno, N. (1916). The prodromus of Nicolaus Steno's dissertation concerning a solid body enclosed by process of nature within a solid: an English version with an introduction and explanatory notes by John Garrett Winter. With a foreward by William H. Hobbs. New York: The Macmillan Company.   Retreived 2014, from Open Library: https://archive.org/stream/prodromusnicola00stengoog/prodromusnicola00st...

University of California Museum of Paleontology. (2014). Fossils and the Birth of Paleontology: Nicholas Steno. Retrieved 2014, from Understanding Evolution: http://evolution.berkeley.edu/evolibrary/article/history_04