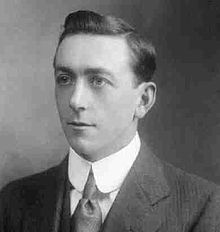 "This is a picture of young Arthur Holmes after his studies at the Royal College of Science."
Photo Source: Wikimedia Commons

I selected renown Geologist Arthur Holmes, because of his geological contributions to the scientific community. Holmes continued the works of Wagener elaborating the continental drift theory, which is now known as plate tectonics. Holmes also revolutionized the way we carbon date within the Geology Field through radioactive dating. In addition, Holmes was a renowned scholar at several Universities in England. Still today scientist base their geological theories and methods from Arthur Holmes life works and achievements. Holmes theoretical thinking was beyond his time and while his peers occasionally opposed his theories, Holmes work was subsequently proven to be on point.

British Geologist Arthur Holmes was born in 1890, in the small town of Gateshead United Kingdom where he spent his childhood. At the age of 17, Arthur Holmes attend Gateshead Grammar School before enrolling into the Royal College of Science or The Imperial College London, where he studied Physics. In Arthur’s second year of school he was introduced to geology, which later became his passion. After graduating from college Holmes found work in Africa as a mineral prospector, which he had little success. Within six months of arriving in Africa Holmes became extremely ill with malaria from mosquitos. Meanwhile, Holmes family and friends where told that Holmes had died in Africa, which they mourned his thought to be death. Within a few months Holmes gathered enough strength to voyage back to London where he surprised his family and friends. Soon after his return Holmes was offered a position at the Imperial College London as an activist in 1912. Holmes earned Doctoral Degree of Science in 1917. 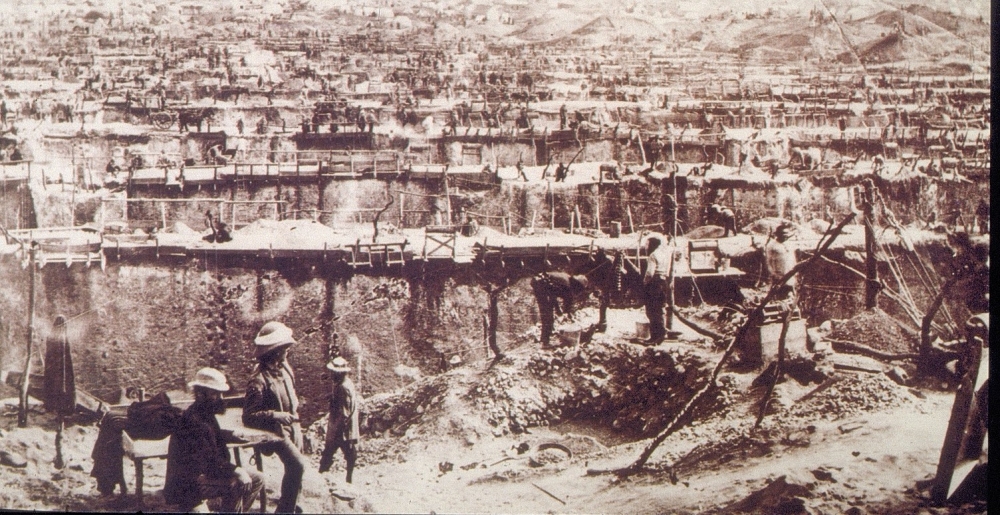 "This image portrays a gemstone mining site in Western Africa, one like Holmes would have spent time at as a prospector after graduating from college."
Image Source:

English geologist Arthur Holmes made not one but two major contributions to our under-standing of how the Earth works. He was the first earth scientist to grasp the mechanical and thermal implications of mantle convection, and he widely applied the newly-developed method of radioactive dating to minerals in the first attempt to quantitatively estimate the age of the Earth.

Holmes advocated the theory of continental drift fostered by Alfred Wegener at a time when it was profoundly unfashionable with conformist. One problematic concern with the theory was the mechanism of movement, which Holmes advised that Earth's mantle contained convection cells that dissipated radioactive heat and moved the crust at the surface. Holmes in his Principles of Physical Geology concluded with a chapter on continental drift. Portion of the model was the concept of the origin of the seafloor spreading. Like Wagener, one of the most remarkable attribute about Holmes is he proposed his hypothesis at a time when continental drift was not accepted within the scientific community. Holmes knew his hypothesis to continental drift theory needed to necessitate more evidence in order to either disprove or prove. Holmes was solely looking for the primary mechanism to explain how identical geological and biological evidence could occur on two different continents across an ocean. Holmes’s hypothesis not only produced a mechanism by which the continents could move, it also provided a probable explanation for continental rifting and mountain formation. Holmes primary contribution was his proposed theory that convection occurred within the Earth's mantle, which explained the push and pull of continent plates together and apart. He also assisted scientists in oceanographic research in the 1950s, which publicized the phenomenon known as sea floor spreading. Soon after in the 1960's the theory of plate tectonics was established.

Before Arthur Holmes earned his Doctoral Degree in 1913, Holmes had already formed the first geological time scale. Holmes used a relatively new discovery of radioactivity to assist him in the creation of the Earth’s geological time scale. By using his newly quantitative time scale and other scientific factors, he made an estimate of Earth's age that was far older than his colleagues had suggested until the present calculation of 4 billion years. His initial estimates of Earth's eras have held up remarkably well over time: For example, he placed the beginning of the Cambrian period at around 600 million years ago; today 590 million years is the time frame largely accepted. Holmes was known as the "Father of Geological Time Scale".

In the early 20th century, a young Holmes had instituted the use of radioactivity in calculating the age of the Earth. Because radioactive decay happens at a steady rate, it enables us to date rocks by measuring the amount of the original unstable element and the resulting "daughter" element. Early attempts to date rocks in this way measured the amount of helium given off in the decay process, but when scientists realized that they couldn't capture all the helium, the young Holmes pointed to an alternative solution. Holmes achieved creditability upon him demonstrating his dating capabilities early on by estimating rock samples from various geologic periods. He gave a Carboniferous sample an age of 340 million years, a Devonian sample an age of 370 million years, and a Silurian sample an age of 430 million years. All three estimates fall with the time spans given by present-day geologists for those periods. Holmes spent the rest of his career refining his estimate numbers. His final number was ultimately overturned by other scientists in the 1950s, who estimated an age of over 4.5 billion years, but he laid the groundwork for radiometric dating. 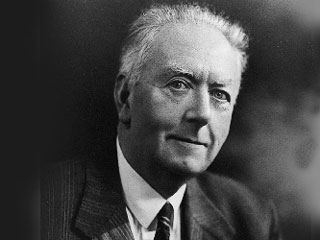 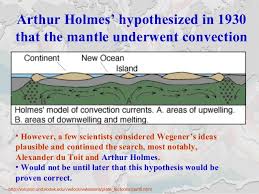 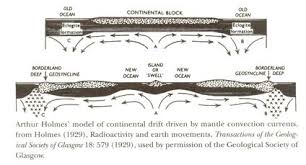 "These are images of Holmes' hypothesis of 1930, where he theorized the concept of mantle convection. His image of the theoretical perspective that rock recycled itself into the mantle at subduction zones, and then reproducing rock up from the mantle through the Earth's crust." Although his theory was later proven to be correct, his peers were skeptical about this theory due to lack of mechanical physical evidence. Holmes' hypothesis of a recycling mantle provided the physical evidence of modern-day plate tectonics."
Photo Source: Planet Terre

In 1944 he published the first edition of his Principles of Physical Geology, which became a standard text-book in the UK and elsewhere.

Other cool stuff you should know: 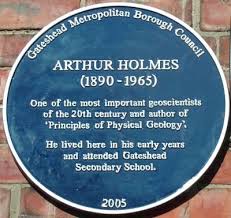 "This is an image of a crater on the Planet Mars, which was named after the Geologist Arthur Holmes. There are many craters on Mars that are named after a famous scientist. It was one of the greatest honors bestowed on Arthur Holmes and his family in recognition of his contributions to geology and science."
Photo Source: i.ytimg.com/vi/ZiQWUMqPAhY/maxresdefault.jpg

"Complete and Updated Biography for Arthur Holmes." A Collection of the Most Interesting Biographies - Updated and Complete. Web. September 6, 2015.http://www.browsebiography.com/bio-arthur_holmes.html