The biogeochemical cycle in which carbon is exchanged between Earth’s terrestrial biosphere, hydrosphere, geosphere, and atmosphere is called the carbon cycle. The global carbon budget is the balance of the fluxes of carbon between these four reservoirs. The terms source or sink define whether the net carbon flux is out of or into the reservoir, respectively. 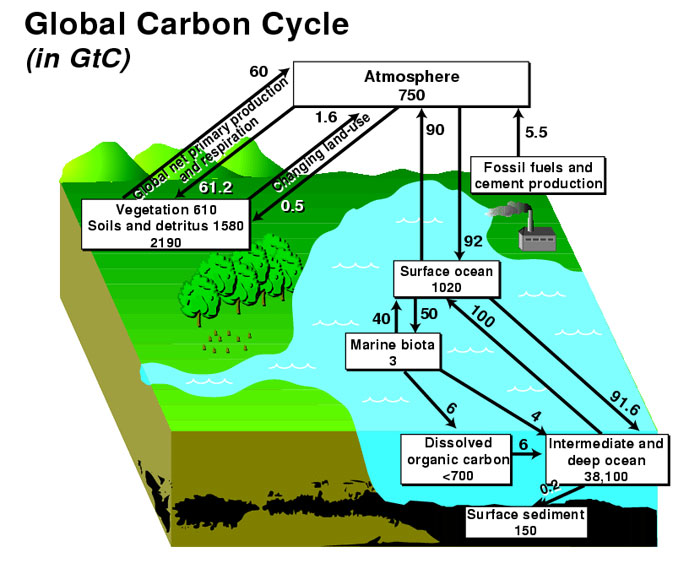 Schematic representation of the global carbon cycle, showing the stores of carbon and the fluxes (exchanges) of carbon between them. Note: GtC = gigatons of carbon.
Source: Met Office. Accessed 26 February 2008.

The carbon cycle is of interest to understanding climate because it includes two of the most important greenhouse gases: carbon dioxide (CO2) and methane (CH4). Most atmospheric carbon is in the form of CO2, while CH4 is present only in trace concentrations. Because CO2 is chemically inert, it is relatively well mixed within the atmosphere away from forest canopies, whereas CH4 is chemically active and is removed quickly from the atmosphere through oxidation to CO2 and water. The overall atmospheric concentration of these greenhouse gases has increased during the past century and contributed to global warming.

Carbon is removed from the atmosphere through:

Carbon can be input to the atmosphere by a variety of processes, including:

Inorganic carbon is readily exchanged between the atmosphere and ocean, exerting an important control on the pH of ocean water. Carbon is released to the atmosphere at oceanic upwelling sites, whereas regions of downwelling transfer carbon from the atmosphere to the ocean. When carbon (CO2) enters the ocean, carbonic acid is formed by the reaction: CO2 + H2O = H2CO3. Carbonic acid dissociates to form bicarbonate ions (HCO3-), the form in which most of the carbon in the oceans exists; lesser amounts of carbon exist as carbonic acid (H2CO3 or dissolved CO2), and carbonate ions (CO32-) paired with calcium and magnesium and other cations. Marine organisms build their skeletons and shells out of the minerals calcite and aragonite (CaCO3) through the incorporation of bicarbonate ions. These minerals dissolve after the death of the organism, but some of the material settles to the sea floor where it can be buried and stored in the form of limestone.

Carbon in the Biosphere

Carbon is an essential part of life on Earth. It plays an important role in the structure, biochemistry, and nutrition of all living cells. Autotrophs are organisms that produce their own organic compounds using carbon dioxide from the air or water they live in. This lifestyle requires an external source of energy, for example, the absorption of solar radiation in the process called photosynthesis, or the exploitation of chemical energy sources in a process called chemosynthesis. The most important autotrophs for the carbon cycle are trees in forests and phytoplankton in the ocean.

Large quantities of carbon pass between the atmosphere and biosphere on short time-scales: the removal of atmospheric carbon occurs during photosynthesis, following the reaction CO2 + H2O = CH2O + O2, while most carbon leaves the biosphere through respiration, a reversal of the previous reaction in which an amount of energy equivalent to that absorbed during photosynthesis is released as heat. When oxygen is present, aerobic respiration occurs, which releases carbon dioxide into the surrounding air or water. Otherwise, anaerobic respiration occurs and releases methane into the surrounding environment, which eventually makes its way into the atmosphere or hydrosphere.

The biosphere is capable of storing ~10% of atmospheric carbon at any given time. However, carbon storage in the biosphere is influenced by a number of processes on different time-scales: while net primary productivity follows seasonal and annual cycles, carbon can be stored up to several hundreds of years in trees and up to thousands of years in soils. Changes in those long-term carbon pools may thus affect global climate change (view this example of changes to soil).

Carbon in the Geosphere

Organic and inorganic carbon reservoirs in Earth's crust are large with long residence times. Carbon enters the geosphere through the biosphere when dead organic matter (such as peat or marine algae) becomes incorporated into fossil fuels like coal and organic-matter-rich oil and gas source rocks, and when shells of calcium carbonate become limestone through the process of sedimentation briefly described above. These carbon reservoirs can remain intact, that is, the carbon can remain stored within them, for many millions of years. Eventually, most rocks are uplifted and subjected to exposure to the atmosphere where they are weathered and eroded, or they are subducted, metamorphosed, and erupted through volcanoes, returning the stored carbon back into the atmosphere, ocean, and biosphere. Our society's dependence on fossil fuels bypasses this natural process by moving as much carbon from the geosphere to the atmosphere in a single year as what might otherwise require hundreds of thousands or millions of years. In Pennsylvania, when we strip mine and burn coal we are in effect releasing the atmospheric carbon dioxide and stored energy of the sun that has been buried for over 300,000,000 years!

On a trip to Bear Meadows, near the University Park campus of Penn State, I describe atmospheric carbon and organic carbon storage in the Critical Zone.

Click here for a transcript of the Trip to Bear Meadows Video.

TIM WHITE: I've traveled to Bear Meadows, a national natural landmark, about eight miles southeast of Penn State's main campus in central Pennsylvania. I've brought you here today to describe the relationship between atmospheric carbon dioxide content and organic carbon storage at the surface of the Earth within the critical zone. Let's go have a look at the bog.

Bear Meadows is a peat bog that began forming nearly 10,000 years ago, shortly after northwestern and northeastern Pennsylvania were covered by vast ice sheets that extended far to the north into the Hudson Bay region and Canada. The closest those ice sheets reached to State College and the Penn State campus here was northeast of Williamsport, nearly 30 miles away. One of the tasks I'd like to accomplish while we're here is to probe the peat in the bog and have a look at what it's made of, and so to do that I'm going to walk along the edge of the bog-- in the background you can see where I'm going to go-- and I'm going to get my soil auger so I have a way to probe and sample the peat.

This wet, boggy setting is perfect for the preservation of organic matter and organic carbon. If you look beneath the water's surface, you can clearly see various organic constituents related to the plants that live around in the bog. I can see maple leaves and abundant roots associated with these grasses. If plants die and their various organic constituents are preserved, as is the case here in the bog, the original carbon in the atmospheric carbon dioxide that was photosynthesized by the living plant is also stored or preserved, rather than being returned to the atmosphere through decay. We call the site of such processes a carbon sink.

Further out in the bog, there are places where 15 feet of peat have accumulated over the last 8,000 or so years. That means that 8,000 years ago, carbon was removed from the ancient atmosphere, stored here in the peat, and remains today. One last thought before we leave and that relates to the time scale of organic carbon storage in the critical zone. I've told you that organic matter has been accumulating here over the last 8,000 years, but this setting exists within the Appalachian Mountains and the fate of mountains ultimately is to be eroded, which is happening to these mountains today. So while this organic carbon remains stored here now, over long geologic time scales-- hundreds of thousands to millions of years-- this peat will be oxidized and that ancient organic carbon would be returned to our modern atmosphere.

Next, visit a Pennsylvania coal seam and nearby electric generating station to learn about the relationship between Bear Meadows and the burning of coal.

Click here for a transcript of the Visit to a Pennsylvania Coal Seam Video.

[Tim is standing next to a coal seam.]

The geologic, economic, and cultural history of Pennsylvania is steeped in this state's naturally occurring abundance of coal. To give students an opportunity to view coal in its natural setting, I like to come here, Curwensville Dam, about 45 miles northwest of State College.

[Here you can see two coal seams, one directly in front of me and one a little bit further up on the slope. Coal is peat that's been deeply buried in the earth and subjected to high pressures and temperatures. Remember at Bear Meadows, we looked at peat and we were able to see the various plant constituents from which it's made.

We also discussed that those plant constituents at the bottom of the bog were 8,000 years old and contained 8,000-year-old atmospheric carbon dioxide. These coal seams are over 300 million years old. They formed from vast peat swamps that existed along the margins of a large interior seaway that flooded much of North America at the time. So when we dig up and mine these coals, and use them to fire our electric generating stations and the computers you're using today to view this video, we're releasing 300 million-year-old carbon dioxide into our present-day atmosphere.

[looking out a car window at the Shawville Generating Station]

We're approaching the Shawville Generating Station. At this power plant, which is just about 15 miles from the Curwensville coal outcrop we just visited, coal is burned to produce electricity for local and regional consumption.

[Dr. White standing in front of the generating station]

At numerous coal-fired electric generating stations around the state, coal is burned to produce electricity. And it's through this process that Pennsylvania produces 1% of total global human carbon dioxide emissions in any given year.

In subsequent lessons, we will examine and discuss the effects of anthropogenic carbon dioxide emissions and climate change on critical zone processes.