Unique landforms and patterns of drainage called karst or karst topography primarily form in temperate to tropical regions, though they are found in arid and polar regions too. The common feature shared by all karst landscapes is that they are underlain by chemical sedimentary rocks particularly susceptible to dissolution, carbonates and/or evaporites. The landforms result mostly from chemical weathering of the host rock and the progressive integration of subsurface cavities, though collapse into solution cavities can also be important. Karst landscapes are often dominated by underground drainage networks that interrupt and capture surface water flow. 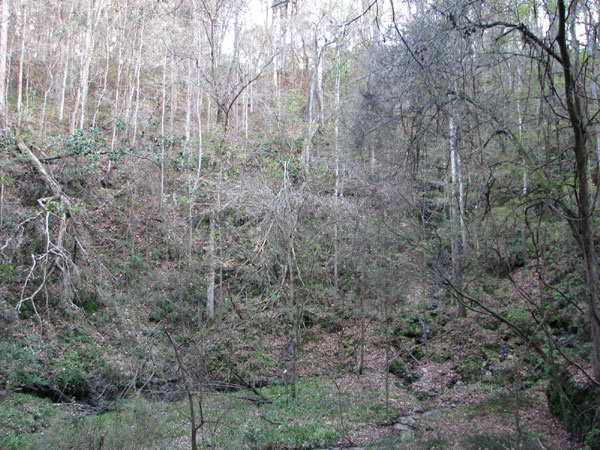 Looking up from the bottom of the Devil's Millhopper sinkhole near Gainesville, Florida; approximate depth ~ 100'.
Credit: Tim White, 2008. 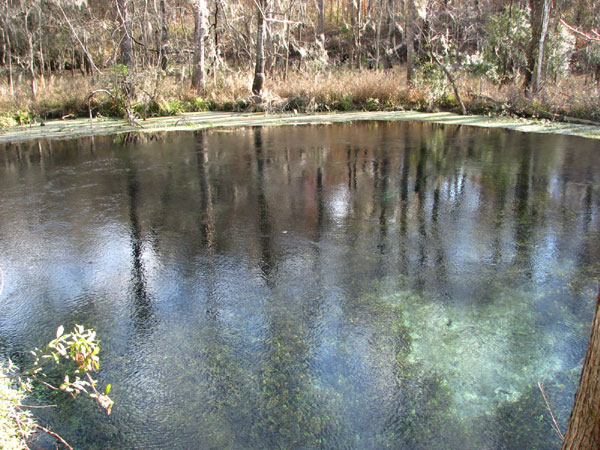 Ichetucknee Spring, which discharges ~2700 gallons per second or more than 230,000,000 gallons per day, is one of many first magnitude karst springs in Florida.
Credit: Tim White, 2008.

For a relatively succinct definition of karst, from the Canadian perspective, follow this hyperlink:

Of the karst-forming rocks, the carbonates (dolostone and limestone) are much more abundant than evaporites (mostly deposits of gypsum and anhydrite), therefore karst landscapes are most often found in regions underlain by carbonate rocks. The following Web site will help you learn more about limestone karst, including information on the relationship between lithology, porosity, permeability and karstification, the distribution of karst lands in the United States, the driving mechanics of karst processes, and links between surface water flow, aquifers, and groundwater.

To learn about the distribution of karst landforms in central Pennsylvania, the relationship to lithology, and groundwater flow, watch the following video of my visit to Tussey Sink.

Click here for a transcript of the A Visit to Tussey Sink Video.

TIM WHITE: We're now in that portion of the course where we're considering landforms and how critical zone processes differ on different parts of the landscape. Much information can be gleaned from the study of geologic maps. For example, in this geologic map of the eastern half of the United States, you can clearly see parallel, curving lines that highlight the Appalachian Mountains. Geologists recognize this map pattern as characteristic of folded and faulted strata, the valley and ridge province, similar to what you'd form if you compress and folded a floor rug.

In this lesson, we'll focus on limestone and dolomite, within the variety of rock types in the Appalachian Mountains. In the closeup map of Pennsylvania, you can clearly recognize parallel, curving lines similar to the ones we viewed in the Appalachian Mountains, but here those lines highlight regions underlain by limestone. Next, we'll make a site visit to take a closer look at landforms associated with limestone.

Welcome to Tussey Sink. We've driven about 10 miles southeast of the geology building at Penn State, where we just looked at some geologic maps of the US and Pennsylvania. And now we have in front of us a much finer detail map, a 7 and 1/2 minute quadrangle map of the Centre Hall region. You can see in the upper left-hand portion in the map, there are a number of parallel lines. And in the lower right-hand portion of the map, similar parallel lines. Whereas in the central part of the map, there are a bunch of dots superimposed on those parallel lines. And it's these dots that are the focus of our lecture today because one of them sits behind us here, Tussey Sink.

Now let's think about this map in a little bit more detail. Here we are at Tussey Sink. And I want you to notice that we're on the edge of this zone that I earlier referred to as containing all the dots. In the upper left-hand corner of the map, where there are no dots, is Nittany Mountain, which you can see in the background. And in the lower right-hand corner, again where there are no dots, behind us, you can see Tussey Mountain.

It's important for you to understand that there are similarities between the bare portions in the map and that these two regions in the map are different from the portion that contains all the dots. The areas that are bare, that is the two ridges we pointed to earlier, are both underlain by shale and sandstone. Whereas this area covered by these dots is underlain by limestone.

Now let's take a walk into Tussey Sink and have a look at the rock types that are contained within it. We have walked about thirty feet from the car into the sinkhole, and we're beginning to descend towards the bottom of it. The first thing I'd like you to notice is that you can see water-- and I'm pointing off to my right, upstream-- that flows down off Tussey Mountain into this sinkhole feature. And if you look over here to my left, there is no more water. And there's a reason for that. That is, there's a reason for this dry stream bed. And that's visible, again over here to my right, where you can see that rock outcrop. That outcrop is limestone, which has a conduit in it, into which that stream disappears.

Conduits like this, and this entire sinkhole that we're within, are unique to limestone terrains. And so what is it about limestone that leads to the formation of these unique features? Well, as geologists, we use hydrochloric acid as a means of verifying whether or not a rock is limestone. And here you can see, when I put hydrochloric acid onto this rock, there's a very vigorous reaction that leads to the formation of carbon dioxide bubbles. This is unique to limestone. Over time, the reactions like this that naturally occur, from dilute carbonic acids formed in the atmosphere, cause the dissolution of limestone and the formation of these features.

We're looking at the water flowing into this hole, or conduit, in the limestone. And it's important for you to recognize that we're in the midst of a very dry fall here in central Pennsylvania. Under normal stream flows, this hole would not be able to accept all the water that flows down this stream channel. And the stream would continue down in the direction I'm pointing, into the dry area that you saw from above. Further downstream from there is the terminus of this sinkhole complex, into which even in the highest flood stages this stream disappears into the subsurface.

Now we're gazing down into the terminus of this sinkhole complex. And it's at this point that, even in the highest flood stages of the stream we were just looking at, it entirely flows into the subsurface here.

It's late November, and we've returned to Tussey Sink after substantial rainfall. You can see that the stream runoff into the sinkhole complex is much greater than earlier in the fall. We followed a leaf as it flowed down the stream and doubled back into the crevice we talked and spoke about earlier in the semester. You can see that the capacity of the crevice to receive the stream flow has been exceeded. Not just because of the limited size of the crevice, but also because it's clogged with leaves and twigs. And so the remaining stream flow is flowing down through the stream channel behind me and into the main sinkhole of the Tussey sinkhole complex.

Remember, we began this lesson by looking at the Centre Hall 7 and 1/2 minute quadrangle map. And on that map I showed you that there were regions in which there were no sinkholes developed, those were the ridges underlain by shale and sandstone, and then the valley where the limestone was, where we just came from. This is a small quarry within the shale that was excavated to build the road that we drove here on. But the important thing to understand is that shale is not subject to dissolution, and therefore, there are no sinkholes developed on the shale terrain.

Remember that earlier we talked about the capacity of different rock types to dissolve under the influence of acid. I'm going to do my acid test again. Let's see what happens.

Some basics of karst processes and landscapes focused on caves are presented at Teachers' Domain as "Introduction to Caves and Karst."