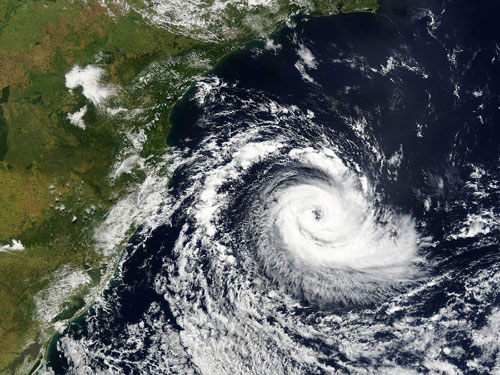 Atmospheric processes and climate (primarily precipitation and temperature) may be the most influential of the factors involved in soil formation because they control weathering over large geographic regions. Bedrock parent material is subjected to physical weathering and disintegration through expansion and contraction associated with wide temperature fluctuations. The presence of water enhances this effect through freezing, thawing, and chemical processes—chemical weathering is accelerated under warm climate settings. In addition, solute and particulate (dust) deposition from the atmosphere plays an important role in Critical Zone and soil biogeochemistry. While continents are more impacted by atmospheric deposition, strong contrasts exist between bedrock and atmospheric sources in ocean island soils.

Climate, as one of the state factors of soil formation, is controlled to a large extent by atmospheric processes dependent on the latitudinal position on Earth. To properly understand the varying effects of climate on the Critical Zone, we must understand Earth's atmosphere and the range of phenomena that occurs within it. The focus of our next three lessons (Lessons 3, 4, and 5) is on understanding the atmosphere and climate systems. In Lesson 3, we will explore the basic structure of the atmosphere, the carbon cycle, basic atmospheric chemistry, atmospheric carbon dioxide and greenhouse gases, radiative forcing, and physical climate processes and feedbacks. In Lesson 4, we will turn our attention toward the evolution of Earth's atmosphere and ocean system through geologic time, specifically focused on our understanding of paleoclimatology (ancient climates). In Lessons 4 and 5, we will consider potential lessons from this knowledge of ancient climate and regional climate issues, in particular how this knowledge can aid our predictions of, and planning for, future climate change. Finally, we will consider how all this knowledge of past, present, and future climate processes is linked to soil formation and the Critical Zone, a topic we will return to in the final lesson (Lesson 12) of this course.

I visited the Adirondacks in upstate New York to examine climate, the hydrologic cycle, and some of the ways in which the forests interact with the Critical Zone during the winter season. Take a look at the video clip below of my visit to the Adirondacks.

Video: A Visit to the Adirondacks with Tim White (3:10)

Click here for a transcript of the Visit to the Adirondacks Video.

TIM WHITE: Hello. I've driven about nine hours north from State College into the northern part of the Adirondack Park in upstate New York. And I'm here to visit my sister, who I've just skied with, out onto Middle Saranac Lake. In the background, you can see of our favorite mountains-- Ampersand Mountain. This is Bodie stumbling around in front of us.

But I thought that while I'm here, I would take advantage of the wintry weather that they're experiencing here that we're not having in central Pennsylvania, to talk to you a little bit about climate and also about the hydrologic cycle and some of the ways in which the forests interact with the critical zone during the winter season.

The difference between weather and climate is an elusive concept for some people, so I'm going to try to describe it to you.

Recall that just moments ago, the sky was clear, and the sun was out to the east. But now, we're in the middle of a nice snowfall. This is an example of the weather. Weather, to me, describes the physical conditions in the atmosphere, and those conditions can change rapidly on time scales of hours to days from region to region and also through time.

Climate, on the other hand, describes prevailing weather trends in a region typically considered over years to decades. So while the weather is different today between the Adirondacks and central Pennsylvania, both regions are characterized as having a humid temperate climate.

One of the things that's unique about the Adirondacks compared to central Pennsylvania is that the mountains, and the topography, and the elevation. So this geographic component is important to understanding climate.

So mountainous regions further from the coastlines typically have colder, longer winters than areas closer to the coast at lower elevations like central Pennsylvania.

In mid- to high-latitude regions that experience a truly cold winter season, critical zone processes slow down and in some cases cease to function. For example, in the frozen Adirondacks, the water that in other seasons would percolate into the subsurface's ground water or flow through the rivers and lakes of the region, is temporarily stored as ice and snow at the surface until temperatures warm, thaw occurs, and critical zone processes begin anew.

We'll reconsider seasonality in later lessons when we discuss the hydrologic cycle and biotic functioning of the critical zone.

By the end of the unit, successful students will be able to:

If you have any questions, please post them to our Questions? discussion forum (not e-mail), located under the Discussions tab in Canvas. I will check that discussion forum daily to respond. While you are there, feel free to post your own responses if you, too, are able to help out a classmate.