Salt as a Commodity

We won't dwell too much on salt as a commodity here, but it is an interesting topic for students because salt has played such an important role in human history. There is an excellent book on the subject by Mark Kurlansky titled Salt: A World History. It has extensive information on the uses of salt through the ages, what makes good salt, trade routes, the historical monetary value of salt (Roman soldiers were paid in salt!), the role salt has played in wars, and so on.

Although salt is mined from strata on land (this salt represents the remnants of ancient oceans that have evaporated and left their salts behind), much is now produced from the evaporation of seawater in carefully monitored salt pans. In the United States, salt mines can be found in New York state (around the Finger Lakes) and New Mexico (near Albuquerque). There is a saltworks (evaporative) in San Francisco Bay (see below). These are the Cargill saltworks near Hayward, California where salt production goes hand-in-hand with wetlands preservation. The reddish ponds are the most highly evaporated--red color is a "bloom" of a salt-tolerant species of photosynthetic dinoflagellates. Most of the active saltworks are in lower latitudes such as Baja, California. The oldest known salt mines are found near Krakow, Poland.

It is intriguing that we can't drink seawater as a means to get our salt (see later section on salt in seawater), but we are totally dependent on this source for the salt our bodies do (and don't) need, whether from ancient oceanic deposits or modern evaporative ponds. There is a good source of information online about salt (follow this link). 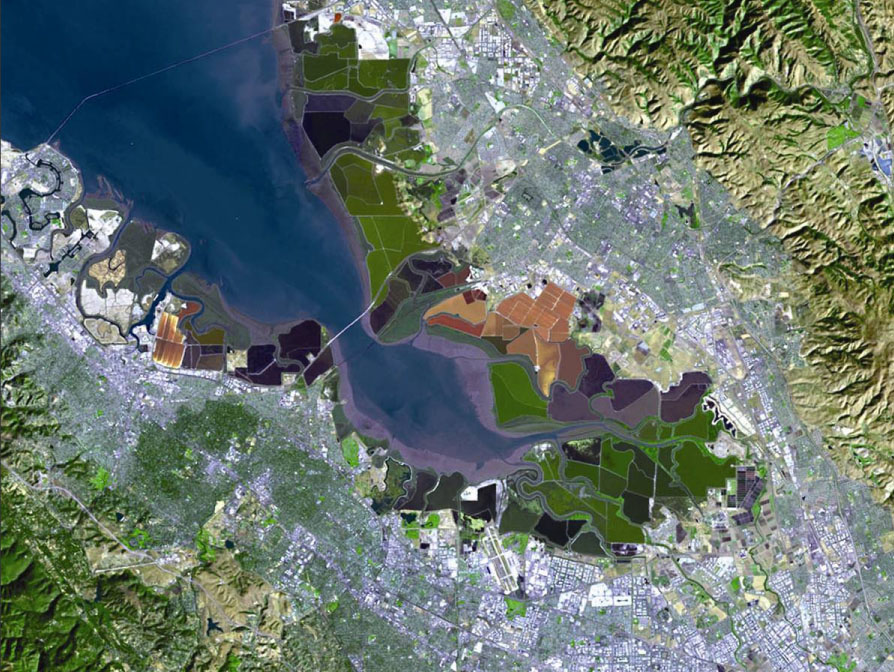