These are the relevant physical properties of water and their significance--all of which are shaped by the hydrogen bonding between polar water molecules:

Heat capacity and latent heat are key properties that allow water (the oceans in particular) to play a major role in "regulating" Earth's climate. Water absorbs solar energy and releases it slowly; thus, larger bodies of water do not change temperature rapidly. Likewise, the high latent heat of vaporization (see below), indicates that when water vapor (derived from evaporation of water at the ocean's surface driven by solar energy receipt at low latitudes) condenses into liquid droplets at high elevations or high latitude, the latent heat is released into the environment. In Lesson 4, we will examine this role in more detail, and we have already alluded to the fact that large lakes can help buffer temperature changes.

Latent Heats of Melting and Vaporization(refer to figure below)

Next to mercury, water has the highest surface tension of all commonly occurring liquids. Surface tension is a manifestation of the presence of the hydrogen bond. Those molecules of water that are at the surface are strongly attracted to the molecules of water below them by their hydrogen bonds. If the diameter of the container is decreased, the combination of cohesion, which holds the water molecules together, and the adhesive attraction between the water molecules and the glass container will pull the column of water to great heights. This phenomenon is known as capillarity. This is, in part, what allows plants to stand up--when too much water is lost by evapo-transpiration, they wilt. 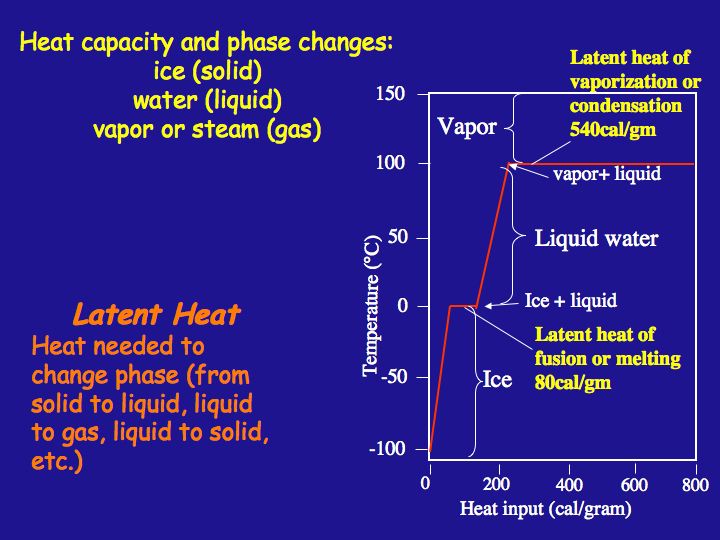 Click for a text description of the heat capacity and phase changes image.

Liquid water from 0 to 100 degrees

‹ Salt as a Commodity up Water as the Universal Solvent ›
EARTH 540: Essentials of Oceanography