Please read Chapter 7 in the text (Consumer Choice and Elasticity) to accompany the material in this section.

Economics is a dynamic process. Given the millions of human interactions that make up an economy, it is not surprising that things do not stay the same for very long, if at all. Things change: this is the nature of a dynamic economy. We now ask, how much do they change?

At this point, this question relates to the shapes and slopes of the demand curves, which we will examine here. We will look at the supply curve in the next lesson.

The Greek letter eta, , is used to denote elasticity.

The notation is shorthand for "percent change in price", where the Greek letter delta denotes the change in something. This equation is also called “endpoint” elasticity.

A percent change in some variable is: .

For example, if the price of a bag of Doritos rises from 99 cents to $1.29, then the percent price change will be:

We can also define a “point” elasticity. If we shrink the interval between Q1 and Q2, we end up not using the distance between two points, but instead we have the reciprocal of the slope of the line multiplied by the ratio of the values of P and Q at the point in question. The slope of a line on a supply and demand diagram will be , but because we are interested in the change in quantity that comes from the change in price, we examine the reciprocal (1 divided by the value), of . Because we want to cancel out any units, we have to multiply this slope by the actual values. So, if we look at the point elasticity at a point (Q1, P1) then we would calculate it as:

This particular demand curve is illustrated in the following diagram: 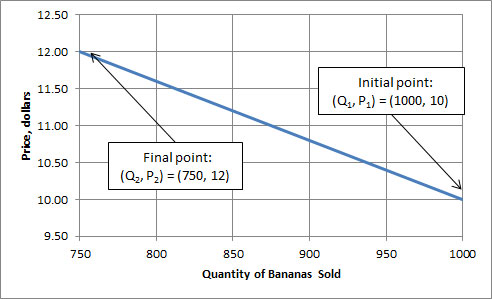 1) Using the original formula, we get:

2) Using the midpoint formula, we get:

So, these numbers are quite different.

If something only stretches a small amount under pressure, then we say it is inelastic. In economics, we say that a good is inelastic if its quantity demanded does not change very much with a change in price. On a supply and demand diagram, an inelastic good is one that has a very steep slope. This is shown in the following diagram: 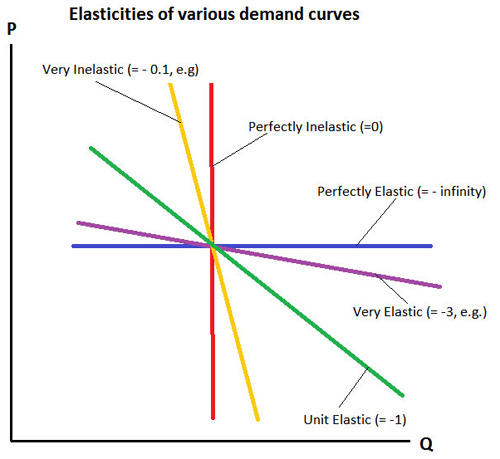 Typically, goods that are thought of as necessities will be very inelastic. That is, no matter how expensive they get, we will still buy them. Health care, staple foods and gasoline are goods with low elasticities. If a demand curve is perfectly vertical (up and down) then we say it is perfectly inelastic. If the curve is not steep, but instead is shallow, then the good is said to be “elastic” or “highly elastic.” This means that a small change in the price of the good will have a large change in the quantity demanded. If the curve is perfectly flat (horizontal), then we say that it is perfectly elastic. Luxury goods are often very elastic – if the price increases a little, then people will move over to something else.

Remember that the elasticity is a ratio of percent changes in quantity and price.

Also, remember that all elasticities of demand will be negative, since the demand curve slopes downwards.

So, if we say that the elasticity of gasoline is -0.1, how much less gasoline will we consume if its price increases 10%?

Assume demand function for a product in a hypothetical market is P = 40 – 4Q. Calculate the price elasticity of demand when price increases from $16 to $20.

Some sample elasticities (from the real world):

So, let's think for what these numbers mean. The elasticity of gasoline (or, if I want to be complete and formal, the price elasticity of demand of gasoline) is -0.04. Put another way, this means that if the price increases 1%, the quantity that the public wants to purchase only goes down 0.04%. Or if we scale these numbers up, we can say that if the price increases by 100% (that is, it doubles), then the quantity consumed only falls by 4%. So, if gasoline gets a lot more expensive, people will still use almost as much, at least in the short term. This is because most of us don't have a lot of choice about using gasoline (in the short term - more about what "short-term" means a bit later). A lot of us don't have the option of using less gasoline, because we still need to get to the store and to work, and so on. Gasoline was more than twice as expensive in 2012 as it was in 2002, but we used about the same amount.

The number for long-distance phone service was also quite inelastic, because back in 1995 we didn't have a lot of options. Today, this number would be very different. Now we have cell phones that don't charge by how far you are from the caller, and we have Skype and we have VOIP and we have iPhones with video talk and we have webcams, and we have cable companies offering calling plans, and we have people talking about setting up communications networks on power lines, and so on.

Looking at the number for movies, we see that it has a high value (actually, because it is a negative number, it's actually smaller, but it is bigger in absolute terms). This means that if the price goes up 1%, then the quantity demanded goes down by 3.4%. This is because movies are somewhat of a luxury, and there are usually plenty of alternatives.

We'll talk a lot more about the reasons behind these elasticities in Lesson 4 when we talk about market dynamics or what happens to supply and demand when we consider the effects of time and of the costs of other things. The important thing to take from this lesson is just to understand what a demand curve is, and how we measure just how much the quantity of a good demanded changes with the price of the good.