Please reread "Characteristics of a Monopoly" on pages 210-213 in Chapter 11 for this section.

In a competitive market, we expect firms to compete with each other until the point where marginal cost increases to match the demand curve at the equilibrium point. For this situation to be able to occur, we make the assumption of upward-sloping supply (marginal cost) curves. This is a reasonable assumption to make, because as production of some good increases, the cost will increase because we have to compete with other goods for consumption of the inputs. That is, if we want to open a factory to make more detergent, we will have to hire workers, and assuming that we have something close to full employment, to get those workers, you will have to offer them higher wages than what they are receiving from their existing jobs. Simply put, we can reasonably expect supply curves to be upward sloping.

But sometimes, they are not. There are cases where the marginal cost, that is, the cost of satisfying one more customer, is lower than the cost of servicing the previous customer. In such a case, the marginal cost curve, and thus, the supply curve, will be downward sloping or flat over the relevant range of production.

This is called a “natural monopoly” because it is economically efficient for there to only be one supplier. The following diagram can help to illustrate just why. 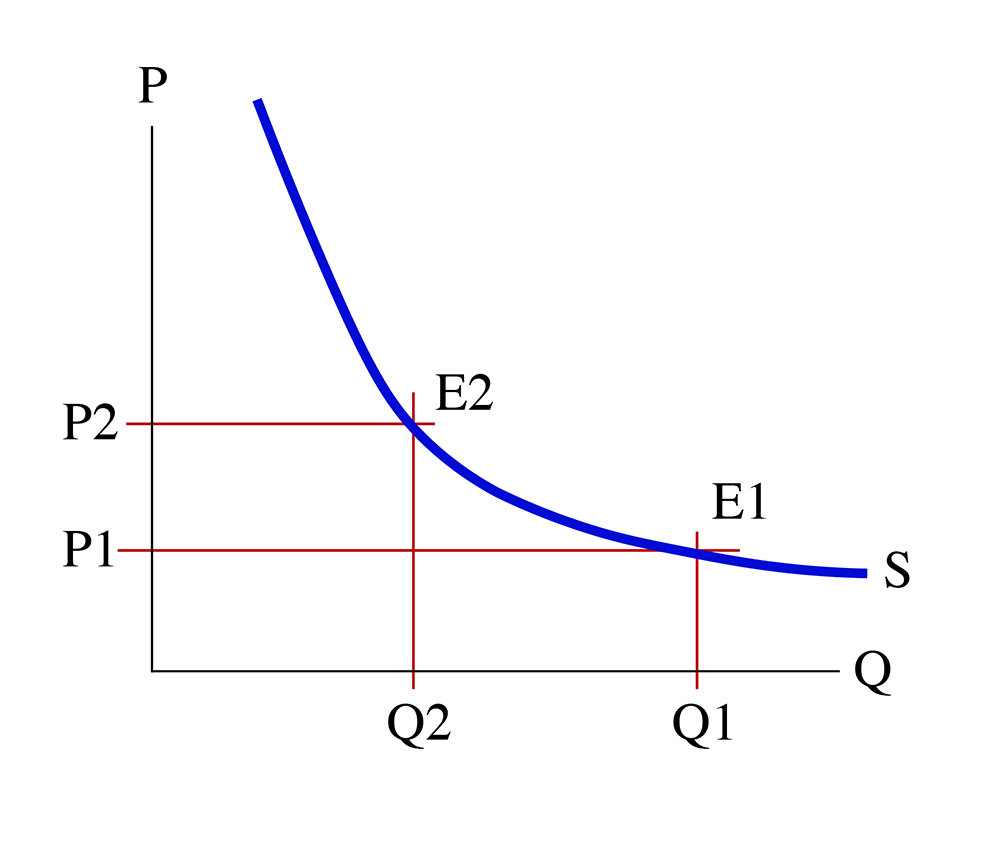 I should comment here that the textbook lumps natural monopoly in with other barriers to entry, and while it can potentially be thought of as a barrier, it is not one that is created by a market-power-seeking firm. Instead, it is a characteristic of a certain type of market - one with high capital costs and low marginal costs.

Given the downward sloping supply curve, and ignoring the demand curve for a minute, let’s say we have an equilibrium at point E1, which corresponds to quantity Q1, and gives us price P1. Let’s assume this is a monopoly equilibrium, where Q1 represents the entire size of the market – it represents everybody who wants to buy the good.

Now, let’s imagine that this was a duopoly market, where there are two suppliers. We can assume, for simplicity, that each seller in the market has exactly half of the market. This corresponds to the equilibrium E2 on the above diagram, which gives us quantity Q2 and price P2. We can assume the , and that each of the two firms supplies Q2 of the good in question.

Do you see the problem? If we have one firm only, the marginal cost of supply is P1, which is lower than the duopoly price, P2. This means that having two firms in a market ends up with the firms having to charge a higher price than if only one firm existed. In this case, it is efficient, or “natural,” for there to only be one firm in the market. This is why declining-marginal-cost industries are called natural monopolies.

What types of industries have this type of structure? Well, generally, industries that have very high capital costs, and comparatively low variable costs. This means that to be the first entrant, you have to spend a large amount on fixed costs, but the cost of servicing an extra customer is very low. Some typical industries would be the delivery of telephone services, or natural gas, or electricity, or cable television. These industries are typically referred to as “utilities,” and they require the development of large infrastructures to serve the customer base. For example, if you have a natural gas distributorship, you have to build a large network of distribution pipes and valves covering an entire city. This represents a pretty massive capital (or fixed) cost component, but the cost of servicing a new customer is very small compared to that.

Now, imagine that this was a competitive market. If there was to be competition between different natural gas suppliers, then there would have to be two sets of distribution pipes. Each firm would have to spend a lot of money, but then compete for the same size of customer base. Each firm would have to spend the same amount of money, but have half of the size of market to try to recover their costs from. Therefore, it makes sense for there to only be one firm in each city – it would be economically inefficient to have two competing natural gas distribution grids, just as it would be inefficient to have two redundant electricity grids, or two telephone grids, or sets of water distribution pipes, and so on.

The Problem of Natural Monopoly

Because natural monopolies tend to be utilities, which are services like gas, electricity, water, and telephones, which the public generally holds to be necessities of life, we are not comfortable allowing these firms to charge monopoly prices (i.e., the pricing where ). Because these are staples or necessities, the demand curve for these goods is very inelastic – it is very steep. This means that the monopolist price would be much higher than the free-market price, and a large volume of people would be denied basic necessities of life. Instead, we use the power of government to regulate prices in these markets.

The normal avenue for regulation of natural monopolies is the public utilities commission. These exist at the state-level in the United States, and at the national level in many other countries. Utilities commissions are given the task of making sure that utility companies make enough money to stay in business, but not enough to enjoy monopoly profits. They make sure that everybody is served, and served well, in theory. Since utilities are monopolies that are not subject to market forces and competition, they have little pressure to be responsive to market forces, which means that they do not have to treat their customers well, because their customers do not have the ability to switch to a different supplier.

In an ideal, perfectly competitive market, we expect price = MC. So, if we were the government power, we might want to regulate the utility to this point. Unfortunately, in a natural monopoly, this would lead to failure of the firm, because of the notion of declining marginal cost. If the firm was paid the marginal cost of the last unit sold for all units (that is, if the law of one price were to apply), then they would lose money on every unit sold, and, inevitably, fail. Another way to say this is that the marginal cost is always lower than the average cost, because the cost of the next unit is lower than all of the previous units made. For a firm to be able to survive in a natural monopoly, it must be able to charge at least the average cost.

Therefore, the goal of the utility commission is to make sure that a utility is able to charge no higher than average cost. However, most utilities are private companies (although some are owned by local governments in many parts of the world), and as private companies they strive to maximize profits. Typically, a private utility will file what is called a “rate case” to a utility commission, which is basically a statement of what the utility needs to earn in order to stay in business and ensure reliable service. It is the role of the utility commission to examine the rate case and see if it believes that the utility is exaggerating its costs. One of the problems of regulating a utility is that they usually are allowed to earn a certain percent accounting profit on their capital base. That is, the larger the capital base (the more buildings and pipes and power plants, and so on) that a utility owns, the more money it is able to earn. For this reason, utilities tend to be “over-capitalized”- they build more capital than would exist in a competitive market.

Another of the benefits of competition is that it drives innovation and efficiency: firms are always trying to come up with smarter and cheaper ways of doing things. While such actions lead to private gains in the near-term, they tend to be beneficial to society over time, as firms make profits and reinvest these into other productive uses. In a monopoly, these pressures also exist to some extent – if a firm can be smarter, it can make more money at the same market prices - but it is totally absent in a rate-regulated natural monopoly, since firms are allowed to earn a certain amount of money by the Public Utility Commission and any extra money they earn must be returned to the public. While such a result is good for the public, it is not for the utility, and therefore, the utility is unlikely to be particularly innovative or efficiency-driven.

The biggest issue in utility regulation today is the question of how to incentivize innovation in utilities, especially when public watchdog groups keep a close eye on what happens at utility commission meetings and protest loudly if they think the commission is allowing the firms to earn too much money, or include too much into the rate base. If a utility wants to spend any money on research and development, they must get approval from the commission, which will then allow the firm to recover the costs of that research. This means that electric or gas or water rates will be higher than they would be without the R&D spending, and members of the public complain if their rates go up. In many places, utility commissioners are elected by the general public, and they usually wish to be re-elected. This means that they want to keep the public happy, and they best do this by keeping rates low. So, we are stuck in a circle of bad incentives that leads to technical stagnation and a lack of innovation.

We will spend quite a bit of time talking about this when we look deeper at the issue of government failure in a few weeks.

The above statements about lack of innovation and competitive pressure do not mean that natural monopolies are immune to technological innovation that weakens their market power. Instead of having multiple firms compete to provide a single service, instead, we now have competing technologies attempting to provide the same service. The most obvious example is that of telephones. It used to be that the telephone system, or at least the part of it from the end user to the phone company’s switching and transmission points, was fully hard-wired. The local phone company had to build a network of cables connected to every house, usually at very high cost, a cost that could only be recovered by either charging monopoly prices or having regulated profits. It was a classic natural monopoly, and one that is government regulated or government-owned in many parts of the world. However, new technology was developed that allowed that last piece of wire between the customer and the phone company to be replaced by radio signals. Thus, we have the cellular phone, and competition with the land-line telephone. People no longer have to rely upon the old-fashioned phone company for their voice communications needs. The same is true of cable television and satellite TV, and now we can get Internet services delivered by the cable company or the phone company or the cell-phone company. Thus, the list of markets that can be classified as natural monopolies has shrunk in recent years. We have yet to find competitive alternatives for electricity, natural gas, and water, and markets for these products remain tightly regulated.