5.2 How Would You Regulate a Utility?

5.2 How Would You Regulate a Utility?

In this section, we'll take a closer look at the economics of "natural monopolies," or firms that operate under substantial scale economies. Insull's "ruinous competition" argument was basically that electric light was a natural monopoly and so could be more efficiently provided through a regulated monopoly than through the forces of competition. In economics, natural monopolies are the exception rather than the rule - in most industries the economies of scale disappear at some point and competition becomes the most efficient way to provide goods and services. In electricity, however, there are some good reasons, as we've discussed, that electric utilities were natural monopolies. We'll revisit this argument in the next lesson when we discuss electricity deregulation, but for now, we'll just take it as given that electricity is a good that features strong economies of scale and therefore could be more cheaply provided by a single large company. 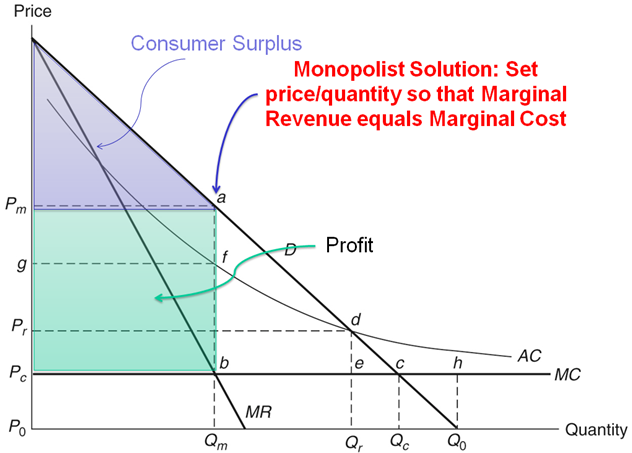 If the monopolist is allowed to maximize its profits without any regulation, then it will produce output until marginal revenue is equal to marginal cost. This is the point Qm on the horizontal axis. The corresponding price will be Pm, set by the intersection of Qm and the demand curve (point a in the figure). Monopoly profits are given by the shaded square defined by Pm, a, b and Pc. Consumer surplus is given by the shaded triangle defined by Pm, a, and the y-intercept of the demand curve. The area defined by the points a, b and c in the figure is called the "deadweight loss" and this represents the total value of goods or services that a competitive market would have provided but a monopolist will not.

Even though this particular market features lower average costs if it is monopolized, we don't like monopolies because they are bad for consumers. So we don't want this monopolist to act like a monopolist. What, then, do we do?

As the regulator, we know about the virtues of competitive markets, so we could try to regulate the price of the monopolist to mirror the competitive outcome, price equals marginal cost. This is shown in the figure below. We set price equal to marginal cost (Pc) and the monopolist produces a higher quantity (Qc). The market-clearing point is at point c in the figure. 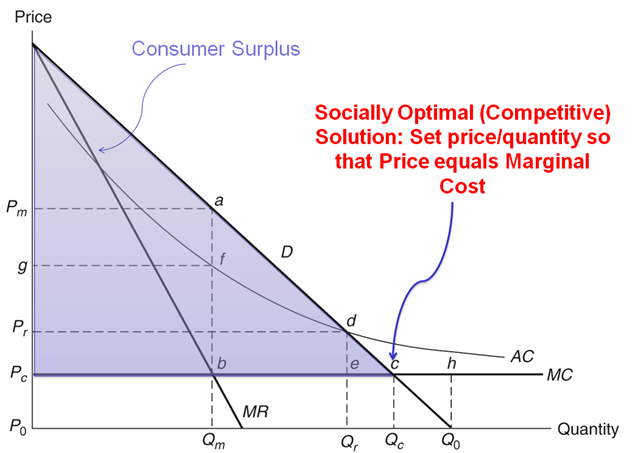 This situation is clearly better for consumers. Consumer surplus increases to the area of the shaded triangle defined by Pc, c and the y-intercept of the demand curve. Profits for the monopolist are zero. Not only does consumer surplus increase, but the deadweight loss disappears. For the regulator to set the monopolist's price equal to its marginal cost appears, in this case, to make society as a whole better off. The regulator will certainly be popular with consumers!

There's a problem here, however. Remember that the reason for such strong economies of scale in electric power is that so much of a utility's costs are fixed in the form of capital. The marginal cost of a power plant represents perhaps one-third of its overall total costs. The marginal cost of a power line is basically zero. So for an electric utility, if the regulator sets its price equal to marginal cost, then the utility will be unable to pay off its capital costs and will go bankrupt. Marginal cost pricing in the electricity sector sounds great in the short run, but in the long run, it means that firms cannot recover their capital investments. This is bad for both firms and for consumers.

The compromise that was reached through the regulatory compact promoted by Samuel Insull and his contemporaries was essential to set prices at the point where average cost and marginal cost are identical. In other words, prices are set to equal the average cost of providing electricity service, and the amount of electricity service desired is given by the point where the average and marginal costs intersect. This is shown in the figure below. The firm earns profits shown in the shaded area outlined by Pc, Pr, d, and e. These profits are, by definition of average cost, enough to cover both fixed and variable costs (i.e., the Levelized Cost of Energy as we had discussed in Lesson 4). Consumer surplus is shown in the shaded area outlined by Pr, d, and the y-intercept on the demand curve. 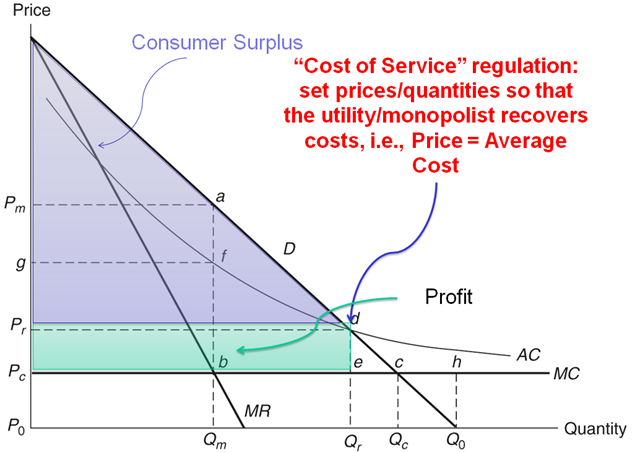 This is the economic rationale behind the kind of price regulation that became common with public utilities, including electric utilities. In the next section of the lesson, we'll look at the mechanics of how those prices are set by regulators and how they determine the profitability of the utility company.

‹ 5.1 The Regulatory Compact up 5.3 Rate of Return Regulation ›
EBF 483: Introduction to Electricity Markets