6.1 Problems with Rate of Return Regulation

6.1 Problems with Rate of Return Regulation

You should read this material first, and then the more detailed notes.

The figure below shows the price of electricity, in inflation-adjusted terms, from the late 1800s to the present. You'll note that for nearly eight decades the price of electricity fell almost every year. This was largely the result of big improvements in technology and also economies of scale as utilities could spread fixed costs over larger territories and more customers.

Beginning in the 1970s, however, the price of electricity began to rise. This was unprecedented and angered large industrial users of electricity who were beginning to feel a pinch from global competition. In the space of just over a decade through the mid-1980s, electricity prices rose more by around 50%. There were a lot of reasons for this. The rate of growth of electricity demand suddenly slowed in the 1970s because of a slumping U.S. economy and because of public policies that encouraged energy conservation. Declining demand, however, meant that the costs of the grid were spread over fewer kilowatt-hours sold and prices rose. Fuel costs also increased dramatically in the 1970s with the Arab oil embargoes. (In the 1970s fully 20% of electricity in the U.S. was generated with oil, while today virtually none is.) 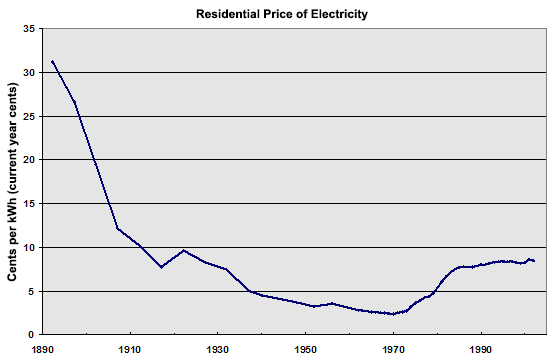 Electric utilities also proved themselves to be unable to build new types of power plants at a reasonable cost. Nuclear power was especially vulnerable to massive cost over-runs, and regulators in many cases allowed customers (rather than utility shareholders) to pay those inflated costs through higher rates.

In summary, there were basically three strikes against the rate of return model for electric utilities.

We'll now briefly discuss each of these problems in turn. Additional detail is provided in the Canvas reading.