There has been a large number of changes in the electric power sector over the past two decades. These changes have introduced a number of new types of players into the electricity industry and have reorganized how different types of companies and regulators function. In this last subsection in the lesson, we will meet these players, both new and old.

The figure below shows the three segments of the electricity supply chain - generation, transmission, and distribution. For nearly a century in the United States, there was one type of vertically integrated company performing all three of these functions. This company, called the "electric utility," generated its own electricity, moved that electricity over its own transmission lines within its geographic service area, and then delivered the power to its customers using its distribution lines. The electric utility usually had its prices, investments and business practices tightly regulated by individual states. The federal government in the United States did not have a dominant role in the electric utility business until the process of deregulation and reorganization began in the 1990s. 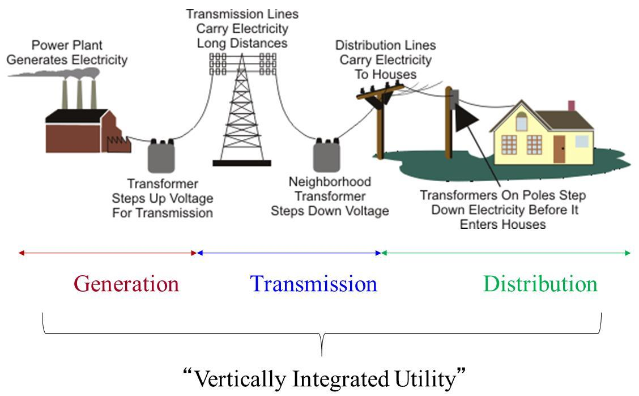 Prior to the process of electricity restructuring, the primary players in the electric power business in the United States were vertically integrated utilities and their state regulators.

Electricity reforms in the United States began in the 1990s. Not all states elected to reform their electric utilities. Most states in the northeastern U.S., along with California and Texas, chose to reform and restructure the electric utility business. Most states in the southern and western US did not choose to undertake electric utility reforms and still have vertically integrated utilities with tight state regulation. This is a marked difference between the United States and other countries. In much of the rest of the world that has undertaken electricity reforms (like Australia and the United Kingdom), those reforms have been implemented uniformly across the country.

The process of electricity reform has dramatically widened the number of types of companies and regulatory agencies involved in electricity supply. (There is some irony that we often call this process of reform "deregulation" even though it actually increased the amount of regulation on the power business.) Let's meet these new players, many of which we will encounter over and over again throughout the course. 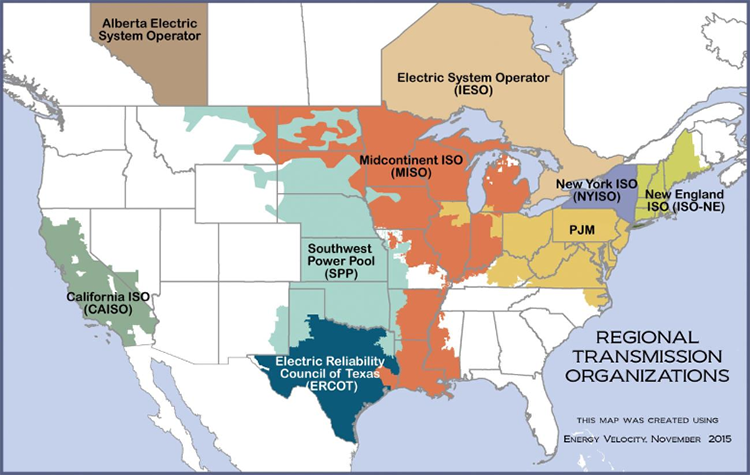 This map highlights different RTO’s in the US and Canada.

You may be able to appreciate by now how complex the supply chain in the electricity business has become. The figure below illustrates this complexity by comparing flows of power and other electricity services (blue arrows) and money (green arrows) before and after electricity reforms were put into place. The figure shows not only the complexity of transactions in the new electric power industry but also the central role of the Regional Transmission Organization. 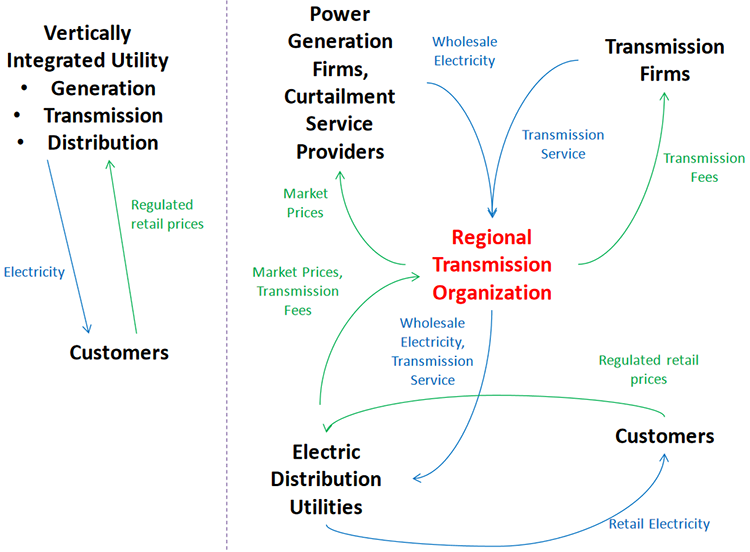 Figure 1.4: Flows of money (green arrows) and electricity services (blue arrows) in the electricity sector prior to reforms in the 1990s (left hand side) and after those reforms were put in place (right hand side).
Click Here for an accessible text description

Vertically Integrated Utility is Generation, transmission and distribution. Electricity goes to customers and money from the customers goes to the company.

Regional Transmission Organization has many parts. Electricity is transferred to RTOs from power generation firms, curtailment service providers and transmission firms. The RTO sends the electricity to electric distribution utilities which send electricity to the customer. The customer sends money to the electric distribution utilities which pays the RTOs which pays then pays the power generation firm and transmission firms.

‹ 1.2 Overview of the US Electric Power Grid up 1.4 Summary and Final Tasks ›
EBF 483: Introduction to Electricity Markets