1.1 War of the Currents: A Brief History of the Power Grid

1.1 War of the Currents: A Brief History of the Power Grid

Electric power in the United States is a $350 billion per year business and touches literally every corner of the economy. The "power grid" in North America is massive in scale and scope. By plugging a computer into a wall socket to read this lesson, you are connecting yourself to a stupendously complex network of hundreds of large power plants and many thousands of miles of transmission wires. The scope of the North American grid is shown in the figure below. 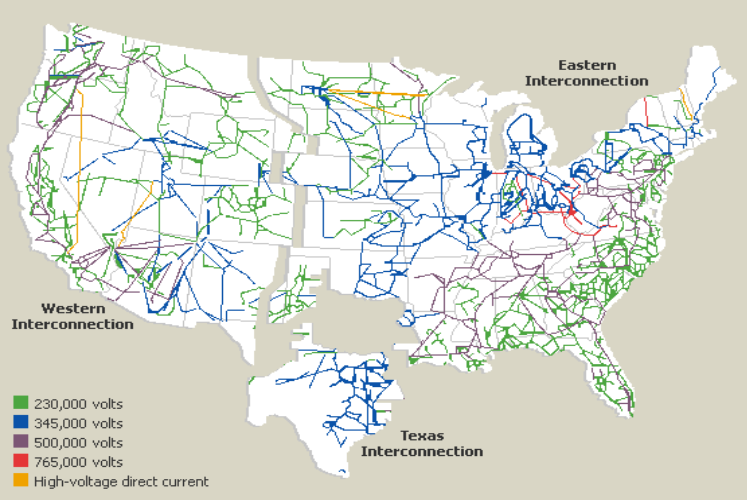 There are, broadly, two ways of generating electricity. One way, known as Direct Current or DC electricity, involves creating a voltage difference in two parts of a loop or "circuit," which causes electric current to flow. If you are adventurous you can create a simple DC circuit in your home using a potato.

Potato Battery
Click for a transcript for the video.
How to make a simple potato battery. Cut out a "penny sized" hole. Wrap copper wire around a penny. put the wire-wrapped penny into the potato. Stick a galvanized nail into the other end of the potato. Add another potato with a penny and nail. Wrap the wire from one potato around the nail in the other potato. Now, you can check the voltage with a multimeter. More potatoes yield more voltage.

Alternating current or AC electricity, which is how most of our power grid works, is radically different and much more complicated. The principle behind AC electricity is rooted in the linkages between electricity and magnetism, which you may have learned about in a high school physics class. In a power plant that produces AC electricity, a coil of wire is rotated at high speed inside of a magnetic field. This induces an electric field and the flow of electric current into a conductor called a transmission line. That electric field exerts a force on the things connected to the power grid (like houses and even other power plants), and the force bounces back and forth between the power plants and the end-use devices that consume electricity. So the current goes back and forth along the transmission lines in an AC power system, whereas in a DC power system the current goes only in one direction.

The video below has a somewhat more technical explanation of how AC power works.

AC Power
Click for a transcript for the video.
Hello everyone and welcome to this week's video. Today I'm going to be explaining alternating currents and how alternating currents are created. Now alternating currents are quite simply, you have a current flowing through wire and it changes directions or alters its direction. So the electrons are flowing one direction and then they flow the other direction and then they flow back the other direction and then they flow back the other direction. So it's a pretty simple concept but how is it generated. So this is kind of a simplified version of how that can be created. If you have not yet already watched my video on motors then you should check that out. I'll put a link in the description. Ok, so, basically we've got the same, it looks very similar to a motor except this one's going to create an alternating current rather than a direct current that has a constant flow of electrons in one direction. So this one is going to change the direction of those electrons. Ok, so, once again it's all based on that simple rule, if you have a magnetic force in one direction a current in another direction then you're gonna have a force in the other direction. So based on that left-hand rule. Ok, so, we've got our magnet here which is going to be, there's gonna be a magnetic field going from north to south. I know we've got this hand crank here, a pretty nice hand crank we've got going on to generate power. So we're going to hand crank this and that's going to rotate everything you see here. So all of this is going to rotate together and then this right here is just a simple voltmeter which is going to measure the voltage coming in. So these contact points are much like the brushes and these slip rings are much like commutators on a DC motor. So what happens is, as we rotate this, we're going to be applying a force on this side of the wire up as we rotate that clockwise, we're going to put a force up on this wire that's rotating around, so we've got the magnetic field going this direction, we've got our force going up. So what that does is it induces a current in this wire and so that current is going to flow in this direction. So it's going to flow to this slip ring, it's going to pass from the slip ring to the brush here, and then go into this voltmeter and since it's going from positive to negative the voltmeter is going to read a positive voltage. Okay, so that's one direction, now once we rotate it 90 degrees, it's going to have these two wires on top of each other, one going one direction, one going the other direction. So they're going to cancel each other out and there's not going to be any voltage read. Okay, so once we flip this all the way around, we've hand cranked it 180 degrees. Well then, you can see that this wire here would then be over here and so the magnetic field going across is going to push going this way. The force is going to stay in the same direction up. But now look at what's happening with our current. So our currents going to be traveling back through this wire. When this one's over here it's going to traveling back through it and it's going to go to the voltmeter here. So it's going to be going from negative to positive. So that's going to induce a negative voltage and this will read negative, and then once you turn that another 90 degrees, it'll be vertical again and it will cancel itself out and you'll have no voltage read. Okay and then you'll get back to start. So what I've drawn here is what the voltage change will look like as this is rotating. So at the start when this is perfectly perpendicular to that magnet here we are going to have the highest voltage reading and as it rotates the voltage will drop as it starts to come down past 90 degrees, the voltage will become negative. Once it hits 180 degrees, that will be the maximum negative voltage and then as that starts to turn back the voltage will become less negative, and then once we hit 270 degrees it will be zero, it'll be vertical again and then it will max out once more, once it's at a perpendicular to this magnet. So that's what the volt will look like. It's kind of a sinusoidal wave that we're going to have. And so here's just the steps that I was discussing. Now in actuality, this will probably be done with an induction generator so that you're not going to have these contact points. That's the whole kind of purpose of an AC motor and AC generation is that you don't have the contact like you do in DC. So I will have a video eventually on induction motors and that will kind of make more sense after that video. So if you have any questions or comments feel free to leave them below.

The reason that we have an AC power system is one of the most interesting stories in the history of energy. Please read the following web articles (and have a look at the videos associated with the articles):

As you read the articles, think about the following questions:

‹ 1.0 Introduction up 1.2 Overview of the US Electric Power Grid ›
EBF 483: Introduction to Electricity Markets