Now that you've seen the basic idea of LMP calculations, we'll move on to the three node network. This will be more complicated because we'll need to use our power flow adjustment calculations as we did in a previous lesson. We will go through a couple of different versions - one with constant marginal costs and one with linear marginal costs. 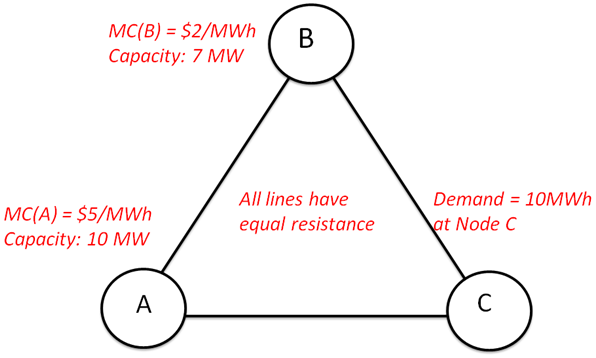 First, we will clear the market and calculate flows without imposing any limits on the transmission lines. The market-clearing solution is for Generator B to produce 7 MWh and Generator A to produce 3 MWh. The SMP is $5/MWh. Flows in the network are calculated as:

Since there is no transmission congestion in the network, we have that the LMPs are all identical and equal to $5/MWh.

Now we will impose congestion on the system by assuming that the maximum possible flow on Line (B,C) is 5 2/3 MW (which was our flow solution above). We will also assume that demand increases to 11 MWh, so we need to redispatch the generators to avoid overloading Line (B,C). We calculate the redispatch as follows, using the same technique as in Lesson 4:

The LMPs at the generator nodes (A and B) are equal to the generator marginal costs. The LMP at Node C reflects the costs of the actions needed to deliver an additional MWh to Node C (increasing generator A by 2 MWh, which imposes a cost of $5/MWh; and reducing output at generator B by 1 MWh, which saves $2/MWh).