10.1 Risk in Electricity Markets: Temporal, Locational and the Spark Spread

10.1 Risk in Electricity Markets: Temporal, Locational and the Spark Spread

Have a look at one or more of the following animated maps of Locational Marginal Prices in US RTOs:

It won't take you too long to realize that LMPs are highly volatile. They are calculated at thousands of different locations and change almost constantly. You may also notice that the difference between LMPs at various locations is also volatile. Sometimes the price at one node is higher than at another node, and sometimes it is lower.

We generally define two dimensions of risk in electricity markets:

These two types of risk may need to be managed through various hedging instruments (which we'll get to very soon) but they also may represent arbitrage opportunities. Two of the most common ways of exercising arbitrage in electricity markets are through "virtual bidding" (arbitraging the difference between the clearing price in the day-ahead and real-time electricity market) and through the "spark spread" (the difference between fuel and electricity prices).

Virtual bidding offers a mechanism for electricity market participants to take advantage of differences between day-ahead and real-time prices at a specific location. It involves buying or selling some quantity of electricity in the day-ahead market and then taking an offsetting position in the real-time market. Large financial institutions like investment banks and hedge funds engage in a lot of virtual bidding, but other types of market participants like generating companies and electric utilities also engage in virtual bidding.

The second mechanism for exercising arbitrage is through the "spark spread," which is the difference between the electricity price and the cost of fuel to generate electricity. The arbitrage opportunity that the spark spread represents is typically the opportunity to buy fuel and sell electricity. Sparks spreads in financial markets are typically defined as the difference between the LMP and a natural gas generator with certain characteristics (like a heat rate of 10,000 and variable O&M costs of $2.50 per MWh). 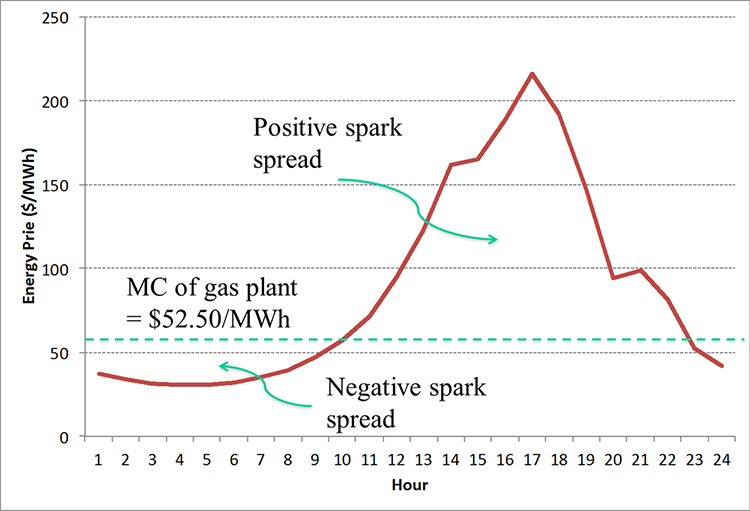 Figure 10.1: The spark spread is positive when the electricity price exceeds the cost of fuel for a representative power plant, and is negative when the cost of fuel exceeds the electricity price.
Source: This image by S. Blumsack © Penn State University is licensed under CC BY-NC-SA 4.0
‹ 10.0 Introduction up 10.2 Financial Transmission Rights and Contracts for Differences ›
EBF 483: Introduction to Electricity Markets