By now, you have heard (or read) dozens of times that electricity supply and demand must balance in real-time, every second of every day. The reason for this is that electricity cannot be stored in large batteries at a reasonable cost. While Tesla may be looking to change this with large-scale battery production, the simple fact at the present time is that while battery energy storage is really cool, it’s not economically viable. This is not to say that there is no such thing as energy storage in the power grid. There is some, it just doesn’t come in the form of batteries. Here are a couple of examples.

In RTO electricity markets, demand response can compete against power plants to balance supply and demand. Often times demand response is cheaper than running a peaking power plant (and often pollutes less as well). Here’s a simple example of how demand response works. Suppose that there are only two power plants in the electricity market. Plant A has 100 MW of capacity and a marginal cost of $5/MWh. Plant B is a peaking plant with a capacity of 10 MW and a marginal cost of $50/MWh. If demand is 101 MWh during some hour, then Plant A will be dispatched fully and plant B will be dispatched at 1 MWh. The system marginal price will be $50/MWh. Demand response solves this problem by reducing demand rather than increasing supply. Suppose that there was a large commercial building that was willing to turn off the air conditioners during this particular hour, reducing overall system electricity demand by 2 MW. The building owner asks to get paid $20 per MWh of electricity reduced. In order to balance supply and demand, the RTO would save money by dispatching the demand response rather than the peaking Plant B. The RTO would order the building owner to reduce demand, so the final level of demand would be 99 MWh and the system marginal price would be $20/MWh. 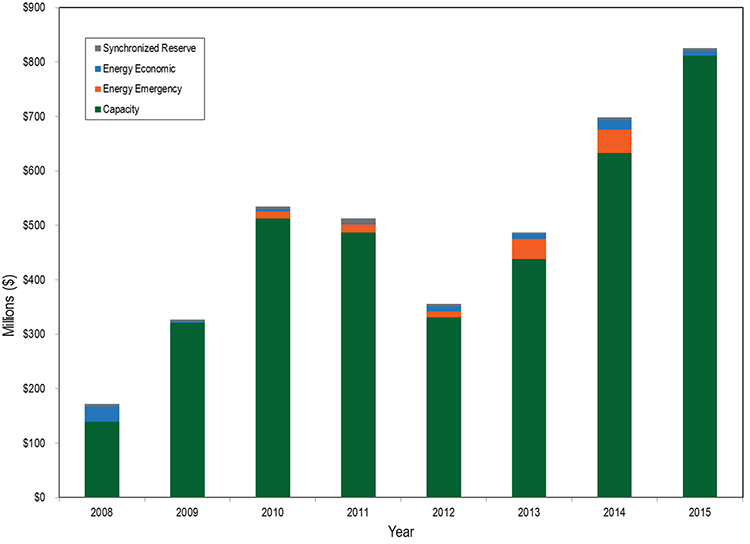