12.3 The Curious Case of the Negative Prices

12.3 The Curious Case of the Negative Prices

As we discussed in Lesson 9 when we covered ancillary services, the integration of large amounts of wind and solar power is a big challenge for RTOs and electric utilities, since they must keep the power grid stable (balancing supply and demand) even as highly variable power sources like wind and solar connect themselves to the grid. Read the following article Intermittent Nature of Green Power Is Challenge for Utilities, about wind farms in Vermont to get a sense of how the goals of wind and solar producers to generate as much electricity as possible and the goals of the RTO are not always well aligned.

Large-scale wind and solar also pose challenges for electricity markets. Because wind and solar have basically zero marginal cost (remember that once the plants are built, fuel from the wind and sun are free at the margin), enough wind and solar power can drive down prices in the day-ahead and real-time energy markets. The frequency of LMPs that are at zero or even at negative levels has been increasing in markets with high levels of market participation by wind and solar energy producers. The figure below shows the frequency of negative prices in the California ISO during different hours of the day over the past few years (remember that a negative price means that a power plant is paying to produce electricity, and consumers are paid to use electricity). Note that during the daytime (hours 8 through 18 in the figure, which is 8:00 am to 6:00 pm) the price in the California market was negative more than 10 percent of the time in 2016, compared to a few percent of the time in 2012 and 2014. 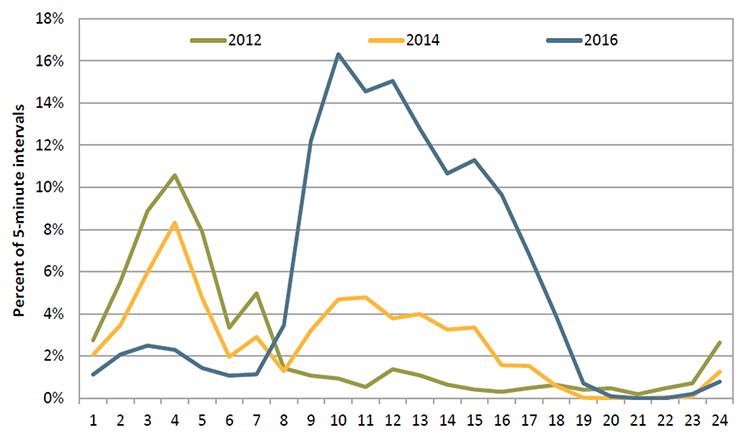 Figure12.2: Duration of negative prices in the California ISO electricity market. Source: California ISO
Click here for a text description of the Figure

In 2016, roughly 1-2% of intervals were negative in the early morning spiking to 16% negative at 10 am and then decreasing slowly to 2% negative at 7 pm. Then falling below 1% negative until midnight.

Remember that negative prices in electricity markets can arise for two different reasons. The first is operational inflexibility, as a signal that supply is greater than demand. Suppose that a base-load gas plant with a very slow ramp rate was running at full capacity to meet electricity demand. At some point, wind energy production increases rapidly, so that there is more supply on the grid than there is demand to absorb that supply. The grid operator has two options – production from the wind can be curtailed (which has happened, as discussed in the Vermont article) or production from the base-load power plant could be curtailed, which comes at the risk of damaging the power plant. If the grid operator chooses neither action, then the price becomes negative. In this case, while a negative price seems strange, there are perfectly good economic reasons for the price to become negative.

The second reason that negative prices arise is because of subsidies to wind and solar technologies. Many wind power plants, for example, receive a subsidy known as a Production Tax Credit for every MWh that they produce. This subsidy, currently equal to $23 per MWh, gives wind projects an economic incentive to produce as much electricity as possible. It is even possible that a wind project would accept a negative price in order to get the $23 subsidy for each MWh generated. If the plant gets paid $23/MWh and the price is -$5/MWh, the net revenue for the plant is still $18/MWh. Thus, some renewable energy market participants submit supply offers into the day-ahead or real-time market at negative prices, all but ensuring that their offers will be the cheapest.

RTOs whose territories cover areas with a lot of wind and solar production (most notably the California ISO, the Midcontinent ISO, and ERCOT in Texas) have had to adjust their market protocols to handle large quantities of wind and solar power.

The Midcontinent ISO (MISO) began a program called Dispatchable Intermittent Resources (DIR) to avoid having to manually shut down large quantities of wind energy. The DIR program allows wind energy resources to participate like every other generator in the MISO real-time energy market as long as a binding production forecast is provided to MISO. You can read more about the DIR program here: Renewables Curtailment: What We Can Learn From Grid Operations in California and the Midwest.

The California ISO faced a very different problem, as their footprint has seen more rapid growth in solar energy than in wind energy. High levels of solar PV (without accompanying energy storage) pose a peculiar problem for grid operators in that it inverts the traditional daily demand pattern. Grid operators are used to seeing high demand for electricity in the middle of the day and lower demand at night, with the shift between high demand periods and low demand periods being rather gradual. With high levels of solar PV (which produce a lot of electricity during the day), the needs of the grid flip – fewer other power plants are needed during the day and more are needed at night. Moreover, the shift between the daytime and night-time load pattern becomes very sudden. 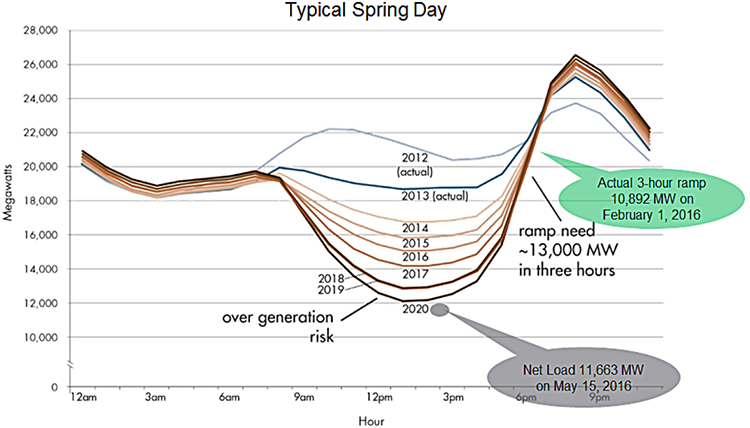 Figure 12.3: The California Duck Curve.
Click here for a text description of the Figure
This a graph showing energy demands (y-axis) over the hours in a spring day (x-axis) over the past 8 years.

This is captured in a graphic known as the “duck curve,” shown above. The duck curve shows the demand for electricity (net of solar PV production) on California’s grid during each hour of the day as more solar PV comes on-line. Not only is the electricity demand in the middle of the day (again, net of solar production) pushed very very low, but the increase in electricity demand between 6 pm and 8 pm is rapid and very large in magnitude. The three-hour increase in demand of 10 GW shown in the figure above is roughly like powering up the entire state of Wisconsin in three hours.

California’s needs in integrating solar power into its markets are thus different from MISO’s needs. MISO needed a way to reduce the frequency with which it had to manually turn off wind energy production. California needed a way to pay for power plants with short start times and very high ramp rates, to handle the afternoon increase in non-solar electricity demand. California’s response was to develop a kind of real-time market that clears every five minutes, not every hour. This market, known as the Energy Imbalance Market was designed primarily to attract fast-ramping power plants, energy storage installations, or any other resource that could respond quickly enough to the five-minute market signal. As of 2021, EIM has attracted more utilities and expanded to many western states. The latest information for this market can be found at its website.

‹ 12.2 What Is the Price of a Negawatt? up 12.4 Will Rooftop Solar Kill the Utility? ›
EBF 483: Introduction to Electricity Markets