9.2.1 The Rationale for Capacity Payments

9.2.1 The Rationale for Capacity Payments

Like many interventions in market systems, the rationale for capacity markets in electric power arises from some attempts to correct for perceived market failures. These interventions create distortions in the electricity market, and capacity payments have been the favored mechanism to correct for these distortions. In the case of electric power generation, there are three important such distortions or market failures:

To see how these three distortions can cause problems in electricity markets, we'll use a simple example. Let's say that PJM needs a new power plant built for the system to meet its installed capacity margin requirement. The price cap in the market is $1,000 per MWh. The cost of the power plant is $400,000 per MW of capacity, and its marginal cost of producing electricity is $240 per MWh. The plant would run 1% of the time during the year (a capacity factor of 0.01) and the relevant discount rate is 15% for a 15-year time horizon.

All PJM needs is for someone to build this plant, run it during peak hours when LMPs are very high, and make enough profit doing so. There's a problem, however. If you calculate the LCOE for this power plant, you should find that the cost for the power plant to break even is around $1,021 per MWh.

The figure below plots the LCOE of the power plant as a function of the capacity factor, with the $1,000 price cap shown in the figure. Because the plant needs to charge more for its electricity than is allowable under the price cap, no sane investor would build this plant. Moreover, during those peak demand periods, consumers might pay a retail rate of $100 per MWh for electricity that costs $1,000 per MWh to produce. With other goods, we might expect demand to go down during times that prices go up (think about the demand for Uber rides during surge pricing, for example). But this doesn't happen in electricity because retail prices do not always reflect marginal costs very well. 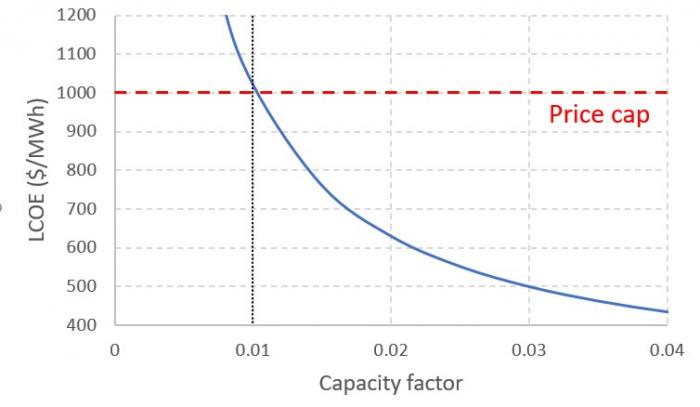 LCOE vs. capacity factor of an example power plant
credit: This image by Z. He © Penn State University is licensed under CC BY-NC-SA 4.0 Z.

PJM's problem is that it needs this plant to be built in order to have enough of an installed capacity margin. But no one has any financial incentive to build the plant. Remember, PJM can't own any generation assets and so can't build the power plant itself.

This has become known in the electricity business as the "missing money" problem. It has been exacerbated recently by very cheap natural gas and a large contribution to the grid from renewable power generation in places like Texas and California. These states have seen sustained periods of day-ahead and real-time energy market prices at $0 per MWh or even negative prices. The capacity market is one solution to the missing money problem -- one that has been adopted in every US Regional Transmission Organization except the ERCOT system in Texas.

‹ 9.2 Capacity Markets up 9.2.2 The Structure of Capacity Auctions ›
EBF 483: Introduction to Electricity Markets