The Lecture for The Prize Chapter 8: The Fateful Plunge

The Prize Chapter 8: The Fateful Plunge

Admiral John Fisher helped modernize the Royal Navy. He saw Germany as a major threat primarily because it was a major industrial powerhouse as well as a growing military power. His first test of the use of fuel oil in a Royal Navy ship, the HMS Hannibal in 1903 turned out to be disastrous and dealt a bitter defeat to Fisher and Samuel's vision to convert naval ships from coal to oil. A faulty burner caused the entire ship to be engulfed in a black smoke on suddenly switching from coal to oil. Just after the disappointment, Fisher met D'Arcy while at a spa in Marienbad, Bohemia; and D'Arcy saw the potential market (Royal Navy) for his Persian oil. In 1904, John Fisher, as the First Sea Lord of the Royal Navy, proclaimed "Wake up England!" in an effort to draw attention to responding to the German naval challenge by modernizing the Royal Navy through converting its fleet from coal to oil. The use of oil provided several advantages: ships could be at sea longer, move more quickly than a coal-powered ship, required fewer personnel to operate the ship, and had better maneuverability.

The "Guns vs. Butter" debate

The naval race between Britain and Germany occurred against a backdrop of social and labor unrest, domestic conflicts of financial and budgetary constraints, and the "guns (navalists) vs. butter (economists)" bitter debate. The navalists supported "big Navy" policy and expanded expenditure while the economists favored more money for social and welfare programs and maintaining the peace.

Initially, Winston Churchill did not see Germany as a threat and supported the economists' viewpoint and rather favored an Anglo-German naval agreement. However, he changed his mind instantaneously when in July 1911 the German gunboat, the Panther, sailed into the Moroccan port of Agadir. He saw German expansionism thereafter and concluded Germany meant to make war. On becoming First Lord, Churchill invited Fisher, who had retired, to become his unofficial adviser. The two men had met earlier through the Navy and become good friends. Fisher pushed Churchill to convert the fleet to oil power and pointed out that oil was more efficient and cheaper. 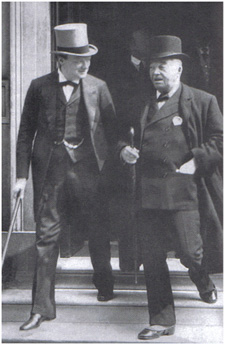 Lord Fisher and Winston Churchill, First Lord of the Admiralty, after a meeting of the Committee of Imperial Defence, 1913
Credit: Photo Source

The conversion from coal to oil by the Royal Navy

Fisher arranged for Marcus Samuel and Churchill to meet to make a case for oil. Churchill did not find Samuel very convincing and decided to conduct a study to determine the advantages of a naval fleet powered via oil versus coal including pricing, availability and security of supply. The study clearly demonstrated that oil allowed faster ships, greater rapidity in getting up to speed and allowed advantages in operation and manning of the fleet, provided greater radius of action and could be refilled at sea. Oil also greatly reduced the stress, time, exhaustion, manpower, and discomfort that went with coaling. Thus, bottom-line, oil provided more gun-power and speed for less size and cost.

Eventually, the three naval conversion programs of 1912, 1913, and 1914 created a great addition of power and cost with five oil-powered battleships and other vessels. There was now a major issue of finding oil, obtaining enough of it, and securing the supply (politically and militarily). The major questions concerning oil, once the decision to convert from coal to oil was made, were: where was the oil to be obtained from, and could enough supply be secured (militarily and politically)? In Churchill's opinion, Britain needed to be the master of the high seas to keep it alive and that "Mastery itself was the prize of the venture."

The entire British naval fleet was eventually converted to oil. This process turned out to be expensive but vital to British naval dominance. Also, Britain needed to decide which company would supply the oil and thereby reap the profits: Royal Dutch/Shell Group or Anglo-Persian Oil Co? Charles Greenway was truly the man behind the scenes for Anglo-Persian's operations. To win the Admiralty over in giving Anglo-Persian the contract, he engaged in the "Shell Menace" and stressed Samuel's "Jewishness" and Deterding's "Dutchness". His ploy to make Shell appear unreliable was argued in the British House of Commons by Winston Churchill, the civilian head of the Royal Navy and Member of Parliament, and was well received by the British parliament.

British Government as 51% Owner of Anglo-Persian, a private company

Events leading to World War I

Eleven days after Churchill's bill, on June 28th, 1914, Archduke Franz Ferdinand of Austria was assassinated at Sarajevo. Russia mobilized its forces on July 30th and on August 1st, 1914, Germany declared war on Russia. Churchill flashed the order to the entire British fleet to "Commence hostilities against Germany" starting the 1st World War!