The Rise of Nationalism and Military Expansionism in Japan

Based on military victories over China in 1895 and Russia in 1905, Japan had gained rights to Manchuria, and in the late 1920s, there was a push in Japan to gain complete control of the area which some described as “Japan’s lifeline” from the raw material supply, accommodation, and security viewpoints. Through the early 1920s, Japan had a functioning parliamentary system. However, in the early 1930s, Japan’s military came to dominate the government, and Japan embarked on a course of imperial expansion in East Asia. On September 18, 1931, for example, Japan provoked China with a bomb attack that caused minimum damage to the South Manchurian Railway, and turned around and blamed it on China. They then proceeded to attack China without delay for it. They wished to block other Western powers from the area that they called Japan’s “Greater East Asia Co-Prosperity Sphere.” Several reasons accounted for this shift in military expansionism: vulnerability due to its lack of natural resources, economic hardship from the Great Depression and the collapse of world trade, dwindling access to international markets, extreme nationalism, moral distress, arrogance, and the mystical belief in the superiority of Japanese culture as well as “The Imperial Way” (Asia under Japanese control).

When Prime Minister Osachi Hamaguchi won a large election victory in February 1930 and favored cooperation with Britain and the United States, he was assassinated by a youth, and that killed any spirit of cooperation. Ultra-nationalism took hold thereafter. Japan organized a new puppet state in Manchuria – Manchukuo (“Japan’s lifeline”) and installed deposed Chinese emperor, Pu Yi, as its figurehead. After being reprimanded for its actions by the League of Nations (United Nations), Japan left the League, rejected liberalism, capitalism, and democracy as engines of weakness, and embarked on its own destructive course. They believed that there was nothing more noble than to die in battle for the Emperor and sought to establish a “national defense state” in which all resources, especially oil, were targeted for war based on Germany's failure/defeat in WWI from lack of resources (oil). The Army focused on Manchuria, North China, Inner Mongolia, and the Soviet Union, while the Navy focused on the Dutch East Indies, Malaya, Indochina, and islands in the Pacific for access to natural resources.

By the late 1930s, Japan produced only 7% of the oil it consumed. It imported the rest, with 80% coming from the U.S., and 10% from the Dutch East Indies. After the Manchurian Affair, Japan sought to dominate the oil industry to serve its needs. Up to that time, 60% of its internal market was held by two Western companies (Rising Sun & Stanvac). Rising Sun was the Japanese affiliate of Royal Dutch/Shell, and Stanvac was a joint venture between Standard Oil of New Jersey and Standard Oil of New York.

With Japan’s actions, the United States emerged as Japan’s antagonist in the Pacific, as the US had an “open door” policy which was counter to Japan’s strategy. With the US as Japan’s major oil supplier and likely antagonist, the question was where was Japan going to get its oil in case of war? To help address this, the military won passage in 1934 of the Petroleum Industry Law which gave the government the power to control imports, set quotas, fix prices, and make compulsory purchases. The underlining objectives of the law were to build up refining industry, reduce the role of foreign companies, and prepare for war. The oil companies, US, and Britain all recognized and disapproved of the “squeeze and restrictive oil” policies of Japan, but could not agree on an embargo or what to do in response.

Following the Sept 18, 1931 South Manchurian Railway attack and several other obscure clashes, on August 14, 1937, Japan went to war with China after China bombed the Japanese naval station in Shanghai. Japan didn’t want any disruption of its oil supply and passed the Synthetic Oil Industry Law which provided a 7-year plan to produce synthetic fuels from coal by 1943. During the Sino-Japanese war, official American policy and public opinion supported China as the victim of aggression. Franklin D. Roosevelt (FDR) supported a “quarantine” (economic sanctions without declaring war) against Japan, and the American public was opposed to continued export of military material to Japan. Washington was also surprised by the growing ties between Japan and Nazi Germany. Japan’s deadly paradox clearly involved its strong reliance on US oil while at the same time embarking on a path of potential war with the US! When, in May 1939, Japanese aggression in China increased and it bombed Chinese civilian centers, it shocked and aroused the American public, as a Gallup poll indicated 72% of public support for an embargo on the export of war materials to Japan. Stanvac in the East Indies in September 1938 was convinced war was inevitable in Europe (with Germany) and Asia (with Japan) and began to plan for a Japanese invasion of the Dutch East Indies. They prepared for both an embargo on Japan and the invasion by Japan, and by early 1940 had evacuation plans in place. 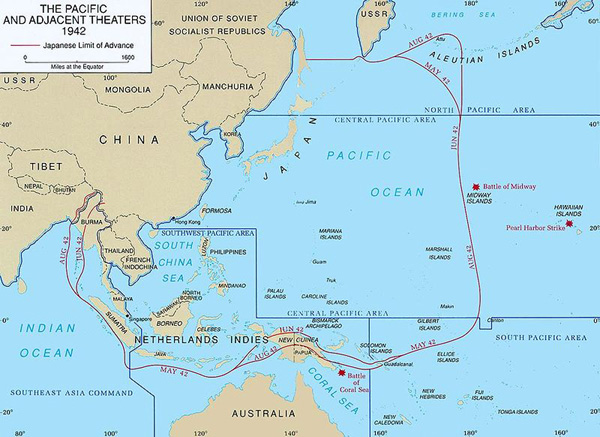 Map of The Pacific and Adjacent Theaters 1942.
Credit: Public Domain

The Slide to War

Japan began to establish industrial self-sufficiency and to break its dependence on the US in anticipation of an oil embargo. It also began a propaganda campaign of its citizens on how the ABCD powers (America, Britain, China,and Dutch) were conspiring to deny resources to and strangle the Japanese empire. America, fearing British withdrawal from East Indies, transferred its fleet from its base in Southern California to Pearl Harbor on the island of Oahu in Hawaii. The move was both to stiffen British resolve and also serve as a deterrent to Tokyo. The National Defense Act which gave the president power to control exports was passed and signed by FDR on July 2, 1940 after the Nazi invasion of Western Europe. The Japanese cabinet was reconstructed under the new Prime Minister, Prince Konoye, who appointed the militant general, Hideki Tojo, “the Razor,” as War Minister. It was clear that Japanese leaders who were in favor of cooperation and avoiding collision with Western powers had lost ground.

Japan strengthened its commitment to go into Southeast Asia and sought to import far larger amounts of gasoline from the U.S. in July 1940 which set off an alarm in Washington. FDR authorized building a 2-ocean Navy - one in the Atlantic to confront German aggression and the other in the Pacific to deal with the Japanese. On September 26, 1940, the US banned export of iron and steel but not oil to Japan in response to Japan’s moves in Indochina (Vietnam). Japan formally signed the Tripartite Pact with Hitler and Mussolini the next day, September 27, 1940. Still, FDR remained committed to a “Europe first” strategy that provided protection to Europe/Britain first with all the resources (oil). Besides, FDR was also running for an unprecedented 3rd term election in about a month and wanted to avoid any risk that could derail his chances.

Quiet diplomatic talks began between Secretary of State Cordell Hull and the Japanese ambassador, Admiral Kichisaburo Nomura to avoid the escalating conflict. Unknown to the Japanese, the U.S. and Britain had broken the Japanese top-secret code, “Purple”, through operation “Magic” and were already aware of the Japanese position each time the Secretary and Ambassador met. The Germans informed Japan in May 1941 that the Americans had broken their codes, but the information was discounted as the Japanese thought Americans were not capable of doing so. Even with “Magic,” the US had no clue of the intentions and concerns Japan had on the US fleet in Hawaii. Japan realized that if left undestroyed, the US could readily launch a counterattack to any planned invasion of the East Indies and Singapore. 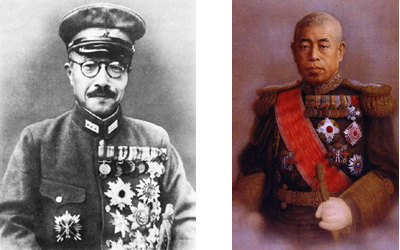 The Commander in Chief of Japan’s Combined Fleets, Admiral Yamamoto, devised the plan for attacking Pearl Harbor. He continued to challenge the notion of war with the U.S. even while devising his plan. Yet, he was a fervent nationalist to his core and devoted to the Emperor and his country even though he was educated in the US at Harvard. The code for his surprise attack on Pearl Harbor was “Operation Hawaii” and the key elements were secrecy, intelligence, superb coordination, high technical skills, technological innovations, aerial torpedoes, refueling at sea, devotion to the cause, and good weather. His objective was a quick knock out of the US to affect the fate of the war and also destroy the morale of the American public. In early 1941, there were rumors in the diplomatic circles about Japan attacking Pearl Harbor, but that was discounted by the US that such an “audacious assault” was not possible.

On July 24, 1941, a radio reported Japanese warships were off Camranh Bay headed to Indochina. With Japan in South East Asia and Nazi Germany's surprise sweep into Russia in June 1941, US faced both Europe and Asia dominated by Axis with the US the last island left between two unsafe seas! With the increased escalation and tension, an embargo was virtually the only way left and on July 25, 1941, the U.S. ordered all Japanese financial assets in the U.S. frozen. While it was not an embargo, lack of assets to buy oil virtually turned it indirectly into an embargo. On July 28, Japan, as expected, invaded Indochina taking another step towards war. Effectively, by August 1, 1941, there were no more oil exports to Japan from the U.S. Japan’s oil situation was so serious that there were some last minute diplomatic efforts to avoid the confrontation in addition to intense discussions between the Emperor and his top military generals.

On October 2, US rejected a meeting between Prime Minister Konoye and President Roosevelt. Unable to find another alternative to war, Konoye was shortly after replaced by Hideki Tojo, the war minister, as Prime Minister on October 18. Tojo dismissed diplomacy as useless and opposed any compromise with the U.S., and on Nov 26, Japanese naval task forces secretly set sail for Hawaii under radio silence. There was intelligence report indicating a large Japanese expeditionary force was moving from Shanghai toward Southeast Asia. Leading up to the meeting, Japan and the US had been negotiating intensely for an entire truce/withdrawal. Following all the quiet conversations, President Franklin D. Roosevelt finally concluded that Japan could not be trusted, and Secretary of State Hull gave up on further negotiations with Japan.

The special and secret Japanese task force crossed the international dateline on December 1, still undetected, and moving towards Hawaii. At about 7:55 AM on Dec 7, 1941, bombs began to fall on American fleet in Pearl Harbor. The attack was completely unexpected as everyone had expected it to be in Southeast Asia. Two waves of Japanese aircraft destroyed 8 battleships, 3 cruisers, 4 destroyers, and 4 auxiliary craft and killed 2,335 American servicemen and 68 civilians. The American aircraft carriers survived only because they were out on a mission at sea. Japan lost only 29 planes as Admiral Yamamoto’s gamble had paid off.

Japan, however, made one grave mistake – not sending a third wave to attack the oil supplies and repair facilities on the island of Oahu. All oil on the island had been transported from the mainland. Thus, a destruction of the oil reserves and tanks holding them at Oahu would have immobilized every ship of the US Pacific Fleet not just those destroyed, accomplishing exactly what the Japanese original intention had been. The sparing of the aircraft carriers, the oil, and repair facilities ended up being the only good fortune of the US on that day. “Oil had been central to Japan’s decision to go to war. Yet the Japanese forgot about oil when it came to planning Operation Hawaii.” Admiral Chester Nimitz indicated later that if Japan had destroyed the oil, the war would have been prolonged at least another two years.

In a way, each side underestimated the other. Americans could not believe Japan would be so daring and reckless (and we were wrong). Likewise the Japanese counted on Pearl Harbor to shatter American morale (and that was a much greater error in judgment, as we will later see). 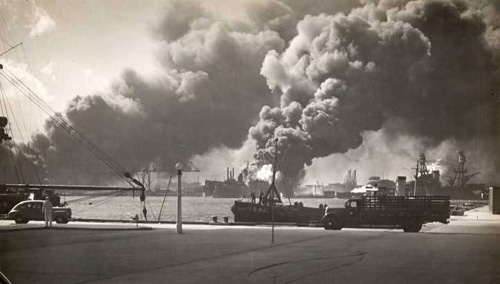