Right after Pearl Harbor, the families of oilmen in Balikpapan, in Borneo, in the British East Indies were evacuated in anticipation of Japanese advances into Southeast Asia. Balikpapan, with all its oil wells and refineries, was one of the great prizes for which Japan would go to war. In mid-January 1942, crews began to destroy the wells as the Japanese were closing in. They pulled out the tubing, cut them up, jammed them down the wells, and placed cans of the explosive trinitrotoluene (TNT) in each well to destroy them. The crews started with the least productive wells until at last all were destroyed. The refinery complex was also completely destroyed, and with that action, four decades of oil industry that had been created was destroyed in less than a day. The next plan was for the crew to escape. Some crew was evacuated, but 75 people were left stranded at the Bay of Balikpapan still awaiting rescue as the Japanese had already landed on the south side of the bay. Out of the 75, only 35 survived the jungle and the Japanese firing squads and prisons.

It should be pointed out, however, that the initial attempt to deny Japan the oil in the East Indies was only an initial setback. Within a short period, Japan was able to restore the Balikpapan oilfields with astonishing results that far exceeded their goals. Oil production in the Southern zone in 1940 was 65.1 million barrels. In 1942, the Japanese managed to restore 25.9 million barrels, and in 1943, 49.6 million barrels (75% of the 1940 level). With the East Indies oil, Japan was able to import enough oil to make up for the oil embargo in July 1941 by the Americans, British, and Dutch. There was no lack of oil, and the Japanese fleet could even refuel locally at will. They even struck a giant field in central Sumatra in the Minas structure. All these events helped make Japan feel that the oil problem, which was the driving force for its aggression, had been solved.

By mid-March 1942, Japan’s control of the East Indies was complete, and in just three months, Japan had won all of the rich resources of Southeast Asia. With the stunning and rapid military successes in Hong Kong, Manila, Singapore, and Southeast Asia and the Pacific, a “Victory fever” gripped Japan. 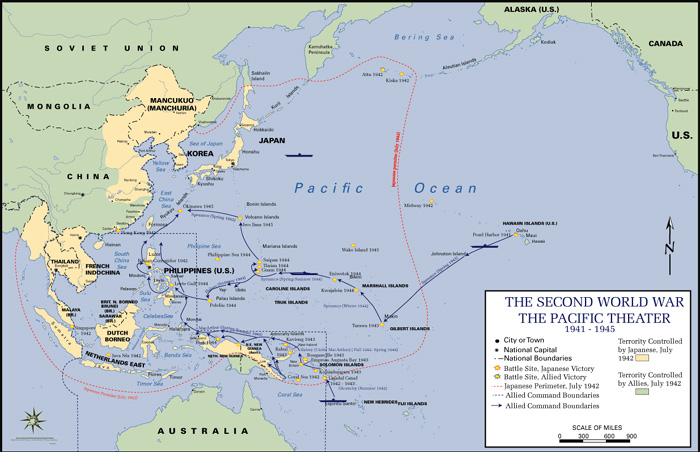 Victory fever gives way to desperation in the Pacific

Americans were in shock and despair on Christmas Day 1941 when Admiral Chester Nimitz arrived in Pearl Harbor to begin the job of picking up the pieces. War was now in both hemispheres, and Pearl Harbor was the worst humiliation in American history. The country was gripped with fear and panic as it attempted to rally for war with Germany and Japan. There was also a lot of conflict between the US Army (led by General Douglas MacArthur) and Navy (led by Admiral Chester Nimitz) in the Pacific which led to bitter and wasteful battles over scarce resources and poor coordination in the key military operations in the widely stretched battles. Nimitz’s strategy for success was to safeguard American supply lines/resources while blocking Japanese oil lines. 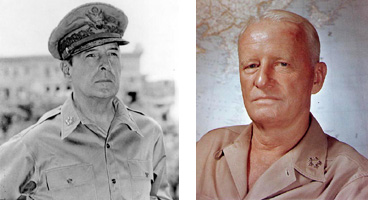 While America mobilized for the war, Japan, celebrating its successes, had to decide its next move: either move westward through India and link up with German forces in the Middle East or Russia to cut off Allies' supply of oil from Baku and Iran. Japan decided instead to mount an attack on Midway Island, 1,100 miles west of Hawaii, to extend its defense perimeter. The Battle of Midway, in June 1942, contrary to the expectations of the Japanese, turned out to be a decisive turning point in favor of Americans. Japan underestimated American submarines and resolve. American manpower, resources, technology, organizational ability and sheer determination after Pearl Harbor resulted in a decisive shift in the balance of power as the Japanese were pushed back in the Pacific in one bloody battle after the other. Suddenly, the feeling of invincibility that surrounded the Japanese Army had been pierced.

Japan assumed the resources of the Southern Zone would secure Japan the staying power to maintain a “Pacific wall.” The strategy was a gamble as Japan’s major weakness became the vulnerability of its shipping/supply lines to American submarines. They clearly underestimated American submarines and the men who sailed on them. Japan thought Americans were too soft and luxury-loving to endure undersea living and warfare. However, American submarines were the best in the war as they were deadly especially with improved torpedoes. The Battle of the Marus (a term used to describe merchantmen) turned out to be a long, drawn-out confrontation between American submarines and Japanese ships between the Southern Zone and the Home Lands. Having cracked Japanese codes, American submarines could easily detect convoy positions, and by 1944, the sinking rate outran new tanker construction rate. Of Japan’s total wartime steel merchant shipping, about 86% was sunk, while another 9% was seriously damaged – oil tankers were also a favorite target. The submariners, less than 2% of US naval personnel, were responsible for 55% of Japan’s total loss.

With the ever-tightening blockade on Japan by the submarines, “The shortage of liquid fuel was Japan’s Achilles' Heel.” Oil imports that had risen to their peak in the first quarter of 1943 were about half that at the same time one year later in 1944 and had completely disappeared/dried up by the same time in 1945. Desperate, Japan tried many forms of improvisations as the oil situation worsened. Industrial oil was made from soybeans, peanuts, coconuts, and castor beans. Potatoes, sugar, rice, and sake were even converted to alcohol to be used as fuel. By 1944, civilian gasoline consumption was down to 257,000 gallons, just 4% of the 1940 figure. Japan revived its 1937 synthetic fuel attempts, and in 1943, Japan’s synthetic fuel production amounted to 1 million barrels – only 8% of the target amount. Over half of this value was in Manchuria, which was useless in late 1944 and 1945 due to the blockade. Besides, synthetic fuel was a drain on resources, manpower, and management and was more of a liability than an asset.

The overall consequence of the oil shortage caused the naval strength of the Japanese fleet to be divided when it truly needed to be combined. Part of the fleet was based in Japan waiting for new aircraft and pilots, and the heavy battleships were stationed near Singapore closer to the East Indies supply. The shortage worsened in 1945, and navigation training for flight pilots was eliminated. Pilots were simply to follow their leaders to targets with the expectation that most would not return. This lack of training, of course, caused the Japanese to lose up to 40% of their aircraft on ferrying operations alone.

The Americans put forth a devastating package of amphibious warfare, carrier airpower, and industrial might - an enormous expenditure of resources Japan could not match. The Allies had successes from one island to the other in the Pacific with the Japanese. America even revenged for Pearl Harbor when, in April 1943, Americans waiting in ambush shot down the plane of Admiral Yamamoto, the architect of Pearl Harbor, sending him to his death in a jungle near New Guinea.

Eventually, the urgency of fuel led the Imperial Navy to throw all of its weight into the Battle of Leyte Gulf off the Philippines in Oct 1944 as the noose was then growing pretty tight. The shortage of fuel handicapped the Japanese again and again, and the 3-day battle led to a devastating defeat for the Japanese. The losses included three battleships, the four remaining aircraft, ten cruisers, and thirteen destroyers. The desperation led to a new weapon introduced by Japan: kamikazes or suicide pilots. These pilots, given only half of the oil required, were expected to crash their planes and bombs into American ships causing damage/destruction while saving fuel for the return trip!

While Japan’s condition continued to worsen, the Americans had an abundant fuel supply in the Pacific with huge floating bases made up of fuel barges, repair ships, tenders, tugs, floating docks, salvage ships, lighters, and store ships that gave the U.S. Navy long legs across the Pacific. In 1944, Guam became a major American base for bombing Japan, providing 120,000 barrels per day of aviation gasoline. Just from this one location alone, Americans used 6 times as much oil as the Japanese. By early 1945, Manila had been recaptured at an appalling cost, 6,800 Americans and 21,000 Japanese died, and 20,000 Americans were wounded for a 4.5 x 2.5 miles island. At home, in Japan, oil had virtually disappeared from the domestic economy, and gas, electricity, and charcoal were all in a severely short supply. Food intake was also down to less than 1,800 calories per day compared to the daily minimum required amount of 2,160 calories. To most observers, the sinking of the Yamato, the world’s largest battleship and the pride of Japan, by American warplanes before it could even undertake its suicide mission marked “the end of the Imperial Navy.” Still, however, Japan will not give up.

The Imperial Navy, in growing desperation for fuel, launched the pine root campaign where pine roots were dug up and heated for 12 hours to produce a crude oil substitute. Each gallon of pine root produced required 2.5 man-days of work. Thus, the official 12,000 bbl/d target would have required 1.25 million persons per day! By June 1945, pine roots were producing 75,000 barrels per month fuel. However, the refining technology for pine roots oil was still lacking. In Spring 1945, a new government came into power in Japan headed by the 80-year-old retired admiral, Kantaro Suzuki. Suzuki ordered a survey of Japan’s fighting ability to determine if they were sufficient to carry on the war, and the report issued in mid-June 1945 indicated that while fuel oil in April 1937 was 29.6 million barrels, by July 1, 1945, it would be just 0.8 million barrels, and for all practical purposes, Japan was out of oil!

The possibility of surrendering was far from being accepted for many at the top of the Japanese government. Japan put up a fierce resistance to the American invasion of Okinawa in April of 1945, and that did not end till June 21, 1945, with a 35% American casualty rate on that island alone. The bloodiness and stubbornness of the Okinawa battle led to the decision of America to use the new deadly weapon – the atomic bomb, if necessary. Tokyo rejected the Allies’ Potsdam Declaration, which would have allowed Japan to quit the war on reasonable grounds, including retaining the Emperor. On August 6, 1945, the first atomic bomb (code name, Little Boy) made from uranium dropped on Hiroshima, and on August 8, 1945, the Soviet Union declared war on Japan and sent troops pouring into Manchuria. On August 9, 1945, the second atomic bomb (code name, Fat Man) made from plutonium was dropped on Nagasaki.

Finally, on the night of August 14, 1945, the Emperor made a phonograph recording of Japan’s surrender message. Some still didn’t want the war to end as soldiers tried to break in the Imperial Palace to steal the recording before it aired and to also assassinate Premier Suzuki. However, the attempt was unsuccessful and finally, on August 10, the Japanese people heard the call to surrender and the war with Japan was over. Many of the Japanese war leaders including the War Minister, Korechika Arami, and Admiral Onishi, committed hara-kiri or ritual suicide after the surrender. The Allies Supreme Commander, General Douglas MacArthur, arrived in Japan on August 30 to sign the surrender documents. Twelve days later, on September 11, when American officials arrived in the house of General Hideki Tojo, former War Minister and wartime prime minister, to arrest him, he shot himself and his life hung in the balance due to difficulty in finding a doctor as well as an ambulance with gasoline in its tank! Meanwhile, it should be remembered that he is the one who forced Japan into war under the pretext that the fate of Japan depended on access to oil. The cost of the Pacific War of Tojo and collaborators was enormous - up to 20 million lives were claimed, including about 2.5 million Japanese. Tojo survived the self-inflicted shot, and the next year he was put on trial for war crimes, found guilty, and executed.