The Lecture for The Prize Chapter 25: The Elephants

The Prize Chapter 25: The Elephants

The abundance of oil naturally led to fierce competition for markets, with price cuts as the main weapon. Meanwhile, the two pillars of the postwar oil order involved the oil deals of the 1940s which tied reserve development into refining and marketing networks of the big oil companies and the concessions & contractual relationships between the oil-producing countries and the companies. At the heart was the 50-50 principle which psychologically assured stability. Countries like Iran, however, continued to explore ways to increase their revenues, but the international consortium served as a major block of the effort.

Iran eventually turned to an Italian man with a mission - Enrico Mattei, the Italian Rockefeller. He was a born leader, who was partisan during WWII and believed in “act first, then get permission later.” His primary objective was to obtain for Italy, the state-owned Azienda Generali Italiana Petroli (AGIP), and himself a place in the oil industry by ensuring that Italy had its own international oil supply independent of the Anglo-Saxon companies. As the man in charge of AGIP, he drilled for oil, hit natural gas instead, and used the earnings from natural gas to expand AGIP domestically and internationally. In 1953, all the Italian state hydrocarbon companies including AGIP and the pipeline company, SNAM, were consolidated into Ente Nazionale Idrocarburi (ENI) with Mattei as the head. Mattei built ENI into a major integrated oil company in Italy, but he desperately wanted to gain foreign access to crude oil for ENI and Italy.

Mattei coined the term, “Sette Sorelle,” or “Seven Sisters” – the Anglo-Saxon Club, Exxon, Mobil, Chevron, Texaco, Gulf, Royal Dutch/Shell & British Petroleum and the eighth sister, CFP (French). He resented the big oil companies and was furious when he was excluded from the Iranian consortium. He started talking with the Shah after Suez and struck a 25-75 deal. Although he didn’t find much oil, the psychological 50-50 principle had been cracked and was now about as dead as the 4-minute mile with his 25-75 deal! Mattei actually took advantage of the Shah’s ambition as well as the fact that, unlike the other countries where the producing companies owned the oil per the terms of the concessions, the Iranian government owned all the oil resources per the legacy of Mossadegh’s nationalization.

Japan, with its strong dependence on foreign oil and a booming economy, also jumped into special deals to secure its own independent oil source separate from the American and British companies. To this end, they created the Arabian Oil Company and brokered the first true break from the 50-50 deal, negotiating 43-57 deals with both Kuwait and Saudi Arabia plus the right of the countries to acquire equity shares if oil was found. Arabian Oil Company drilled offshore in July 1959 and struck oil in January 1960 causing Kuwait and Saudi to quickly exercise their right and acquiring a 10% equity share in the company. By the mid-1960s, Arabian oil provided Japan with an independent source of 15% of Japan's total supply.

Even some of the American companies got into the game of deals outside the 50-50. Standard Oil of Indiana, that had long regretted the sale of its Venezuelan oil during the Great Depression in the 1930s to Jersey, also signed a 25-75 deal (plus large upfront money) with Iran in 1958 and also hit oil. Clearly, by this point, oil production was exceeding demand, and firms all over the world were rushing to sign contracts with Middle Eastern countries.

Influence of Nasser, the “Arab Oil Experts” and Alfonso on Oil in the 1950s

Nasser’s ideal of pan-Arabism continued to grow and culminated with a coup and the grisly slaughtering of the royal family in Iraq. Egypt also managed to get the Soviet Union to fund the building of the Aswan Dam and the Syrians to join Egypt in forming the United Arab Republic. With the Suez in Egypt and the Saudi and Iraqi pipelines running through Syria, the United Arab Republic dangerously controlled the transit routes of the Middle East Oil. Even though Egypt was not an oil exporter, Nasser used frequent meetings among “Arab Oil Experts” as a way of inserting himself in the center of oil politics as oil was a central focus on rising Arab nationalism. Incidentally, a dominant subject of such meetings was economic warfare against Israel. With the breaks from the 50-50 principle, the new Iraqi government also demanded changes in the contract with the Iraq Petroleum Company. In the spring of 1957, several “Arab oil experts” proposed building an Arab tanker fleet and pipeline & refining, creating an Arab international body or consortium, but they needed the cooperation from Iran & Venezuela which are non-Arab countries. For this to happen required the role of Juan Pablo Perez Alfonzo of Venezuela.

Juan Pablo Perez Alfonzo studied medicine in the US (at Johns Hopkins) and law in Caracas and was the intellectual godfather of OPEC. His loss of his family’s wealth and other experiences made him have a strong commitment to conservation and planning. While in the US, he devoted himself to studying the oil industry, especially the Texas Railroad Commission. He saw the dangers of “oil wealth” and believed it was a “gift of nature and politics” and not from hard work. In his view, the dangers of oil wealth included laziness, a spirit of not caring, and the commitment to buying, consuming, and being wasteful. He felt that low oil prices would result in early depletion and was also aware that Venezuelan oil production cost was higher than that of the Middle East (80 cents vs. 20 cents a barrel). His views of the Venezuelan & Middle Eastern oil were therefore to raise Middle East production cost and limit production. 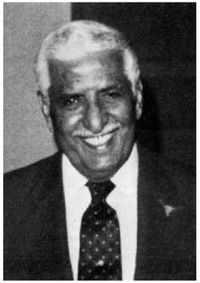 Sheik Abdullah Tariki was a co-founder of OPEC, the Organization of Petroleum Exporting Countries.
Credit: "From the Archives: Abdullah Tariki in Texas" The University of Texas at Austin, Jackson School of Geosciences Newsletter 2006.

In 1959, the Eisenhower administration reluctantly put quotas on foreign oil imports, reducing Venezuela’s exports. Mexico and Canada were exempted on grounds of national security, leading Venezuela to protest vigorously with outrage. Alfonzo made a proposal for a Western Hemisphere oil system run by governments and not the companies, but the US rejected the proposal. This drove Alfonzo to Egypt where he met with Abdullah Tariki, the Red Sheikh, and the oil minister of Saudi Arabia. Tariki was educated at the University of Texas in geology and chemistry. He was a Saudi nationalist who supported Nasser and wanted to integrate every step of the oil process in Saudi Arabia. He even, at one time, considered the nationalization of Aramco. His focus, however, changed to production and prices when prices were cut in early 1959, and he felt control of prices and production was more important than nationalization and integration.

Taxes and royalties were based on posted prices which are the prices at which a company will buy or sell a commodity in markets where an official exchange does not operate. On the other hand, the market price is the current or economic price for which a good or service can be bought or sold in the marketplace or open market. The oil-producing countries attempted to increase revenue through hikes in volume, not price increases. To sell this oil, the companies were forced to offer bigger discounts on the market price. Thus, in the 1950s, the market price dropped drastically from the posted price, causing the companies to take the brunt of the damage. To make matters worse, the Soviet Union struck more oil at the new Volga-Urals area and re-emerged as a major exporter. Previously, most of the Soviet production was consumed domestically but, by 1955, they had resumed oil exports. To get back into the market the Soviets cut prices as part of the “Soviet Economic Offensive.”

To combat the Soviet Union’s oil, oil companies cut prices again in 1959…except, this time, they cut the posted price. Oil experts, including Tariki and Alfonzo, were furious, as the revenue of the producing countries was based on the posted price. What was most upsetting was the fact that, with the simple stroke of a pen, the oil companies had unilaterally cut the revenues of the oil-producing countries. An Arab Oil Congress that had been scheduled for April 1959 met in Egypt with the notable absence of Iraq because the congress was being held in Cairo giving Nasser a decisive say in oil affairs when Egypt was not a major exporter of oil. Venezuela sent a delegate as well. 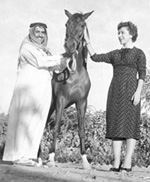 Wanda Jablonski was a correspondent of Petroleum Week and Editor of Petroleum Intelligence Weekly who attended the meeting as a journalist. She was the most influential oil journalist at that time and was resolute and independent as Ida Tarbell. She had traveled widely around the world and once said, “I have a different attitude towards the world, I can’t fit in any one spot, except New York.”

While at the 1959 Cairo Oil Congress, she arranged a meeting between Alfonzo and Tariki over a bottle of Coke. At another secret meeting of Alfonso and Tariki at a yacht club in Maadi, a suburb of Cairo, they invited a Kuwaiti, an Iranian, and an Iraqi (who was there on behalf of the Arab League).

The secrecy was such that the Iranian said, “We met in a James Bond atmosphere.” At the meeting, the representatives came to a Gentleman’s Agreement along the ideas of Perez Alfonzo to establish integrated national oil companies, defend the price structure, and dump the 50-50 deal for at least a 60-40 split, and create an Oil Consultative Commission.

This, through the matchmaking of Wanda Jablonski and the vision of Perez Alfonzo, was the beginning of OPEC (the Organization of Petroleum Exporting Countries).