The Prize Chapter 30: “Bidding for Our Life”

The Prize Chapter 30: “Bidding for Our Life”

The Recipe for Panic, Scrambling and High Prices

The embargo clearly signaled a new period of oil influence. The oil embargo was made up of two parts: rollbacks on production that impacted the entire market and specific bans on oil to the “Unfriendly” countries (US, Netherlands, Portugal, South Africa, and Rhodesia). In executing the embargo, the Arabs had categorized countries between “unfriendly,” “neutral,” “preferential/friendly,” and “most favored.” In November 1973, the Arabs decided to increase the size of the cuts, and at the height of the embargo in December, there had been a net shortfall/loss of 5 mmbpd: from 20.8 mmbpd in October to 15.8 mmbpd. The recipe for panic: war and violence, supply cutbacks, embargoes, shortages, desperate consumers, fear, and uncertainty led to both companies and consumers looking desperately everywhere for supplies for use and storage. The panic and scrambling led one refiner to say, “We weren’t bidding just for oil, we were bidding for our lives.”

OPEC was able to cut production and maintain a profit due to the high prices. Thus, they could sell less & earn more! The price of oil shot up in October to over $15 a barrel. Iran & Iraq increased production to take advantage of the price hike. American gas prices rose by 40%, and suddenly the age of oil shortage was leading to lost economic growth, recession, and inflation, and the US was on the defensive and being humiliated by a few small nations. The effect of the embargo on the psyche of the US, Western Europe, and Japan was dramatic. Up until October 1973, the US public did not even know the US imported oil. The most visible symbol of the embargo in the US was the gas lines, as US motorists, who were used to driving until their gas gauge read “empty,” now filled the tank constantly, afraid that oil would run out. This created long lines and up to TWO HOUR waits at gas stations. Ironically, drivers waiting in long lines with their engines running and tempers rising seemed to burn even more gas than they were able to buy. Of course, the panic buying meant extra demand in the market and higher prices! 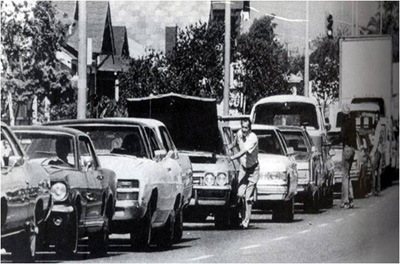 The embargo and its consequences came as a shock to the industrial countries. Suddenly, the Club of Rome predictions, “The Predicament of Mankind” published in 1972, seemed to be coming true. If you remember from Chapters 27 and 28, the Club and E. F. Schumacher had predicted that if population, industrialization, pollution, food production, energy consumption, and resource depletion continued unabated, it would lead to limits to growth and unsustainable industrial civilization within 100 years. E. F. Schumacher also wrote a timely book, Small is Beautiful, in 1973, and the phrase “less is more” became a favorite of the environmentalists. 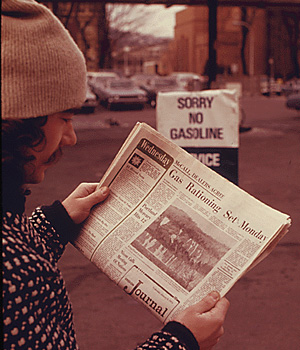 Gas rationing system (odd-even plan) is announced in an afternoon newspaper being read at a service station with a sign in the background stating no gas is available (1974).
Credit: Flickr

How were the world economy and political institutions going to weather this storm? On November 7, 1973, Nixon made several proposals in a major energy address that included people turning down thermostats and car pooling. Nixon now saw energy as a crisis and high politics, as the public, devoid of confidence, clamored for rationing. Eventually, Nixon ordered the rationing stamps printed but held them in reserve. The public blamed the oil companies & Nixon for the embargo, shortages, and price hikes. Misinformation, mistrust, confusion, and fear were the order of the day. Congress was engrossed in Watergate, and any presidential energy action lost out in news coverage to Watergate, leading White House adviser Roy Ash to indicate, “Nothing could win against Watergate.”

With the global agitation, anger, suspicion and suffering, the issue was how the available oil was going to be distributed/rationed/allocated. The Arabs masterfully managed to split and put a wedge between the industrial countries. Japan, without any local energy sources, was the most vulnerable, and interestingly, Britain was placed in the “friendly nations” category.

The companies were caught in the middle. For example, how would it look to see an American company implementing an embargo against the US? The companies decided to use “equal suffering” and “equal misery”- production cutbacks would be applied equally among all countries, with Arab oil going to Arab friendly countries and Non-Arab oil going to the US and other countries under the embargo. This was no easy process, as numerous logistical allocation decisions regarding price, distribution, and production had to be made. The companies also had to figure out many things that were constantly changing per week and complicated by leapfrogging and retroactive increases by exporting countries, such as actual costs (to avoid losses), the cost for royalties, government participation, buyback prices, volumes, etc. To a large extent, the companies made it work, as, over the embargo period, the loss to Japan was 17%, to US was 18%, and to Western Europe was 16%.

In December of 1973, OPEC increased the price of oil again, this time to $11.65/barrel. The Shah was the driving force and is known to have indicated after the increase that, “…those children of well-to-do families …..will have to work harder …..and earn their living somehow.” As we will see, his words cost him dearly when he later needed friends. The embargo was seen as a political act that took advantage of economic circumstances. It therefore had to be resolved politically first between the Arabs and Israel, then between the industrial countries, and finally between the US and the Arabs.

At the start of the embargo, the European allies, led by France, distanced themselves from the US, as they thought the US was too confrontational. The US, on the other hand, thought Europe was too soft on OPEC. Thus, the embargo divided the consuming countries based on the Middle East labels placed on each country (i.e., friendly - got lots of oil and were supportive of Arab states; neutral - got less oil and had no opinion; and unfriendly - had no oil and were supporters of US and Israel).

At first, Japan was shocked to find itself labeled “unfriendly,” and changed to support the Arab states, making this Japan’s first action since WWII that was different from the US. Thereafter, Japan was exempted from oil cutbacks by the Arabs. Despite pressures from the Arabs, Japan, however refused to break diplomatic relations with Israel.

International Agency to Combat Bilateralism and the End of the Embargo

The US feared bilateralism, where one country would barter with another. In this case, oil consuming states would barter with the Middle East for only a few weeks worth of oil. So, the US called an energy conference in February of 1974 to calm down fears about competition over supplies, heal the rifts created among the Allies, and ensure that oil does not permanently divide the Allies. The British, although “friendly,” were in the middle of an energy crisis and agreed to attend. Japan and Germany also attended. The French, however, did not. The International Energy Agency (IEA) was established at that meeting to help deflect drives for bilateralism and to establish the political and technical framework for a common response.

The Arab producers loosened the embargo at the end of 1973. Sadat, now being taken seriously in negotiations with the US and Israel, saw no further need for the embargo. He now fearing it would actually harm Egypt, soon became the key advocate for its cancellation. After a lot of convincing, the Arab states lifted the embargo on March 18th, 1974. In June 1974, Richard Nixon visited Israel, Egypt, Syria, and Saudi Arabia, and the embargo was history. The enthusiastic receptions that greeted him during his visit to the Middle East countries were in stark contrast to the bitter antagonism towards him at home. 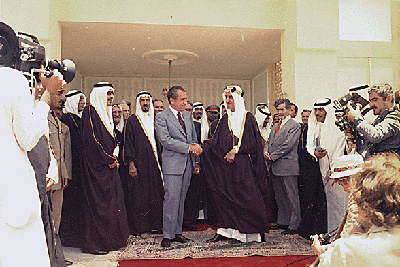