The Lecture for The Prize Chapter 36: The Good Sweating - How Long Can It Go?

The Prize Chapter 36: The Good Sweating - How Long Can It Go?

How Low Could the Downward Spiral of Oil Prices Go?

With oil now a commodity in the 1980s and prices spiraling downward compared to the surge in the 1970s, the question was, “How low can it go?” The answer to that had huge implications on the oil companies, the future of “oil power,” global economy, and the shifting balance in world economic and political strength. Clearly, high prices favored exporting nations (OPEC and non-OPEC), and low prices favored the oil-importing nations (Germany, Japan, and the many developing nations). The US had interests on both sides, as it was the world’s second-largest producer and the world’s largest importer and consumer. 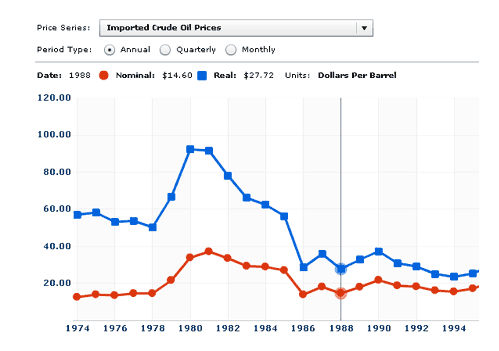 In spite of OPEC’s more restrictive actions in 1984, the quota system was still not working: Non-OPEC production continued to increase; demand for alternatives to oil (coal, nuclear, and natural gas) increased, and conservation and efficiency were weakening demand. Quota cheating among OPEC nations also did not help. Some exporters even turned to barter trading of oil directly for weapons, planes, and industrial goods, further increasing the oversupply. The realignment of oil trading in the early 1980s, the need to manage price risk, and the rise of energy commodity trading all fed into the growing oversupply and downward price movement. In fact, things got to the point where Margaret Thatcher saw no security reason to maintain the British National Oil Company, and in spring 1985, she abolished it, removing the British finally from direct involvement in the oil business.

OPEC was faced with two choices: cut-price or continue to prop up the price (by cutting production). What were the issues with each choice?

The issue with price cut goes back to the question of: how low can it go? or where would the price fall stop? Cuts in production would make non-OPEC oil, alternative energy sources, and conservation flourish in addition to the huge revenue loss. In 1981, for example, the Saudi revenues were $120 billion but had plunged to $26 billion in 1985, even with its swing role in the OPEC quota system. Saudi oil at one time dropped to 2.2 mmbpd, half of its quota level, and about a fifth of what it had produced a decade earlier. In summer 1985, Saudi output was actually less than that of the British sector of the North Sea!

Saudi, therefore, decided to move from price defense to volume defense by increasing production and adapting “netback deals” with the Aramco partners and other oil companies in key markets. The netback deals allowed payments to be made based on what the refined products earned in the marketplace instead of a fixed price to the refiner. There were two advantages/objectives to this strategy: gain some revenue from volume increase, and instill discipline among the cartel “cheating” members. Saudi, in essence, was now waging war against the other OPEC countries, and OPEC had to “secure and defend for a fair share of the world market.” Saudi’s strategy of increased volume without regard for the price was a perfect recipe for further falling prices.

The Third Oil Shock and the Reverse Good Sweating

The third oil shock was as dramatic as the crisis of 1973-74 (first oil shock) and 1979-81 (second oil shock) except that the consequences this time were in the opposite direction. West Texas: crude that had sold at $31.75 per barrel in Nov. 1985 had fallen to $10 per barrel (70% drop in a few months!). Some Persian Gulf cargoes even sold for $6 a barrel. Exporters scrambled for markets rather than buyers for supplies. This time, buyers not sellers were playing leapfrog. For consumers, the issue of security of supply had evaporated. Not only were prices falling, but they were out of control, and, for the first time, there was no price-setting system or structure-no official OPEC price. OPEC countries were bitterly divided and fiercely battling with each other. The non-OPEC countries were equally suffering, and some (Mexico, Egypt, Oman, Malaysia, and Angola) even attended the 1986 OPEC meeting as observers. Discussions between OPEC and non-OPEC went nowhere, and with that, the “good sweating” for both OPEC and non-OPEC members continued through spring 1986.

Of course, consumers were ecstatic as their standard of living and improved lifestyles were no more in jeopardy. Billy Jack Mason, who owned an Exxon gas station in Austin, Texas, even decide to “create a little action” by having a one day promotional in 1986 giving customers free gas, resulting in a stampede and gas lines stretching miles. People came all the way from Waco for free gas in Austin!

George H.W. Bush, the Oilman and Politician, and his Middle East Trip 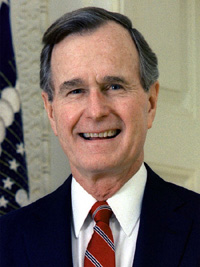 George H.W. Bush graduated from Yale and set off to Texas to be an independent oilman in Midland, Texas. He formed Zapata with some partners, and after some years, they split the company into two, and Bush took the offshore services business. Eventually, he gave up the oil business for politics and became a Congressman, UN Ambassador, Chairman of the Republican National Committee, US envoy to the Peoples Republic of China, Director of the CIA, Vice President (to Ronald Reagan), and, eventually, President (41). He was the Vice President during the oil price collapse in 1986 which was devastating to the US domestic oil industry to which Bush had a special relation. Employees were fired, drilling rigs were packed, and the economy of the Southwest was depressed. Besides, if the prices continued to stay low, there was fear that consumption/demand would rise, domestic production would decline, and imports would again flood the US market. If pushed, the US would have had only two options: tariffs or forcing OPEC to get its house in order. The notion of a tariff always caused outrage among the exporters, as it meant shifting revenues from the exporters to the importers. Who else could talk to OPEC, especially the Saudis, then the oilman turned politician-George H.W. Bush.

Bush was sent on a Middle East mission in 1986 with the objective of outlining the US support for the moderate Arabs in the Persian Gulf region. But, of course, everyone knew oil would be discussed. While Reagan did not want to interfere with the oil situation and wanted the free market forces to resolve it, there was a minority in his administration, including Bush and the Secretary of Energy, who believed the oil prices had reached a point when it was threatening national security. To them, a strong domestic industry was in the national security interest of the US. It is believed that Bush discussed with the Saudis the threatened security interest of the US and even threatened them with the “tariff weapon.” The Saudis, who realized their own security depended on the security of the US, were sold and reconsidered their fierce battle for market share.

The Consensus Oil Price: $18 Per Barrel

Even though the increase in output was modest, the effects on price had been major. Eventually, it was determined by all concerned parties that $18 per barrel, $11 less than the official OPEC price of $29, was the “right” price of oil. This was the equivalent of the mid-1970s price after correcting for inflation. This was felt to be the price that would achieve all the competing objectives: make oil competitive with other sources and conservation, stimulate worldwide economic growth and demand for energy, and cap or reverse the non-OPEC production.

In May 1986, the Kuwait oil minister at a meeting in Taif, Saudi Arabia, acknowledged that the $29 a barrel had done OPEC “more harm than good.” Yamani also clearly stated at the meeting, “We want to regain our market power.” OPEC also restored quotas to go along with the $18 per barrel. Even Iran backed down from its entrenched resistance and became pragmatic in its oil policy. The non-OPEC producers also cut their output. With the consensus within OPEC, the US, and other non-OPEC countries for $18 per barrel, and the good faith effort of all parties, the market stabilized and the “good sweating” eased.

The Sad End of the Yamani Era, the Good Sweating, and the Iran-Iraq War

John Harvard emigrated from England to Massachusetts and established a school in 1636 that was later named after him-Harvard University. At the September 1986 350th anniversary of Harvard University, Yamani & Prince Charles were the invited guest speakers. Prince Charles gave a brief and entertaining speech. Yamani gave a detailed and analytical speech (17 pages with supporting data) which called for price and output stability of a “special commodity.” At the end of the speech, someone asked him how oil policy is made in Saudi Arabia, when in the US it was so hard to come out with a policy since the House, Senate, President, and even various agencies are always fighting with each other. Without any hesitation, Yamani answered, “We play it by ear.” A month later, he was “relieved” of his post, ending a successful 24-year career. What is interesting is the abrupt, embarrassing, and disconcerting way he was fired. He found it out on the television! The many reasons people attribute to his dismissal include: he embarrassed the Saudi Royal Family; he had made powerful enemies by opposing barter trade; the move reflected the change in policies associated with him; and resentment of what some called his arrogance, patronizing manner, high profile, and celebrity status outside Saudi. Yamani returned to private life and managed his vast fortune.

His successor, Hisham Nazer, attended his first OPEC meeting in December 1986 at which OPEC finally brought the “good sweating” to an end. The framework of agreements on price and quotas held through 1987, 1988, and 1989. The Third Oil Shock completely wiped out all the gains of the Second Oil Shock in 1979-81, and the economic benefit to consumers was huge. While there had been an “OPEC tax” in the 1970s, there had been an “OPEC tax cut” in the 1980s. This tax cut stimulated the economic growth of the industrial nations and also drove down inflation.

Meanwhile, Iran was feeling the heat on the battlefield with Iraq’s use of chemical weapons and from US Navy guarding supply lines in the Persian Gulf (the US Navy had tragically and unexpectedly mistaken an Iranian civilian plane with 290 passengers on board for a hostile aircraft and shot it down). Late 1988, Iran & Iraq signed a ceasefire leading Khomeini to declare that “Taking this decision was more deadly than taking poison.” The ceasefire went into effect on August 20, 1988, one month short of eight years since the war started. Khomeini was still determined to seek revenge against the “Al Saud and America” at a later date, but, within a year of the ceasefire, he died.

Important lessons learned during the Oil Shocks included the importance of stability of demand & supply and the fact that price stability and ample supplies were necessary to ensure this. Interestingly, when the Kuwaiti Oil Minister was asked in spring 1989 about how long the lessons of the Oil Shocks would be remembered, he responded, “about 3 years,” and within one year he was no longer a minister, as Kuwait had been invaded by Saddam Hussein.