The Lecture for The Prize Chapter 37: Crisis in the Gulf

The Prize Chapter 37: Crisis in the Gulf

1989 was the miracle year in which the East-West confrontation or the Cold War was over. The communist Eastern Europe regimes and the Berlin Wall had all collapsed, and the Soviet Union was in a historic transformation from political and economic changes as well as ethnic nationalisms. German reunification was solidly on course, with Germany poised to be the dominant power in Europe. Japan was viewed as the global financial powerhouse, and future confrontations were expected to be based on money, markets, and economic growth. Oil, except its environmental concerns, had become unimportant and just another commodity. There were no concerns in the US about supplies, as proven reserves had increased from 670 billion barrels in 1984 to 1.0 trillion barrels in 1990. It should be noted, however, that the world reserves were still concentrated in five major oil producing countries in the Persian Gulf plus Venezuela. Demand was growing, American production was declining, US imports of oil were climbing, and at its highest point, conservation was slowing, efforts to develop alternatives had became anemic, the security margin (the difference between demand and production) was shrinking, low prices and low security of supplies were the order of the day, and the world was moving to heavy dependence on Middle East oil again! Even with the conflict and tension between energy and the environment unresolved, energy issues seemed like a footnote and a thing of the past. 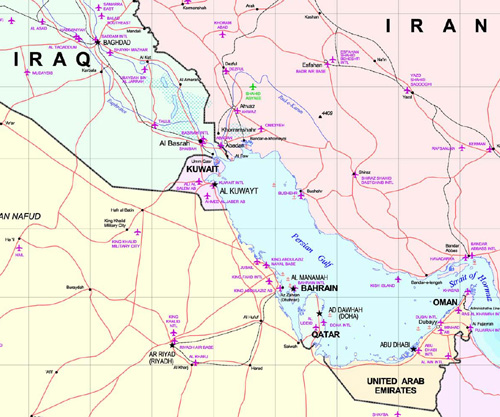 Since 1985, Iraq had been the world’s largest producer of weapons with the objective to dominate the Arabs, gain control of the Persian Gulf, make Iraq the key oil power, and eventually turn the “Greater Iraq” into a global military power. Saddam Hussein’s nuclear weapons fuel facility was destroyed by the Israelis in 1981, but he had developed, boasted, and actually used chemical weapons on the Kurds and Iranians. The nearly eight year Iran-Iraq war that ended in a stalemate had cost Iraq dearly from the population (half a million deaths and serious casualties) and financial viewpoints. Iraq, with 18 million people, was supporting a one million man army, and nearly 30% of its total Gross National Product (GNP) was earmarked for Saddam’s military, creating a serious financial problem/drain for Iraq.

In July 1990, Saddam Hussein, under the pretext of serving as the enforcer of OPEC’s new quota system and threatening Kuwait and the United Arab Emirates if they cheated, amassed 100,000 troops on the border with Kuwait. Interestingly, the only OPEC country that was cheating by mid July 1990 was Iraq! He promised Egypt and Jordan that he had no plans or intention of hostile action but was only there to serve as a deterrent for cheating. On August 2, 1990, however, Iraq invaded and annexed Kuwait, claiming that Kuwait belonged to Iraq and that the Western imperialists (the British) were the ones who had arbitrarily partitioned the two countries to deny Iraq of its oil. In reality, Kuwait’s origin dated back to 1756, well before 1920 when Iraq was formed from three provinces that were part of the Ottoman Empire. Besides, when the border was adopted in 1922, no one even believed there was oil in Kuwait.

After the invasion, there was Iraqi plundering of Kuwait. If allowed to stand, Iraq would control 20% of world oil. Iraq also moved towards Saudi Arabia. President George H. W. Bush announced, “A line has been crossed, this will not stand, this aggression against Kuwait.” The United Nations imposed an embargo, and many nations rushed military forces to the region, fearing Saudi Arabia might be next. The opposition to Saddam was worldwide, unanimous, and unprecedented. Saddam had miscalculated if he thought the world was going to sit still or be divided. Aggression, sovereignty, and post-Cold War order were all valid reasons for appropriate response. It was feared that it would not take Saddam long to turn Iraq (with all of its oil resources, and equipped with nuclear and chemical weapons) into a regional military power and into a superpower. If this scenario were allowed to continue, it would get to a point when it would be too late and difficult to put in check. Thus, on the basis of oil, but not cheap oil, as a critical element in global balance of power and stability, the world, led by the US, had to act, and the US helped to put up an unprecedented international coalition to face up to Iraq.

With the embargo, 4 million barrels of oil were lost from the world supplies, similar to 1973 and 1979, and, as expected, uncertainty, fear, and anxiety caused a sharp rise in prices and the fall of financial markets. OPEC now had to deal with sovereignty and national survival in addition to prices. Compared to 1973 and 1979, however, there were no allocations or controls in the US, and no gas lines or supply dislocations occurred, and by December 1990, the shortfall had been made up by increases in production from other producing countries especially Saudi Arabia. In fact, this time, no action was formally taken by the International Energy Agency to coordinate distribution as economic recession was weakening demand anyway. The US was also prepared to adopt the principle of “early release” not necessarily “physical shortage” of the Strategic Petroleum Reserve (SPR).

While Saddam Hussein was praying for time and hoping for an opportunity to play the “Israeli card” to split the Arabs from the coalition, the US also realized timing was critical, as the longer the event was allowed to drag, the greater the chances of Saddam being successful. Earlier, the United Nations had passed Resolution 600 that ordered Iraq to withdraw from Kuwait. On November 29, the UN passed Resolution 678 that gave Iraq “a pause of goodwill” until January 15 to comply with Resolution 600. Saddam unsuccessfully tried to split the coalition with the release of several hundred foreign hostages. There was much public debate about what should be done. Some warned of another Vietnam and a quagmire, others equated Saddam with Hitler and argued that if Hitler had been stopped earlier, lives would have been saved.

The US, under the Joint Chiefs Chairman, General Colin Powell, and the US Gulf Commander, Norman Schwarzkopf, put together a huge coalition of international forces from countries around the world and engaged in Operation Desert Storm, which involved the marshaling of forces. After US Secretary of State, James Baker’s unsuccessful meeting with Tariq Aziz, the Iraqi Foreign Minister, in Geneva on January 9, 1991, the US Congress gave authorization to the president on going to war. The votes in the Senate and House were 52-47 and 250-183 respectively in favor. The “pause of goodwill” passed on January 15, 1991 without compliance, and on the morning of January 17, the coalition attacked Iraq with intense bombing of both Iraq and Kuwait using 700 planes, beginning the Gulf War. It may interest you to know that, Professor Yeboah was then at the King Fahd University of Petroleum and Minerals, Dhahran, Saudi Arabia, and left there on one of the last few flights allowed out of the Dhahran International Airport the night before the beginning of the war!

The Gulf War showed the first televised use of precision weapons. The air war continued for about a month with daily images of the destruction on TV. Shortly after the start of the war, oil went from $30 to $40 a barrel, but within hours it had plunged to $20 a barrel, well below what it was even before the war! The Strategic Petroleum Reserve (SPR) was used, and besides, demand for oil was falling with the passing of winter. With the extreme success of the initial attacks and the use of the SPR, fear was removed, and supply and demand pushed the price down. 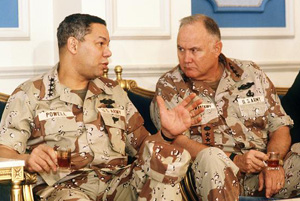 There was little or no defense from Saddam Hussein, and the best he could do was to resort to rhetoric and the use of limited Scud missiles on Israel and Saudi Arabia. Israel, under intense international pressure, did not retaliate or get involved, for fear of pulling the Arabs and splitting the international coalition. Saddam promised that the ground war would be the “the mother of all battles,” but that turned out to be a complete rout. General Norman Schwarzkopf, the US Gulf Commander who had studied the book, tactics, and strategies of General Rommel on mobile and desert war, applied deception and made Saddam believe there was going to be a head on attack. Meanwhile, he moved troops westward through Saudi Arabia.

When the ground war started, the forces in Saudi Arabia swung west behind the Iraqi forces, encircling them and forcing them to retreat or surrender. Thus, the ground assault lasted only 100 hours with the sound defeat of Saddam Hussein. However, they withdrew from Kuwait with vengeance and vindictiveness by initiating the largest oil spill in history (still is) setting Kuwait and its oilfields on fire, and destroying them if he could not have them. More than 600 oil wells were set ablaze with about 6 mmbpd on fire (more than Japan’s daily oil import), creating a huge environmental damage/catastrophe. The ceasefire took place on February 28, 1991. Interestingly, in spite of the devastation and what he had done to his country, people, resources, and infrastructure, he survived and continued to hold on to power as president of Iraq.

America, through the Gulf War, thus demonstrated its superpower capability with technological supremacy on the battlefield that was lethal, quick, and accurate. It also demonstrated its leadership in world politics and tactics which showed a sea change in America’s image from Vietnam. America could no longer be pushed around.

The war showed the effectiveness of the energy security system built around the International Energy Agency (IEA) and the Strategic Petroleum Reserve (SPR). IEA provides a framework for the coordinated response and exchange of timely and accurate information among nations. SPR also demonstrated that given time, markets will self correct, adjust, and allocate. All six major oil price disruptions from 1950 -1991 had shown that logistics and supply systems can adapt to minimize the impact of shortages. For example, in the 1970s, the issue was not one of real shortage but the disruption of the supply system and the confusion of who owned the oil. Also, in the 1970s, the US political system was paralyzed and in disarray with no rational and coherent policy. And, of course, Watergate was a major part of the problem.

The industrial world faced a resurgent wave of the environmental movement. The first wave that came in the 1960s and early 1970s focused on clean air and water and accelerated the switch from coal to fuel oil for heating and power generation. The second was concentrated on slowing or stopping further development of nuclear power. The third wave that started in the 1980s was in reaction to climate change/global warming and its devastating effect on forests, weather changes, and natural disasters. Among the most significant energy related environmental disasters or events since the 1980s are the Chernobyl nuclear accident in 1986, the Exxon Valdez oil spill accident in 1989, and the 2010 BP Deepwater Blowout and oil spill in the Gulf of Mexico. It is clear that the drive for energy security will coexist with the third and future waves of environmentalism as we develop sustainable energy policies. 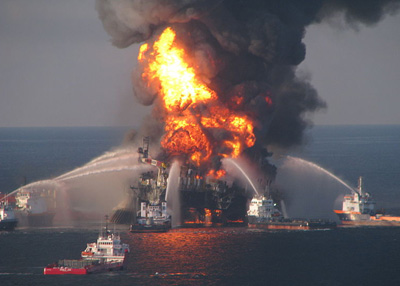 In summary, the rush for oil has not stopped since the cry, “the Yankee (Colonel Drake) struck oil” was heard in Pennsylvania in 1859. Oil has since then had the ability to make and break nations whether in war or in peace. It has also brought the best and worst out of society and produced booms and busts. Oil’s central and strategic role in national politics, economy and strategies, geographical distribution, and recurrent patterns of crisis continue to make it a problematic commodity. Oil powers our daily life, gives us our daily bread, and fuels our global struggles and economy. The fierce search for oil and its riches and power will continue as long as the hydrocarbon man is addicted to it. The irony about oil, however, is that its power comes with a heavy price.