The Lecture for The Quest Chapter 5: The Petro State

The Quest Chapter 5: The Petro State

First, just want to clarify what Exporting Oil means vs Importing Oil. These terms get confused and causes problems in understanding. This is probably a review for some, but just want to make sure these terms are clear!

Exporting Oil - Country A produces (drills from the ground) oil and sells it to Country B who buys that oil.

Country A is Exporting Oil

Country B is Importing Oil

Venezuela is a Country that Exports Oil. OPEC (which we will get into more detail in later lessons) is the Organization of Petroleum EXPORTING Countries. So, when in doubt, remember OPEC is all about Exporting… Every country that buys from OPEC is Importing.

This is a country that relies on oil export profit for revenue to fund a large percentage of the government. This type of country has a nationalized oil company. The profits do not go to shareholders, but to the citizens by way of government subsidies, or welfare programs. The challenge with a Petro State in regards to the government budget; it trusts on the price of oil and the ability to sell the oil to be consistent. We know this consistency does not happen. 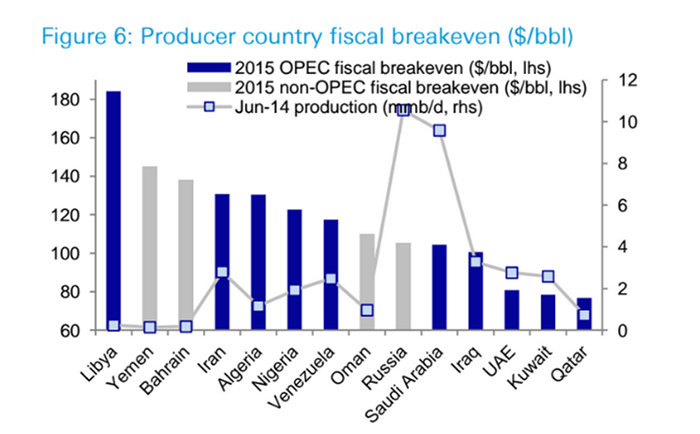 Each Oil Exporting Country has a Breakeven Selling Price
Click for a text description of the Graph.
Credit: Business Insider

The Nationalized Oil Exporting Countries have the challenge to adjust their government budgets to reflect the ever-changing price of oil. In the past, we have seen the price of oil jump from $130 price per barrel to less than $30 price per barrel. Many of these countries did their budgets at the $130 mark only to have the price of oil drop. This creates a dependence on the price of oil always increasing, never decreasing. There is continual ebb and flow of the oil wealth. So, when a country relies on this increasing profit, then the price drops, and a country goes into debt meeting the budget that is set. Another challenge with Petro State is once a country offers an increased welfare program, it is very difficult for the government to cut back or decrease, for the citizens have come to also rely on the program. This creates instability in the country, and we know how instability impacts the oil industry…. Decreased foreign investment and decreased exporting…. Thus, the price drop starts a problem that just grows into a downward spiral.

To check the current price of oil: OilPrice.com.

Venezuela relies on oil to fund the government. This increases the reliance on every aspect of the oil industry not just the exporting, but all the pieces that support the industry. This made every other industry in the country be focused on the oil industry.

So, this is a loose comparison [ football in State College = Oil in Venezuela ] A closer to home example - State College, PA. Large percentage of the citizens rely on Penn State for income. When football game weekends happen, the restaurants benefit, the motels count on being full, the Uber drivers count on higher ridership and thus increased income. This is the same way that Venezuela counts on the oil industry. When a prosperous oil industry happens, the whole country benefits.

Venezuela has challenges with an inflexible economy and struggles to adapt to the changing price of oil.

The Dutch Disease is a term that explains this reliance on a dominant item. 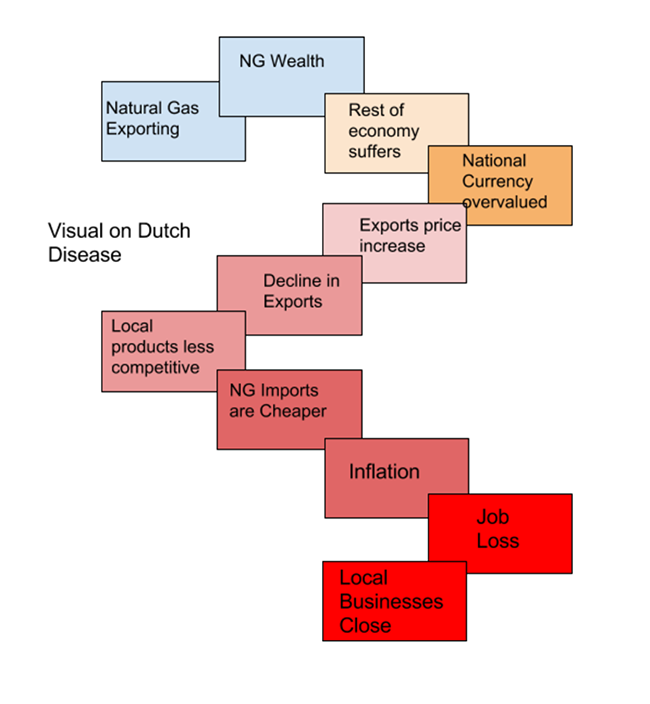 The Process of the Dutch Disease
Click for a text description of the figure
Flow Chart: Natural Gas exporting leads  Natural Gas Wealth leads to The Rest of the economy suffering leads to National Currency overvalued leads to export prices increase leads to a decline in exports leads to local products are less competitive leads to natural gas imports are cheaper leads to inflation to job loss leads to local business closure.
Credit: The Process of the Dutch Disease by K. Jensen © Penn State is licensed under CC BY-NC-SA 4.0

For more economic details of “Dutch Disease” review this supplemental video. (not required to watch)

PRESENTER: Now let's consider a phenomenon sometimes known as the Dutch disease. The so-called Dutch disease arises when a country has an export whose performance on world markets is so strong that it raises the real exchange rate of that country and makes it harder for that country to export other goods and services. It's called the Dutch disease because at least supposedly, the Dutch suffered from this problem starting in the 1960s after a major discovery of natural gas there.

Of course, one significant question is whether a real exchange rate appreciation should be thought of as a disease at all. After all, on the surface, it sounds like it might be a good thing to have a really strong exporting sector. But of course, this high real exchange rate will make it harder for that country to export say, agriculture, or it may make it harder for that country to ever become an exporter of automobiles. So there is some trade off here. But again, if you think about is that a problem, imagine we looked at a basketball player, and we saw that the earnings of that individual playing basketball were so high, it wouldn't possibly make sense for that individual to go around say, trying to sell rice. It would again, seem that this isn't really a disease at all.

So how can we make sense of this Dutch disease argument? Well, one possibility is that it's suggesting at least implicitly, that these economies are not becoming sufficiently diversified, that they're putting too many of their eggs in one basket by relying so much on the one single strong commodity doing well in world markets. Another possible problem is that the export success of a single major commodity leads to a problem with the income distribution. Perhaps it's a natural resource owned by a relatively small number of individuals or by a government, and that this is not spreading into a more general, middle class prosperity. In this regard, the Dutch disease argument may have a cross section with some other arguments on the so-called resource curse, which we consider in another video. And the problem there is that so much free cash flows in through the form of owning a resource that it can make a government corrupt and again, lead to generally bad political incentives.

The original citation of the Dutch disease states from the 1960s. But if you're looking for a potential case today where there is a Dutch disease, well, maybe that would be Canada according to some commentators. So Canada has done very well lately exporting natural resources. But it's also lost a good deal of its manufacturing base. Some people have argued that this is leaving the Canadian economy insufficiently diversified, or with a sub-optimal distribution of wealth, because trading in manufacturing prosperity for natural resource prosperity does have some real implications over the longer run. To read more on all these topics of course, Google the term Dutch disease in varying ways, and see also our closely related videos on the resource curse on Bela Balassa, and also on comparative advantage.

The discussion continues on the Petro State with a focus on the broad view of what governments do with all the new income from the exporting Natural Resource. Governments get used to a specific level of income from oil exports. They set budgets, create or expand welfare programs, and increase subsidies. Then the price drops, and what once was a Midas Golden Touch becomes a commitment that the government cannot fulfill. Governments are locked into this increased spending, and The Gold becomes straw.

The dependence on oil exports creates an environment of corruption, Inflation, and “Dutch Disease.” The persistent responsibility of the Petro State government.

My personal example is when I used to get a raise - YAY! seems like such a boost in my personal economy, but then 2 months into the raise, and I am more in debt than I was before. What happened?!? Learn from the Petro State, and save not spend!

‹ Lesson 4 Chapter 12 Video up The Lecture for The Prize Chapter 13: The Flood ›
EGEE 120 Oil: International Evolution