Hemicellulases work on the hemicellulose polymer backbone and are similar to endoglucanases. Because of the side chain, “accessory enzymes” are included for side-chain activities. An example of hemicellulase activity on arabinoxylan and the places where bonds are broken by enzymes are shown (blue) in Figure 6.19. Figure 6.20 shows another example of how hemicellulose breaks down hemicellulose, a complex mixture of enzymes in order to degrade hemicellulose. The example depicted is cross-linked glucurono arabinoxylan.

The complex composition and structure of hemicellulose require multiple enzymes to break down the polymer into sugar monomers—primarily xylose, but other pentose and hexose sugars also are present in hemicelluloses. A variety of debranching enzymes (red) act on diverse side chains hanging off the xylan backbone (blue). These debranching enzymes include arabinofuranosidase, feruloyl esterase, acetylxylan esterase, and alpha-glucuronidase [Table 6.4 shows enzyme families for degrading the hemicellulose]...As the side chains are released, the xylan backbone is exposed and made more accessible to cleavage by xylanase. Beta-xylosidase cleaves xylobiose into two xylose monomers; this enzyme also can release xylose from the end of the xylan backbone or a xylo-oligosaccharide. (U.S. DOE, 2006)

Figure 6.19: Example of hemicellulase activity on arabinoxylan, showing bonds that are broken. The hemicellulases are shown in blue.
Credit: U.S. DOE. 2006. Breaking the Biologic Barriers to Cellulosic Ethanol 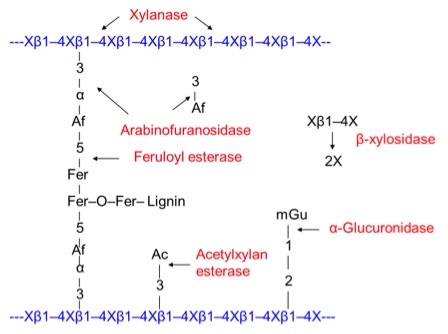 Figure 6.20: Complex mixture of enzymes for degrading hemicelluloses. Instead of using chemical structures, this example uses abbreviations for different parts of the glucurono arabinoxylan so the connections can be observed more easily. The backbone is shown in blue, while the hemicellulases are shown in red.
Credit: U.S. DOE. 2006. Breaking the Biologic Barriers to Cellulosic Ethanol

Lignin-degrading enzymes are different from hemicellulases and cellulases. They are known as a group as oxidoreductases. Lignin degradation is an enzyme-mediated oxidation, involving the initial transfer of single electrons to the intact lignin (this would be a type of redox reaction or reduction-oxidation reaction). Electrons are transferred to other parts of the molecule in uncontrolled chain reactions, leading to the breakdown of the polymer. It is different from the carbohydrate hydrolysis because it is an oxidation reaction, and it requires oxidizing power (e.g., hydrogen peroxide, H2O2) to break the lignin down. In general, it is a significantly slower reaction than the hydrolysis of carbohydrates.

Examples of lignin-degrading enzymes include lignin peroxidase (aka ligninase), manganese peroxidase and laccase, which contain metal ions involved in the electron transfer. Lignin peroxidase (previously known as ligninase) is an iron-containing enzyme, which accepts two electrons from hydrogen peroxide (H2O2), then passes them as single electrons to the lignin molecule. Manganese peroxidase acts in a similar way to lignin peroxidase but oxidizes manganese (from H2O2) as an intermediate in the transfer of electrons to lignin. Laccase is a phenol oxidase, which directly oxidizes the lignin molecule (contains copper). There are also several hydrogen-peroxide generating enzymes (e.g., glucose oxidase), which generate H2O2 from glucose. (The Microbial World website)

If you are interested in learning about mechanisms of these enzymes, then visit this website from the Department of Chemistry, University of Maine. There are several pages that discuss how each of the different types of enzymes works mechanistically.

Lesson 7 will discuss the process of ethanol production after the use of cellulases on cellulose.

‹ 6.3b Composition of Enzymes up 6.4 Assignments ›
EGEE 439: Alternative Fuels from Biomass Sources