Fat is a generic term for lipids, a class of compounds in biochemistry. You would know them as greasy, solid materials found in animal tissues and in some plants – oils that are solids at room temperature.

Vegetable oil is the fat extracted from plant sources. We may be able to extract oil from other parts of a plant, but seeds are the main source of vegetable oil. Typically, vegetable oils are used in cooking and for industrial uses. Compared to water, oils and fats have a much higher boiling point. However, there are some plant oils that are not good for human consumption, as the oils from these types of seeds would require additional processing to remove unpleasant flavors or even toxic chemicals. These include rapeseed and cottonseed oil.

Animal fats come from different animals. Tallow is beef fat and lard is pork fat. There is also chicken fat, blubber (from whales), cod liver oil, and ghee (which is a butter fat). Animal fats tend to have more free fatty acids than vegetable oils do.

Chemically, fats and oils are also called “triglycerides.” They are esters of glycerol, with a varying blend of fatty acids. Figure 9.1 shows a generic diagram of the structure without using chemical formulas. 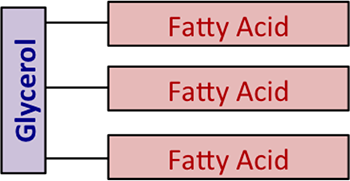 Figure 9.1: A generic diagram of oils and fats; a free fatty acid is when the fatty acid separates from the glycerol.
Credit: BEEMS Module B4

So what is glycerol? It is also known as glycerin/glycerine. Other names for glycerol include: 1,2,3-propane-triol, 1,2,3-tri-hydroxy-propane, glyceritol, and glycyl alcohol. It is a colorless, odorless, hygroscopic (i.e., will attract water), and sweet tasting viscous liquid. Figure 9.2 shows the chemical structure in two different forms.

Figure 9.3b shows different fatty acid chemical structures. The chemical structures are shown in line chemical structures, where each point on the links is a carbon atom and the correct number of hydrogen atoms is dependent on whether there is a single or double bond. Fatty acids can be saturated (with hydrogen bonds) or unsaturated (with some double bonds between carbon atoms). Because of the metabolism of oilseed crops, naturally formed fatty acids contain even numbers of carbon atoms. In organic chemistry, carbon atoms have four pairs of electrons available to share with another carbon, hydrogen, or oxygen atom. Free fatty acids are not bound to glycerol or other molecules. They can be formed from breakdown or hydrolysis of a triglyceride.

Figure 9.3b: Other long chain acids, such as steric, palmitic, oleic, and linoleic acids.
Credit: BEEMS Module B4

The fatty acids shown have slightly different properties. Palmitic acid is found in palm oil. Figure 9.4 shows the relationship of each fatty acid to its size and saturation. Palmitic and steric acids are saturated fatty acids, while oleic and linoleic acids are unsaturated with different amounts of double bonds. Figure 9.4 shows differing amounts of carbon atoms compared to the number of double bonds in the compound. 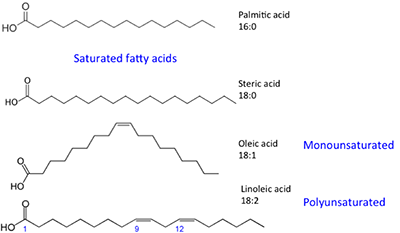 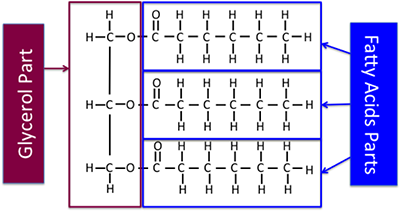 So, we’ve discussed what fats and oils are. Now, what is biodiesel? What is at least one definition? It is a diesel fuel that was generated from biomass. However, there are different types of biodiesel. The most commonly known type of biodiesel is a fuel comprised of mono alkyl esters (typically methyl or ethyl esters) of long chain fatty acids derived from vegetable oils or animal fats – this is according to ASTM D6551. An ASTM is a document that contains the standards for particular types of chemicals, particularly industrial materials. This is a wordy definition that doesn’t really show us what it is chemically.

So when we talk about an alkyl group, it is a univalent radical containing only carbon and hydrogen atoms in a hydrocarbon chain, with a general atomic formula of CnH2n+1. Examples include: 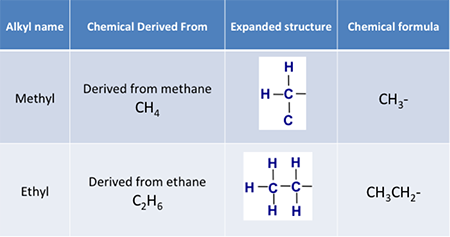 Another term we need to know about is ester. Esters are organic compounds where an alkyl group replaces a hydrogen atom in a carboxylic acid. For example, if the acid is acetic acid and the alkyl group is the methyl group, the resulting ester is called methyl acetate. The reaction of acetic acid with methanol will form methyl acetate and water; the reaction is shown below in Figure 9.6. An ester formed in this method is a condensation reaction; it is also known as esterification. These esters are also called carboxylate esters.

This is the basic reaction that helps to form biodiesel. Figure 9.7 shows the different parts of the chemical structure of the biodiesel, the methyl ester fatty acid, or fatty acid methyl ester (FAME).

So, at this point, let’s make sure we know what we have been discussing. Biodiesel is a methyl (or ethyl) ester of a fatty acid. It is made from vegetable oil, but it is not vegetable oil. If we have 100% biodiesel, it is known as B100 – it is a vegetable oil that has been transesterified to make biodiesel. It must meet ASTM biodiesel standards to qualify for warranties and sell as biodiesel and qualify for any tax credits. Most often, it is blended with petroleum-based diesel. If is B2, it has 2% biodiesel and 98% petroleum-based diesel. Other blends include: B5 (5% biodiesel), B20 (20% biodiesel), and B100 (100% biodiesel). We’ll discuss why blends are used in a following section. And to be clear: sometimes vegetable oil is used in diesel engines, but it can cause performance problems and deteriorate engines over time. Sometimes, vegetable oil and alcohols are mixed together in emulsions, but that it is still not a biodiesel, as it has different properties from biodiesel.

So, if straight vegetable oil (SVO) will run in a diesel engine, why not use it? Vegetable oil is significantly more viscous (gooey is a non-technical term) and has more poor combustion properties. It can cause: carbon deposits, poor lubrication within the engine, and engine wear, and it has cold starting problems. Vegetable oils have natural gums that can cause plugging in filters and fuel injectors. And for a diesel engine, the injection timing is thrown off and can cause engine knocking. There are ways to mitigate these issues, which include: 1) blend with petroleum-based diesel (usually < 20%), 2) preheat the oil, 3) make microemulsions with alcohols, 4) “crack” the vegetable oil, and 5) use the method of converting SVO into biodiesel using transesterification. Other methods are used as well, but for now, we’ll focus on biodiesel from transesterification. Table 9.1 shows three properties of No. 2 diesel, biodiesel, and vegetable oil. As you can see, the main change is in the viscosity. No. 2 diesel and biodiesel have viscosities that are similar, but vegetable oils have much viscosity and can cause major problems in cold weather. This is the main reason for converting the SVO into biodiesel.