The following video is produced by Los Alamos National Laboratory in New Mexico. The video provides a nice overview of how algae are generated, how to harvest them, and the areas of research LANL are focusing on to improve various aspects of the process to make it more economical (3:12).

RICHARD SAYRE: The upside of renewable fuels is that they're sustainable. They reduce the environmental impact, and they can help potentially mitigate climate change. We particularly like algae as biomass or bio fuel feedstock. Algae grow about two to 10 times faster than the best terrestrial crop plants.

They often will store oils as a energy reserve product. And oils that come out of these algae, we've found can be directly converted into fuels, using preexisting technologies.

JOSE OLIVARES: So the laboratory is interested in this area because we have a mission around energy security, providing new technologies for energy for the nation. The big problem, the big challenge is how to get that whole process to be economically and energetically efficient.

RICHARD SAYRE: To make algal biofuels economically viable, there are two very important factors that we have to improve, and that's the biomass productivity per unit land area or the yield. And the other very important factor that we need to improve is reducing the costs of harvesting the algae from the pond.

JOSE OLIVARES: The laboratory is actually developing some nice technologies in a number of different areas, transforming the algae so that it can produce more lipids, more biomass, overall better productivity, under better conditions.

PETER LAMMERS: You've seen how we transfer the algae from the lab from, colonies on a Petri dish to larger cultures. We bring them out here, adapt them to the outdoors and the sunshine. We begin to scale them up. Pretty soon, we'll have algae at hundreds of acres, if not thousands of acres.

RICHARD SAYRE: Another important concern is water, how much water are we going to use. And to address those issues, we're now focusing on developing heat tolerant strains of algae that can be grown in ponds that are covered with plastic to reduce the evaporation. We've figured out how to engineer algae so they can use light more efficiently than normal algae do. We've seen up to a two-fold increase in growth.

We've also figured out how to engineer algae to make more oil. So at the time that we want to harvest the algae, we'll induce the expression of a gene that will cause all of the algae to stick to each other, settle out of the pond and then we pick them up. Maybe the last reason why we like algae is that we can recycle the nutrients that are in waste waters.

PETER LAMMERS: Algae can do wastewater treatment better than conventional systems. So why not take an energy intensive expensive process and turn it into a energy generating system where you're getting clean water and liquid fuels as your two products, and do that in a way that generates revenue rather than consumes revenue.

Algae are typically in a dilute concentration in water, and biomass recovery from a dilute medium accounts for 20-30% of the total production cost. Algae can be harvested using: 1) sedimentation (gravity settling), 2) membrane separation (micro/ultra filtration), 3) flocculation, 4) flotation, and 5) centrifugation.

Sedimentation is the initial phase of separating the algae from water. Once agitation is completed, the algae are allowed to settle and densify. However, other methods most likely will also be required to achieve complete separation.

Membrane separation is a form of filtration. In the lab, a funnel is attached to a vacuum flask. The contents are poured out onto the filter on the funnel and allowed to dry some on the filter as the vacuum continues to be pulled. This method can be used to collect microalgae with low density, but is typically done on a small scale. But the main disadvantage is membrane fouling. There are three modifications: 1) reverse-flow vacuum, 2) direct vacuum with stirring blade above the filter, and 3) belt compression.

Flocculation is another technique. Flocculation is a method where something is added to the mixture of water and algae that causes the algae to “clump” together (or aggregate) and form colloids. Chemical flocculants include alum and ferric chloride. Chitosan is a biological flocculant, but has a fairly high cost. Autoflocculation is an introduction of CO2 to an algal system to cause algae to flocculate on their own. Often flocculation is used in combination with a filter compressor as described in the last paragraph.

Froth floatation is another method for harvesting and separating algae from water. This is a technique that has been used in coal and ore cleaning technology for many years. It is based on density differences in materials. Typically air bubbles are incorporated into the unit. Sometimes an additional organic chemical or adjustment of pH will enhance separation. For algal systems, the algae will accumulate with the froth of bubbles at the top, and there is some way to collect or scrape the froth and algae from the top to separate it from the water. It is an expensive technology that, at this point, may be too expensive to use commercially. There is also the possibility of combining froth flotation with flocculation. For example, when alum is used as a flocculant for the algae, air is bubbled through to separate the flocculant by density. It can also be combined with a filter compressor.

Along with these separation techniques, moisture needs to be removed from algae to improve the shelf-life. Algae are concentrated from water through a series of processes, including the separation process. The concentration of algae in the pond starts at about 0.10-0.15% (v/v). After flocculation and settling, the concentration is increased to 0.7%. Using a belt filter process, the concentration increases to 2% (v/v). Drying algae from 2% to 50% v/v requires almost 60% of the energy content of the algae, which is a costly factor of algae use.

This is an important aspect to the use of algae to generate fuels. It is likely also an expensive option. The algae cells have to be subjected to cell disruption for the release of the desired products. Physical methods include: 1) mechanical disruption (i.e., bead mills), 2) electric fields, 3) sonication, 4) osmotic shock, and 5) expeller press. There are also chemical and biological methods, including: 1) solvent extraction (single solvent, co-solvent, and direct reaction by transesterification), 2) supercritical fluids, and 3) enzymatic extraction.

Single solvent extraction is one of the more common methods. A solvent that is chemically similar to the lipids is used, such as hexane or petroleum ether (this is just a light petroleum-based solvent). This is a commercial process. Extraction takes place at elevated temperatures and pressure. Advantages include an increased rate of mass transfer and solvent accessibility and a reduced dielectric constant of immiscible solvent. The use of a co-solvent process is a little different. There are two criteria used to select a co-solvent. Selection should include: 1) a more polar co-solvent that disrupts the algae cell membrane, and 2) a second less polar co-solvent to better match the polarity of the lipids being extracted (alkanes can meet this criteria). There are several examples of co-solvent extraction. One method was developed by Bligh and Dyer in 1959. Alcohol and chloroform are the solvents, and the majority of the lipids dissolve into the chloroform phase. The interactions include water/methanol > methanol/chloroform > lipid/chloroform. Other combinations of co-solvents include: 1) hexane/isopropanol, 2) dimethyl sulfoxide (DMSO)/petroleum ether, and 3) hexane/ethanol.

Supercritical extraction is similar to solvent extraction. The main difference is that the solvent is maintained until certain pressure and temperature conditions are met, which change the solvent properties and helps extract the materials. It is often done on a smaller scale and may not be useful at an industrial level.

Enzymatic extraction is also similar to solvent extraction, except instead of a solvent, an enzyme is used to separate the materials.

As discussed in the biodiesel lesson (Lesson 9), the reaction of transesterification is often used to convert lipids into fatty ester methyl esters (FAMEs) using alcohol and a catalyst. The advantages of using this method are the high recovery of volatile medium chain triglycerides, and the fact that antioxidants are not necessary to protect unsaturated lipids. There are other methods as well, as discussed near the end of the biodiesel lesson.

Besides separating out the lipids to make diesel fuel, other fuels can be obtained from algae directly. These include alcohols such as ethanol and butanol, hydrogen, and methane.

Alcohols can be made from algae by heterotrophic (carbon nutrients from organic materials) fermentation of starch to alcohols, including ethanol and butanol. Marine algae used for this are Chlorella vulgaris and Chlamydomonas perigramulata. Procedures include starch accumulation via photosynthesis, subsequent anaerobic fermentation under dark conditions to produce alcohol, and alcohol extracted directly from the algal culture media. Hydrogen can also be produced directly from algae through photofermentation and dark fermentation. Methane can be produced by anaerobic conversion of algae. It can be coupled with other processes (using the residue after lipids are removed, for example). Challenges include high protein content of biomass, which can result in NH3 inhibition and can be overcome by co-digestion with high carbon co-substrates. Figure 10.12 shows a schematic of different processes to convert algae, and the range of fuel products that can be made. 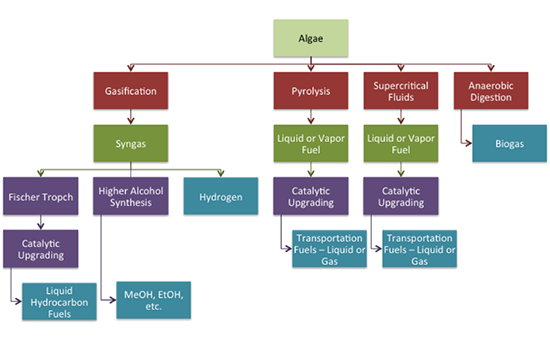 Figure 10.12: Fuel products from various processes of algae.
Click here for a text alternative to Figure 10.12