One of the major feedstocks for biodiesel is soy oil or any other vegetable oil. Animal fats can also be used, but as pointed out in a previous lesson, animal fats can produce more by-products that cause issues (i.e., free fatty acids which can cause soap formation). Jatropha is another oil used for biodiesel production. Second-generation biodiesel can be produced from algae, and use of algae for biodiesel production is a growing market (Figure 11.8). The feedstock is the primary cost involved in producing biofuel. Haas et al (2006) estimate that the cost of oil is ~ 85% of the production costs, while Duncan (2003) estimates it to be ~80% of the production costs.

Figures 11.9a and 11.9b show the challenges of the economics behind biodiesel production. Figure 11.9a shows the breakeven price of biodiesel plotted with the actual biodiesel price. Most years, the biodiesel price and breakeven price were the same. But in 2011 and 2013, the biodiesel sold at a higher price than the breakeven price, a good indicator for demand. In Figure 11.9b, we can see that in most years, the ULSD price was lower than biodiesel, by ~$1 per gallon, but in late 2013 and 2014, the price was almost the same and the margin between the two were much closer. Again, this suggests a greater demand for biodiesel as well as the costs becoming closer to the processing of petrodiesel. 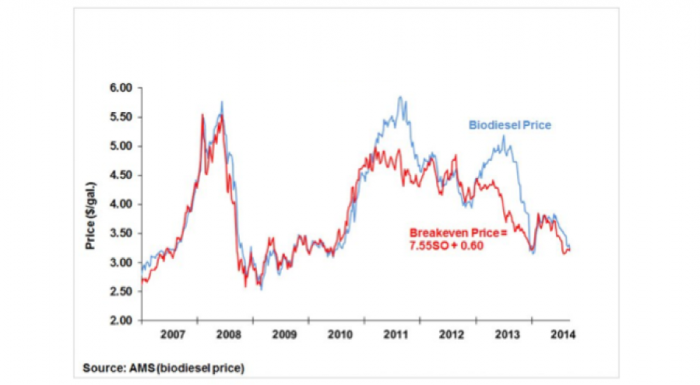 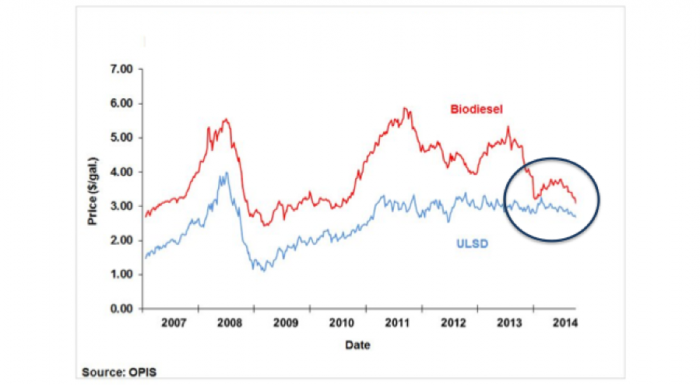 Most of the information we are looking at is based on soy oil production, but as we have discussed in Lessons 9 and 10, biodiesel can be produced in ways other than transesterification and can be produced from other sources, such as algae. The reason for producing biodiesel using other methods would be to reduce the oxygenates from the biodiesel, mainly so the biodiesel could be used as jet fuel, as jet fuel cannot have oxygenates in it. The reason behind using algae is because of the advantages of 1) using land areas that would not be able to grow terrestrial plants, 2) the ability of algae to produce much greater amounts of oil per landmass than plants like soy, and 3) algae plants take in much greater amounts of CO2 and could be located near a power plant to utilize emissions from the flue gases. However, as you will see from data in the following tables, the costs of oil from algae are still fairly high. One of the useful aspects of growing algae is it can be grown in water sources that can contain salt or some sediment - even though water usage may be high, some of the water may be separated out and used again.

The following data is from an overview review article on producing biodiesel from algae, from 2007. In Table 11.3, Chisti compared the production of biodiesel from PBR and an open raceway pond, to show differences in production.

a Based on facility area.

b Based on actual pond area.

c Based on projected area of photobioreactor tubes.

As you can see, the PBR can produce more oil for a number of reasons, but costs associated with the PBR are higher. Chisti estimates the cost to produce algae oil on a scale of 10,000 tons at $0.95 per pound. This particular article estimated that the cost of producing biodiesel from algae would range from $10.60 – $11.13 per gallon. The processing costs for palm oil would be ~$0.53 per gallon, and the processing costs for soybean oil would be $3.48 per gallon. A slightly more recent report, a project to estimate the price of biodiesel, indicates prices from $10.66 per gallon to as high as $19.16 depending on location and oil production. (Davis, R., et al., 2012) Yet another computer-simulated estimate provided by Richardson et al. shows a cost to produce algal oil at $0.25 - $1.61 per pound, not too far off of costs to produce soybean oil ($0.35 - $0.38 per pound) (Richardson et al., 2010). They also estimated the cost of biodiesel from algae oil to be $2.35 per gallon, less than a gallon of ULSD. However, they may not be including algae harvesting costs in this estimate.

So, you can see that biodiesel from microalgae is a long way off from being a reality, yet it probably has a future if the costs can be brought down due to benefits.

So, how does biodiesel compare to ethanol as a fuel? Ethanol from corn has become big business here in the US. Figure 11.10a shows the production by county and plant locations for ethanol production from corn. We saw earlier in the lesson that ethanol from corn has a NEB ratio greater than 1 and is improving, and that production of ethanol from corn is the least expensive here in the US. The amount of ethanol produced in 2014 was 13 billion gallons per year and is a $30 billion a year industry. It makes up 10% of the gasoline pool, although the government has mandated that the gasoline pool can utilize up to 10% ethanol, and companies get tax credits for using ethanol. Because of the high price of gasoline due to oil prices, demand for gasoline fell, and this has made it more difficult for ethanol producers to continue selling ethanol at the level that they had over the last several years. Recently, the EPA examined whether to raise the ethanol limit to 15%, but because of the drop in oil prices, the EPA has been reconsidering this and has not set levels for 2015. In the assignment section, you will read an article related to this so you can get a feel for what is facing the biofuels industry. Remember that by including ethanol in the gasoline pool, we reduce GHG emissions.

Figure 11.10b shows the location of biodiesel facilities in the US from 2007. If you would like to view a more recent map and location of facilities (2015), go to Biodiesel Magazine. According to the most recent statistics, there are 145 biodiesel facilities in the US that provide more than 2.60 billion gallons of biodiesel per year (in 2010, the production of biodiesel was less than 0.4 billion gallons per year, which is an order of magnitude increase). Biodiesel makes up about 5-6% of the diesel fuel pool. Biodiesel plants tend to be smaller and more evenly distributed across the US than ethanol. You will also read an article related to biodiesel pricing. RIN means renewable identification number and RFS stands for renewable fuel standard.

Figure 11.10a: Ethanol production from corn: Production by county and location of plants 2012.
Credit: Virginiaplaces