Not much has been made here of long-term contracts for oil. This is because up until the early 1980s there were not very many. Production continued as long as the extracted oil could find a home in the spot market. The oil-producing countries, recognizing their market power, either implicitly or explicitly avoided long-term contracts in pursuit of volatile and largely lucrative spot prices.

Following the oil crisis of 1979, the market seemed to have had enough of OPEC's games. Non-OPEC crude production increased as new fields were opened up in Alaska and the U.K., where there was a healthy forward market for Brent crude oil. The New York Mercantile Exchange (NYMEX) officially opened its doors to oil trading in 1983, although the exchange had started selling product futures some years before. Forward markets arose because while the spot market was good for the OPEC governments, it was lousy for oil companies, refiners and other government buyers. Although the number of these buyers was still relatively small, they needed a way to hedge the spot market, and traders were the means to this end.

We have already explained the difference between spot markets and forward markets. Both are "physical" markets, in that their main purpose is to exchange commodities between willing buyers and sellers. A spot or forward transaction typically involves the exchange of money for a physical commodity. Within the past few decades, entities with sufficiently large exposure in the physical market (i.e., the need to buy or sell lots of physical barrels of crude oil) have developed financial instruments that can help them "hedge" or control price volatility. By far the most important of these financial instruments is the "futures" contract.

This simple example illustrates the primary usefulness of futures contracts, which is hedging against future fluctuations in the spot price. A hedge can be thought of as an insurance policy that partially protects against large swings in the crude oil price.

NYMEX (now called the "CME Group") provides a platform for buying and selling crude oil contracts from one month in advance up to eight and a half years forward. The time series of futures prices on a given date is called the "forward curve," and represents the best expectations of the market (on a specific date) as to where the market will go. Figure 1.5 shows an example of the "forward curve" for crude oil traded on the NYMEX platform. The value of these expectations, naturally, depends on the number of market participants or "liquidity." For example, on a typical day there are many thousands of crude oil futures contracts traded for delivery or settlement one month in advance. On the other hand, there may be only a few (if any) futures contracts traded for delivery or settlement eight years in advance.

There is a wealth of data out there on crude oil markets. The following two videos will help orient you towards two websites where you can find information on crude oil prices, demand, shipments and other data. The first covers the NYMEX crude oil futures contract and the second covers the section on crude oil from the U.S. Energy Information Administration. Although these are U.S. websites, there is a good amount of data on global markets.

Video explaining how to find NYMEX information on energy futures contracts.
Click for a transcript of NYMEX Oil video.

SPEAKER 1: So, most energy commodities, most energy futures contracts, are traded through exchanges run by this company called the CME Group. And part of the CME Group used to be called NYMEX, or the New York Mercantile Exchange, which was the original trading platform for crude oil and natural gas futures contracts. So, to find information on energy futures contracts, and in this video I'm going to show you where to find information on the crude oil contract in particular, you would go to the CME Group's website, which is just cmegroup.com. You can also type in www.nymex.com, and it will send you over to the same website. So, at the very top, you would go to the Products and Trading section. And then, when you click on the arrow, you'll see a link to Energy contracts. And once it pops up, you'll see a list of different types of energy contracts traded through the CME Group's exchanges. For crude oil futures, the code name for that is CL. So, you'd find CL, and then click on Crude Oil Futures, and it'll take you to all sorts of information about the crude oil futures contract.

So, all of the text on this page basically tells you all of the details about the crude oil futures contract. So, what exactly it means to trade a futures contract for crude oil. If you want to see prices, then you would go back up to the top. And there's a link here that says Quotes. So, you'd click on that. And then, sometimes, it takes a second to populate. And once it does, you can see the entire forward curve for crude oil at the particular moment that you've clicked on the link. And so, for example, crude oil trading for delivery in September 2013 was trading at $105.49, for October $105.45, and so on, and so forth. So, the forward curve progresses forward monthly for a number of years. And then, at some point, transitions to biannually, or then annually going out about eight years.

Video explaining how to navigate the US Energy Information Administration site.
Click for a transcript of EIA Oil video.

So, here what I'm going to do is introduce you to the EIA webpage in general and point out where to find information about crude oil and refined petroleum products. So, the EIA homepage is www.eia.gov, and when you go there you'll see several things. One is that they have a sort of rotating list of stories some of which you may find interesting. They have some specific data highlights for electricity or natural gas or oil, but if you're looking for something specific, generally the best place to start is this button at the top that says sources and uses. Once you click on that, you'll see basically all the information on the EIA website that is organized by energy source.

So, you have petroleum, coal, natural gas, electricity, and some others. So, for this I'm going to click on the petroleum and other liquids button and that will take you to the petroleum home page at the EIA where again they have some sort of rotating cover stories, and they also have some brief articles that that may be of interest and links to some of the EIA regular publications that are relevant to crude oil and refined petroleum products. If you really know what you're looking for, once you get to the petroleum home page the best place to go is this tab that says data. So, here, I'll click on that and from the data tab you can see the data that the EIA has on oil and petroleum products organized into several different categories. So, high level data, so things like national crude oil prices, national level crude oil production supply, are in this summary tab prices for crude oil and petroleum products are in the prices tab there are a lot of these.

You have reserves information on refining imports and exports and shipments between different parts of the United States and then a consumption data is a little, you have to look at this with a little bit of care, because when somebody sells oil or petroleum product to somebody else the seller doesn't actually know what the buyer is doing with it and so there's a difference between sales and consumption. So for example, when I put 10 gallons of gasoline in my tank, right, then what I'm basically doing is I'm buying gasoline, but I'm not using it at the same second that I bought it, and they use those 10 gallons within a week or if I don't drive very much it may take me months to use those ten gallons of gasoline. So, the EIA is very careful to talk about sales, so these would be sales on the wholesale or retail level. So, for example, sales of fuel oil and kerosene or terms that they call disposition or product supplied and what they mean by disposition and product supplied is simply the movement of crude oil from petroleum products from us for example, storage facilities, to retailing facilities or are retailing facilities to end use consumers. 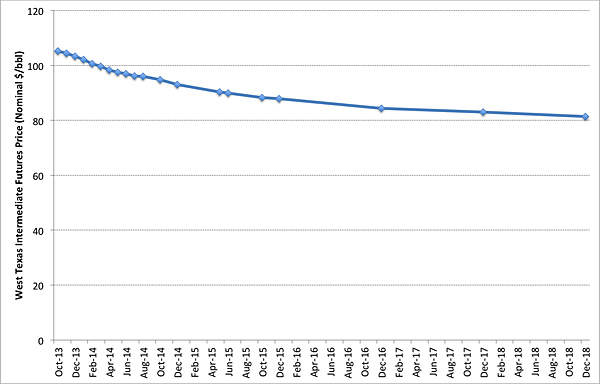 If you look at Figure 1.5, you might notice that the price of crude oil generally declines as you move farther out into the future. This is called "backwardation." The opposite, in which the price of crude oil increases as you move farther out into the future, is called "contango." In general, we expect the crude oil market to be in backwardation most of the time; that is, we expect the future price to be lower than the current (spot) price. This can be true even if we expect demand for crude oil to increase in the future. Why would this be the case? If demand is expected to rise in the future, shouldn't that bring the market into contango?

Sometimes this does happen. Most often, the crude oil market is in backwardation because storing crude oil generally involves low costs and has some inherent value. Suppose you had a barrel of crude oil. You could sell it now, or store it to sell later (maybe the price will be higher). The benefit to storing the barrel of oil is the option to sell it at some future date, or keep on holding on to the barrel. This benefit is known as the "convenience yield." Now, suppose that hundreds of thousands of people were storing barrels of oil to sell one year from now. When one year comes, all those barrels of oil will flood the market, lowering the price (a barrel in the future is also worth less than a barrel today; a process called discounting that we will discuss in a later lesson). Thus, because inventories of crude oil are high, the market expects the price to fall in the future.

The ability to store oil implies that future events can impact spot prices. A known future supply disruption (such as the shuttering of an oil refinery for maintenance) will certainly impact the futures price for oil, but should also impact the spot price as inventories are built up or drawn down ahead of the refinery outage.

‹ Current World Oil Market up Are we running out of oil? ›
EME 801: Energy Markets, Policy, and Regulation