Are we running out of oil?

Are we running out of oil?

Our transportation systems are highly dependent on petroleum. High and volatile prices for oil (and at the pump) naturally give rise to suggestions that oil production has peaked, or that we are running out of oil. Concern over oil supplies is not new. Looking back over the past hundred years, there have been five or six projections from governments, researchers and other groups suggesting that the world was about to run out of oil, precious metals or other valuable commodities.

The reality of the "amount of oil" is more complex. When Hubbert made his predictions in the 1950s, the oil industry was still in its technical infancy. Most oil production came from so-called "elephant" oil fields, tremendously large reservoirs of easily-accessible oil. To imagine what these "elephant" fields were like, think about the theme song to the Beverly Hillbillies, when Jed Clampett shoots a hole in the ground and oil comes spouting up. The elephant oil fields that represented most oil production during Hubbert's time were basically like "Jed Clampett oil." What Hubbert was predicting was really the decline in Jed Clampett oil.

While Hubbert was right about Jed Clampett oil, his analysis did not consider the advances in technology that would make extraction of oil possible from less-accessible reservoirs. Nor did he consider that a rise in the price of oil would make oil extraction from so-called "unconventional" reservoirs profitable enough to undertake. Deepwater drilling (like in the Gulf of Mexico), the Canadian oil sands, and even extraction of oil from shales via hydraulic fracturing in North Dakota are all examples of unconventional oil production.

In fact, most geologists now believe that the amount of unconventional oil is much larger than all of the Jed Clampett oil fields put together. A recent study from University of California at Berkeley ("Risks of the Oil Transition" by Adam Brandt and Alex Farrell, Environmental Research Letters 2006) estimated that the world has used up only about 5% of known technically recoverable oil reserves. A future supply curve for liquid hydrocarbons (crude oil and usable synthetic liquid fuels), as shown in Figure 1.6 and adapted from the Brandt/Farrell paper, demonstrates this shift from "conventional" resources (i.e., Jed Clampett oil) to unconventional resources. These unconventional resources include the oil sands for which Alberta is now well known; bitumen-laden "heavy oils" (for which Venezuela is also known); enhanced oil recovery from conventional wells (EOR); synthetic fuels manufactured using natural gas or coal as a feedstock; and oil shales, which includes both naturally occurring deposits of oil in low-porosity shale formations (typically requiring hydraulic fracturing to extract) and hydrocarbon-rich shales that are used to produce a synthetic crude oil. 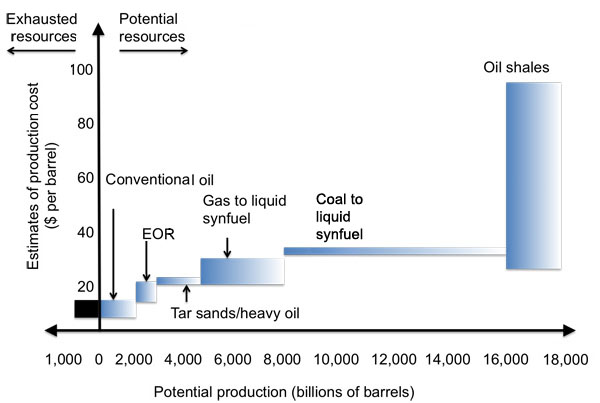 The reality is not that we are "running out of oil," but rather that we are transitioning from a period of easily-accessible oil at low prices to an era of increasingly unconventional production, which has higher costs. Companies will not try to develop these unconventional resources unless consumers are willing to pay the price (economic and environmental) or governments heavily subsidize oil production or consumption. So far, the world has found a way to consume plenty of $100 per barrel oil. At some point, unconventional oil exploration will get so expensive that consumers will look to lower-cost alternatives. Oil will price itself out of the market before the world truly runs out. The increasing popularity of hybrid vehicles, electric vehicles, bicycle transportation in urban areas and even natural gas vehicles are examples of such a shift, even if government policies are required to affect the decisions that consumers make.

Sheik Ahmed Zahi Yamani, the longtime Saudi oil minister and a key founder of OPEC, has perhaps summed up the world oil market the most nicely. He said, "The Stone Age came to an end, not for lack of stones, and the oil age will end, but not for lack of oil."