Types of Subsidies and Incentive Programs

Types of Subsidies and Incentive Programs

Before you get too deeply into this lesson, have a look at the Glossary page from the DSIRE website. Focus on the first section of the page, which defines a number of types of financial incentives. The definitions here aren't too in-depth, but reviewing them will get you familiar with the language of different types of incentives. If you are interested, the section of the page on "Rules, Regulations and Policies" is also worth a look to give you some appreciation for the truly dizzying array of ways that governments at various levels (state, federal, and local) are trying to encourage the use of renewable energy resources, particularly for the production of electricity.

In general, DSIRE is a very good resource for learning about renewable energy and energy-efficiency incentives in the United States. The following video provides a quick tour of some of the most useful information on the DSIRE website. (Note: as of this writing the DSIRE website was undergoing some major revisions, but the structure of the web site itself does not appear to have changed that much. It is worth some time wandering around that website to see what information is available.)

PRESENTER: The Database of State Incentives for Renewables & Efficiency is one of the most useful online resources for information about incentives and subsidies available to renewable energy and energy efficiency in the United States. And it is limited to the US. But it's probably one of the best centralized locations for this information on the web. And so, the website is www.dsireusa.org. Or if you just go to Google and type in DSIRE, you'll probably find it. So, when you go to the Home page, the first thing that you will see is this map of the United States. And each of the states and territories within the US is clickable to get more information about incentives available in that state. So, for example, I'm going to click on my home state of Pennsylvania. And it brings up a page with a very long list of different incentives available for renewable energy projects and energy efficiency projects in the state of Pennsylvania. all of these different incentive programs are run by either the state or some area within the state, like a county or an electric utility or a town, or something like that. And so, at the very top of the page, you can find information about all sorts of financial incentives. And then, if you scroll down to the bottom of the page, you can find information on state policies that are relevant to renewable energy or energy-efficient development. And so policies don't include things that would directly affect the financials of a project, like a rebate or a tax credit, or something like that. And so, you can find this stuff for just about any state in the US. DSIRE also has a nice list of federal incentives. And there's a special page for federal incentives. And if you look for the little American flag icon, just about anywhere on the DSIRE's website, it'll bring you to the page for federal incentives. And again, the page is divided into a section for financial incentives. So, these would be things like tax credits and loan guarantees. And then, relevant to federal policies for the renewable energy and energy efficiency sectors. The last thing that I wanted to point out, which is really useful on the DSIRE website is this page of maps. So, if on the left hand side on the menu bar, you'll see a page that says summary maps. And they have a whole bunch of different maps available that give you information on different things. So, one of the most commonly used is the map showing which states in the US have renewable portfolio standards. And so, they have these in PowerPoint and PDF formats. And I'll click on the PDF one-- show you what it looks like. And here it comes up. And it highlights all of the states that have enacted some sort of renewable portfolio standard. And it gives you some information about whether certain technologies are eligible under the standard. So, if you see a little sun icon, for example, that means that there's a special solar power quota within that state's RPS. And so what you're looking at here is the map that is basically Figure 1 from the lesson.

We'll categorize subsidies and incentives into a few broad categories:

The Renewable Portfolio Standard (RPS, sometimes called Clean Energy Standards) also deserves some mention, since it has been a popular mechanism to support renewable energy development in the United States in particular. Please have a look at Section III of "The Cost of the Alternative Energy Portfolio Standard in Pennsylvania" (reading on Canvas), which describes the RPS in one particular U.S. state, Pennsylvania. Pennsylvania's RPS is typical of how many such portfolio standards work. The reading also provides an overview of RPS policies in some other states. (You might notice that Pennsylvania qualifies some fossil fuels as "alternative energy sources" under its RPS, which demonstrates that RPS policies are not always equivalent to low-carbon policies.) 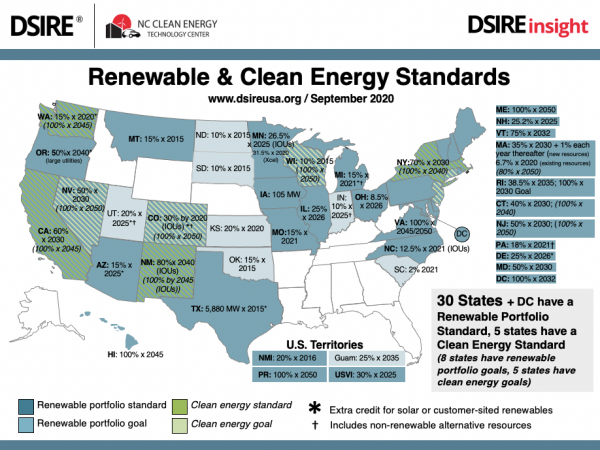 The RPS is basically a quota system for renewable energy and has been applied mostly to electricity. More than half of U.S. states have adopted some form of RPS, as shown in Figure 12.1, taken from the DSIRE website (note: look on the DSIRE web site for the most up to date version of this picture, as state programs change structure rapidly). Some countries have adopted policies for blending petroleum-based transportation fuels with biomass-based fuels (such as the Renewable Fuels Standard in the U.S., which you can read about through the U.S. Environmental Protection Agency, but our discussion here will focus on portfolio standards for alternative electricity generation technologies. Rather than subsidizing renewables through financial mechanisms as we have already discussed, RPS sets quantity targets for market penetration by designated alternative electricity generation resources within some geographic territory, like a state or sometimes an entire country. Typical technologies targeted under RPS include wind, solar, biomass, and so forth. The way that RPS systems typically work in practice is that electric utilities can either build the required amount of alternative power generation technologies themselves, or they can contract with a separate company to make those investments. Companies that build renewable energy projects can register those projects in a jurisdiction with the RPS to generate tradeable renewable energy credits (RECs). The RECs can then be sold to electric utilities who can use those credits to meet their renewable energy targets.

You can find more information on REC prices through the NREL REC report assigned as part of this week's reading. The data in the report makes a distinction between "voluntary" REC prices and "compliance" prices. Some states or areas have RPS targets that are not mandated by law, while in other states utilities face penalties if they do not comply with meeting their RPS targets.

‹ Overview up Impacts on the LCOE for Energy Projects ›
EME 801: Energy Markets, Policy, and Regulation