Gasoline, diesel fuel, and heating oil are volatile commodities – prices fluctuate up and down, sometimes dramatically, as shown in Figure 2.7 which compares spot prices for crude oil with retail prices (i.e., what you would pay at the pump) for gasoline and diesel fuel. Focusing on gasoline and diesel fuel, you will notice that there is some pattern to all of the noisiness in the graphic – prices for both fuels tend to rise starting in the spring and tend to decline in the late summer and fall. This reflects the increased demand for transportation (primarily driving) during the summer months. 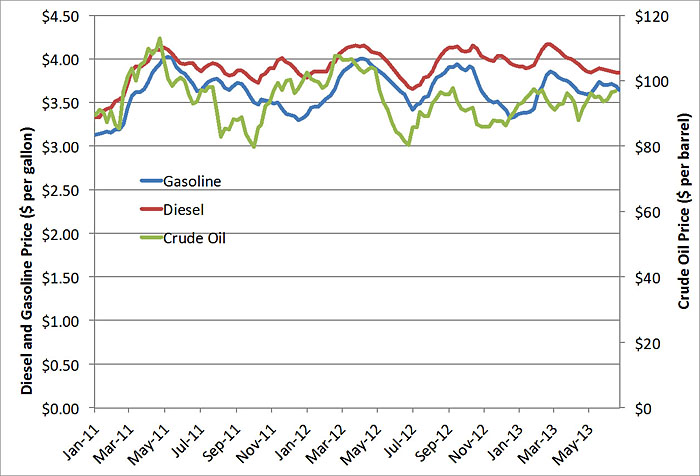 Why are prices for petroleum products so volatile? The easy (but not that satisfying) answer is that the price of crude oil can be volatile. In the United States, about 65 cents of every dollar we pay for diesel fuel or gasoline represents the cost of crude oil. The rest represents taxes assessed at the state and federal level. (In European countries, taxes are a much bigger component of gasoline costs.) You can see the volatility visually through the use of the crude oil price graphing tool from the U.S. Energy Information Administration. It allows you to plot the price of West Texas Intermediate (the benchmark crude oil price in the U.S.) on a daily, monthly, and annual basis (depending on how much variability you want to see).

Starting in early 2008, prices climbed very rapidly, reaching nearly $150 per barrel in early July. But by December of that year, the price had dropped by almost 75%! Meanwhile, more recently, the price has dropped to $40 per barrel or even lower! What on earth is going on?

That supply and demand forces were at work is the primary reason, but the nature of the supply and demand forces are worth some time discussing. Suppose that the demand for crude oil or a refined petroleum product were to increase by some amount. How would that demand be met? There are basically two options: existing idle capacity (oil wells or petroleum refineries, for example) could be restarted, or that demand could be met by drawing down crude oil or petroleum product storage. If additional capacity could be restarted, the increase in demand would lead to an increase in the market price due to the higher costs of the capacity brought back online.

But what is the cost of releasing additional supply from storage? Here, we have a tricky economics problem – the actual cost (in accounting terms) of releasing additional supply is probably pretty small. But if you are the owner of some crude oil or petroleum products in storage, if you release supply from storage now, then you can’t release those same barrels again at some point in the future unless you replenish your storage facility (which requires buying oil or petroleum products on the open market and then putting them in storage). So, by releasing from storage now, you are giving up the opportunity for some future profit. This is referred to as “opportunity cost.” (Another term used in the finance field is the “convenience yield.”) Whether the opportunity cost is high or low depends on your expectations about the future price in the crude oil or petroleum products market. If you think demand is going to continue to be high tomorrow, then you face a high opportunity cost by releasing supply from your storage today. If you think that the increase in demand is transient, then that opportunity cost is low (because you think that demand is going to go back down tomorrow). 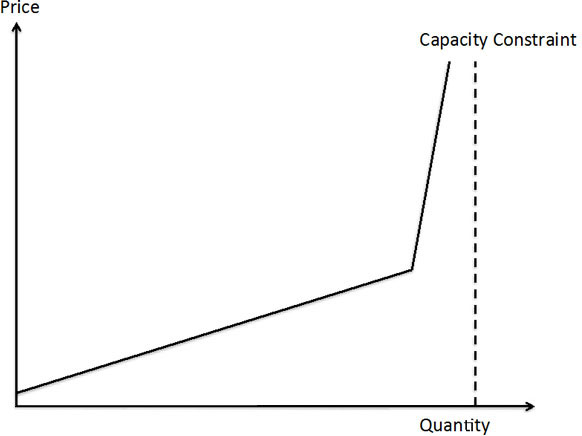 As it turns out, the opportunity cost of releasing supply from storage is related to the amount of spare production capacity, as shown in Figure 2.8. Generally, as the demand for oil or refined petroleum products rises, more expensive capacity (whether it’s oil wells or refineries) must be brought online, so the market price rises as demand goes up. As you get close to the total capacity constraint (the dashed vertical line in the figure), there is literally no more capacity to be brought online, so the price must rise rapidly in order for one of three things to happen: (i) additional supply is released from storage; (ii) new capacity can be constructed, which of course is expensive; or (iii) demand can go down because the price is too high. This transition from a slow and steady price increase to a regime of substantial volatility is endemic to the market for nearly every energy commodity, and the kink in the supply curve shown in Figure 2.8 is appropriately known as the “devil’s elbow” in the energy commodity business. 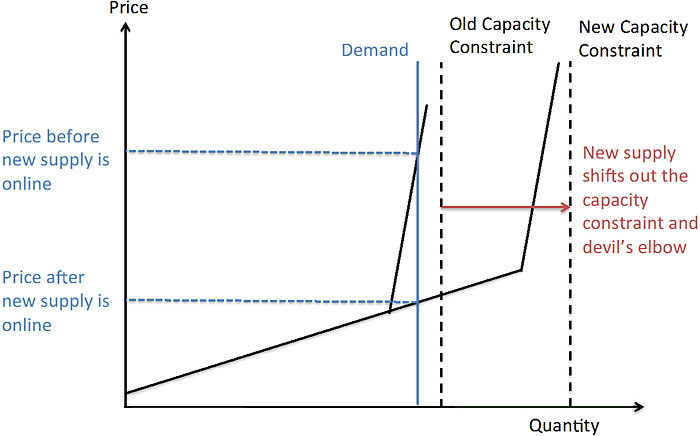 Figure 2.9: New supplies can lead to substantial declines in price. But this may keep new supply out of the market if prices drop too low relative to the costs of the new supply.

Bringing on new capacity will eventually lead to lower prices if demand stays constant – all it does is to shift the capacity constraint and the devil’s elbow in Figure 2.8 further to the right (this is shown in Figure 2.9). But this may have a self-reinforcing effect of keeping new capacity out of the market. Since new capacity in the refining business is generally built in large chunks (so-called “lumpy” investment – no one is going to build a refinery that processes a few marginal barrels of oil per day), if a new refinery is built without an increase in demand for petroleum products, the net effect may be to reduce the price for petroleum products so much that the new refinery is not profitable. Because of the devil’s elbow and the lumpy nature of bringing new sources online, energy commodity markets generally do not have a stable equilibrium like you might find in economics textbooks.

NYMEX offers futures contracts for several refined petroleum products - the most frequently-traded are heating oil and gasoline. The video below shows you where to find these prices on the NYMEX website.

Video explaining how to find information on refined petroleum product futures contracts that are traded through the CME group.
Click for transcript of NYMEX Gasoline Heating Oil.

PRESENTER: In this video, I'm going to show you how to find information on refined petroleum product futures contracts that are traded through the CME Group. So, the way that you would find those is you, again, start at the cmegroup.com home page. And the two that I'm going to show you are the two most commonly traded refined product contracts. Those would be gasoline and heating oil. And so, if you scroll down from the home page about halfway down the middle, you'll see the little ticker for energy contracts. And the one that's designated RB is gasoline futures, and the one that is designated HO is heating oil futures. So, if you click on either of these-- I'll click on gasoline-- what it will bring you to is the quote page or the current forward curve for gasoline. So, this tells you what gasoline is trading for for delivery during different times. So, for example, at this particular moment, gasoline for delivery in September 2013 is trading at 2.95 per gallon. If you were to go down to December 2013, it's trading at 2.77 per gallon. And if you go back up above the forward curve, you can click through to product specifications for the gasoline contract. For the heating oil contract, which is designated HO, from the energy ticker, you would again click on HO. And that will bring you to the forward curve for heating oil. And so, for example, heating oil for delivery in September 2013 is currently trading at 3.09 per gallon. For delivery in December 2013, it's trading at 3 and 9 and 1/2 cents per gallon. And again, you can go back up and see the contract specifications for the heating oil contract.