Illustrations of shale gas production decline curves are depicted below in Figure 4.1, for two cases – one with 3.6 billion cubic feet of estimated ultimate recoverable reserves (EUR) and a second with 4.6 billion cubic feet EUR. Production in the initial several years of the well’s productive life declines hyperbolically, and at some point, the production decline levels off reflecting an exponential (constant annual percentage) decline rate.

The equation for hyperbolic decline, assuming that production decline is tracked monthly, is:

where Pt is production during month t, IP is the initial production rate (in million cubic feet per day), and b and D are parameters that are estimated based on the behavior of a particular well or similar wells.

Meanwhile, the equation for exponential decline is:

where all variables are identical to those defined in equation (1), with the exception of Ds, which is the monthly decline rate at the point where production shifts from hyperbolic to exponential tail decline.

As an example, suppose that initial production was 10 million cubic feet per day, and the value of the b and D parameters are 1.8 and 0.58, respectively. The well exhibits hyperbolic decline for the first 60 months and then shifts to exponential decline for the remainder of the well’s life.

We would thus estimate production in month 24 (i.e., at the end of the second year of production) as

As a second example (and a check that you understand how to use the formula), show for yourself that the production for this same well in month 47 would be 1.137 million cubic feet per day.

As another example for you to check your understanding, show that production in month 83 for this well would be estimated at 0.8098 million cubic feet per day. 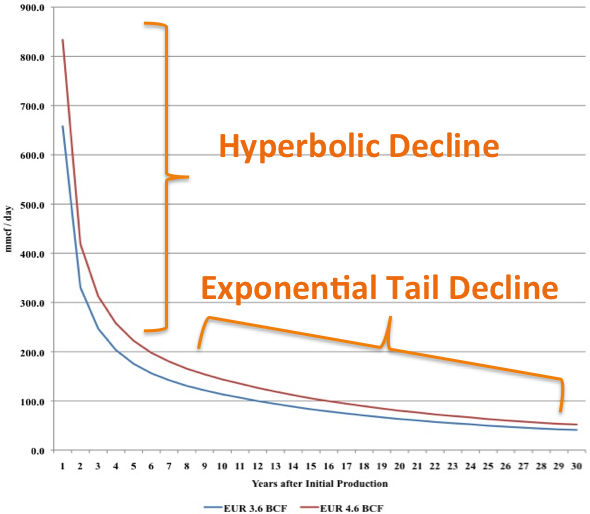 These decline curves are not just academic exercises. This sort of analysis is utilized to help determine whether specific shale energy development projects are likely to pay off. The high initial production rate and steep initial decline is characteristic of shale wells (and is a lot different than the slower decline in many conventional gas wells), meaning that most of a project’s revenues – sometimes as high as 80% of total lifetime well revenues – can accrued over the first five to seven years of the well’s producing life. As we will see later in the course when we go through examples of financial analysis for a gas well project, the “front-loading” of production in shale wells can make a big difference in project economics.