The fixed costs of power generation are essentially capital costs and land. The capital cost of building central station generators vary from region to region, largely as a function of labor costs and "regulatory costs," which include things like obtaining siting permits, environmental approvals, and so on. It is important to realize that building central station generation takes an enormous amount of time. In a state such as Texas (where building power plants is relatively easy), the time-to-build can be as short as two years. In California, where bringing new energy infrastructure to fruition is much more difficult (due to higher regulatory costs), the time-to-build can exceed ten years. Table 5.1 shows capital cost ranges for several central-station technologies. Although the ranges in Table 5.1 are quite wide, they still mask quite a bit of uncertainty in the final cost of erecting power plants.

Because of the apparent tradeoff between capital and operating cost, comparing the overall costs of different power plant technologies is not always straightforward. Often times, you will see power plants compared using a measure called the "Levelized Cost of Energy" (LCOE), which is the average price per unit of output needed for the plant to break even over its operating lifetime. We will discuss LCOE in more detail in a future lesson - it is an extremely important (and often-used) cost metric for power plants, but it has its own problems that you will need to keep in the back of your head.

Irrespective of technology, all generators share the following characteristics which influence the plant's operations: 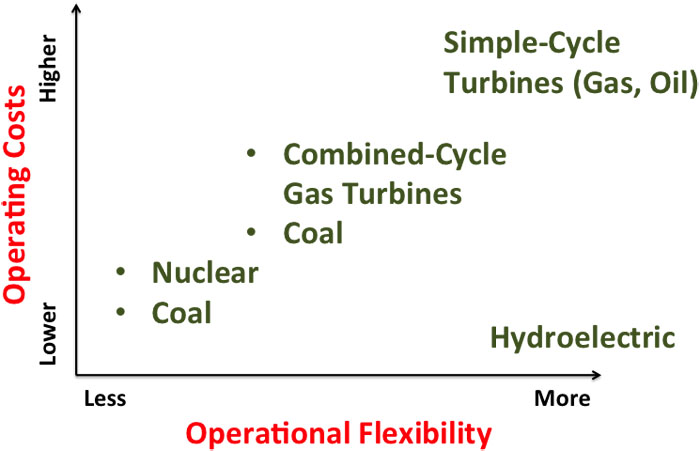 Figure 5.3: Relative comparison of operating cost and operational flexibility for different power plant technologies (this excludes most renewables since their operational flexibility is partially dependent on prevailing weather conditions such as irradiance and wind speed/direction)
Click for text description of Figure 5.3
Graph of relative flexibility and cost of power plant technology. Flexibility is on the x-axis and costs is on the y-axis. Both low: nuclear and coal. Both Medium: combined-cycle gas turbines and coal. Both high: simple-cycle turbines. Low cost and high flexibility: hydroelectric

The minimum run time and ramp times determine how flexible the generation source is; these vary greatly among types of plants and are a function of regulations, type of fuel, and technology. Generally speaking, plants that are less flexible (longer minimum run times and slower ramp times) serve base load energy, while plants that are more flexible (shorter minimum run times and quicker ramp times) are better-suited to filling peak demand. Table 5.2 and Figure 5.3 show approximate (order-of-magnitude) minimum run times and ramp times for several generation technologies. It is important to realize that, in some sense, these are "soft" constraints. It is possible, for example, to run a nuclear plant for five hours and then shut it down. Doing this, however, imposes a large cost in the form of wear and tear on the plant's components.