What went wrong with rate of return regulation?

What went wrong with rate of return regulation?

Technology improvements and economies of scale caused electric rates to fall until 1970, which made industry and residential customers happy. In 2002 dollars, price fell from about $5.15 per kWh in 1892 to about 9.7 cents per kWh in 1970. The highly regulated structure of the electric utility business created a stable environment for expansion of access to electric power. Beginning in 1970, however, prices for electric power began to rise sharply: 320% in current dollars from 1970 to 1985 (28% in inflation adjusted prices), as shown in Figure 6.1. 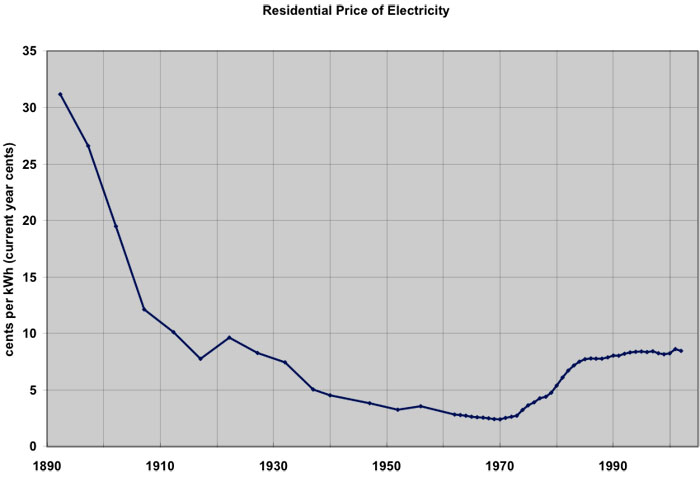 The oil embargo of 1973-74 affected both the production and consumption of electricity. Petroleum fueled 17% of US electricity generation at that time, and so, the curtailment in supply reduced the ability to generate needed electricity. (Today, petroleum supplies only 2%). The uncertain supply and much higher prices (which jumped from $3 in September 1973 to $12 a barrel in January 1974) had a devastating effect on the economy directly and the demand for electricity indirectly. Electric power generation in the United States in the period 1949 through 1973 increased exponentially (at the compounded rate of 7 ¾ % per year), and linearly since 1973 (with annual increases of 70 billion kilowatt-hours per year, the equivalent of roughly 15 new large generation plants per year), as shown in Figure 6.2. The transition from exponential to linear growth was unanticipated, and led to the decade-long over-capacity of generation discussed above. The industry went through a difficult time after 1973 adjusting to the slower rate of growth utilities had in startup, construction, or planning a doubling of generation capacity. No one knew how long the decreased demand would last and, given the penalties of delaying or canceling construction, much of this capacity was built. If the industry had continued to grow exponentially, it would be almost twice as large today as it actually is. 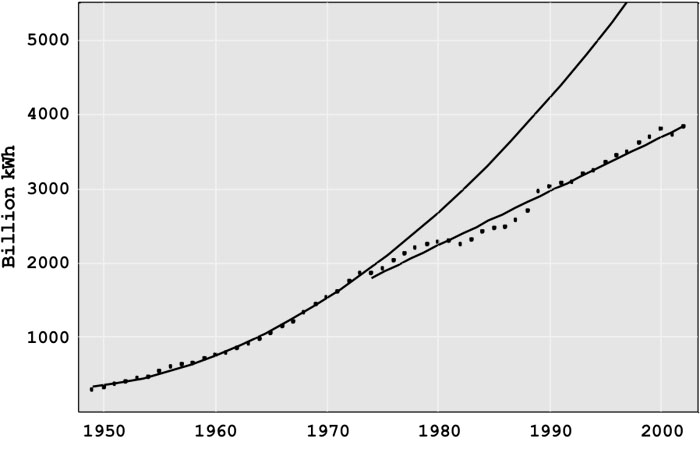 Price increases were driven by higher petroleum, coal, and natural gas prices, rate increases to cover the cost of over-capacity, particularly in generation, reduced rates of technology improvement, and by investments in coal and nuclear generation plants of a size which stretched available technology beyond cost effectiveness. In the 1970s, nuclear power plants promised low cost, environmentally benign power. Many utilities started construction of new nuclear plants. Unfortunately, the utilities learned that building and operating nuclear plants was much more difficult than operating dams and fossil fuel plants. As a result, there were vast cost overruns in construction, e.g., Diablo Canyon and the Washington Public Power System, and poor plant operation, e.g., the fuel rod meltdown at Three Mile Island.

Building excess capacity, eliminating some plants that were in planning or early stages of construction, and having nuclear plants that turned out to be much more expensive than estimated and which didn’t operate well generated tremendously high costs. Public Utility Commissions and consumers resisted putting these costs into the rate base, since they raised costs (and prices) markedly. However, since the PUCs had generally approved the investments, there was little alternative to reimbursing the utilities for the majority of these costs.

The electricity price increases came at a time when deregulation of the airlines (1978), railroads and the trucking industry (1980) were reducing prices substantially. The price increases upset consumers and generated intense political pressure to hold down electricity rates. One proposed answer was deregulating electricity, fostering competition and lower prices

As a reaction to the 1973 energy crisis, Congress passed the 1978 Public Utilities Regulatory Policies Act (PURPA), eliminating, at least in principle, protected monopolies for electric generation. The success of early non-utility generation facilities and of deregulation in other industries led to provisions in the 1992 Energy Policy Act encouraging wholesale and retail choice in electricity. Over the next decade, nineteen states and the District of Columbia enacted some form of electric restructuring legislation.

As shown in Figure 6.1, the price of electricity rose 50% from 1970 to 1975. The “minor” issues in the Rate of Return Regulation (RORR) structure that had been ignored now became major problems. The defects had been hidden by rapidly evolving generation technology that continually lowered generation costs.

Clearly, there were problems with RORR. One alternative would have been to reform the regulatory process, as was originally tried in the United Kingdom. The other alternative, which was embraced first within Chile and the United Kingdom before spreading to the United States, was a package of reforms that would change the way that some parts of the industry were regulated, and loosen regulations in other parts of the industry.