Recall from the Ancillary Services discussion that generators are used to provide frequency regulation by effectively increasing the size of the faucet relative to the drain (if you don’t remember the bathtub analogy, go have a peek at Figure 7.6). There is no particular reason that generators need to have a monopoly on this. If we were to change the size of the drain relative to the faucet, we would accomplish the same thing, right?

The idea of balancing supply and demand on the demand side rather than solely on the supply side is not that new – electric utilities have been paying their customers to put timers on thermostats or hot water heaters for decades. Some utilities have even figured out how to charge customers more for electricity during the day than at night. But following an order from the Federal Energy Regulatory Commission in 2012 (Order 745), there has been a renewed interest in developing mechanisms to pay people and businesses not to consume electricity. “Demand Response” refers to end-use customers adjusting demand in response to price signals, or energy conservation during periods of high demand (to prevent blackouts). Many electricity systems, particularly those with active wholesale markets, have implemented wholesale demand response programs that allow customers to offer demand reduction on the same basis that generators offer supply. There are two basic flavors of demand response:

Many electricity systems, both regulated and restructured, are also experimenting with allowing demand-side participants to offer ancillary services such as frequency regulation (remember the bathtub analogy and you will see that, at least in concept, this is a perfectly sensible idea). But to date, the vast majority of demand-side participation, and over 90% of all of the profits from demand response, has been through the capacity market. Figure 7.8 illustrates the rapid growth in demand-side capacity market participation. In recent capacity auctions, the largest source of new “capacity” was actually commitments to reduce demand rather than increase supply. 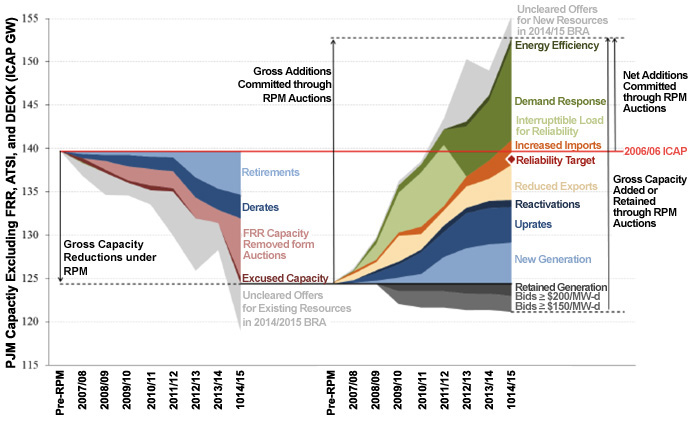 The primary piece of regulation that has enabled demand response in electricity markets is known as FERC Order 745, which mandated that Regional Transmission Organizations compensate demand response at the prevailing market price under most conditions. This means that if you successfully offer electricity demand reduction to the RTO, you benefit twice. First, you benefit by not having to pay for the electricity that you did not consume. Second, you benefit because the RTO pays you the prevailing market price for all of that foregone consumption.

Because of the way that Order 745 has mandated that demand response be paid, it has been very controversial, so much so that it was successfully challenged in May of 2014 before the U.S. Circuit Court in Washington, DC. You can read the entire ruling here, but the gist of the arguments against Order 745 were as follows:

The D.C. Circuit Court agreed with both of these arguments and overturned FERC Order 745, effectively removing economic demand response as a participant in U.S. electricity markets. In a moment that captured the attention of electric power industry geeks everywhere, the D.C. Circuit Court decision was appealed to the U.S. Supreme Court, which overturned the Circuit Court decision and allowed demand response to be paid the same way that power plants get paid. If you happen to be a legal junkie, you might like to read the Supreme Court's decision, which has had implications for a lot of different smart grid technology programs run by regional power markets.