This is a difficult choice because it involves tradeoffs over time. The natural gas generator has a low up-front cost but a higher operating cost. The wind generator has a higher up-front cost but a very low operating cost, because fuel from the wind is free (at the margin). This tradeoff is shown visually in Figure 9.1, for a 1 MW natural gas and wind power plant — for the sake of comparison, we assume that each of the plants operates 30% of the time, so each produces 1 MW × 8,760 × 0.3 = 2,628 MWh per year.

This 30% figure is called the capacity factor, and it measures how much electricity a power plant produces in a year versus how much it could produce each year if it operated all the time at 100% capacity.

One of the most frequently-used metrics to compare projects with different capital and operating cost streams is the net present value, which incorporates the present discounted value of all project costs and revenues. 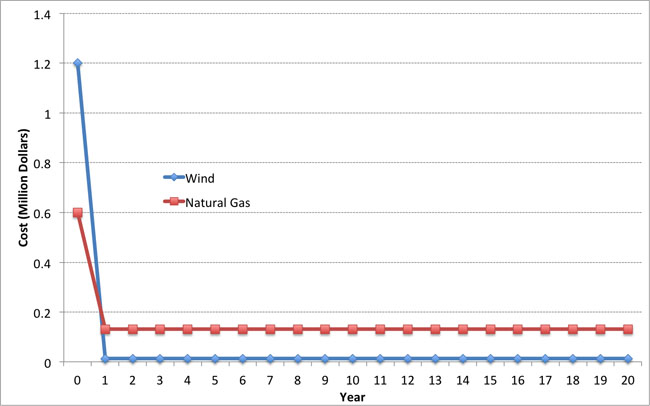 Figure 9.1: Capital and operating costs for a 1 MW natural gas and wind power plants over a 20-year operating horizon.

In the equations, T is the time horizon for the project and r is the discount rate. If the net present value of a project is greater than zero, then the project is said to break even or be "feasible" in present discounted value terms. If you are in a position where you are evaluating multiple alternatives, you would normally want to choose the alternative with the highest net present value.

Sometimes, we will be interested in the net present value of a project as of some year prior to T. We will call this the "Cumulative NPV" as of year X. Mathematically, this is defined as:

Where X is some number smaller than T.

To illustrate, let's go back to one of our examples from earlier in this lesson. Our wind power plant had a capital cost of $1.2 million and annual operations costs of $13,140. Suppose that it had annual revenues of $100,000 and faced a discount rate of 10% per year. Each year, it thus has annual profits of $86,860.

Assuming that all of the capital costs were incurred in Year 0 and the plant began operating in Year 1, the present discounted value of each of the first three years of operation would be:

The Cumulative NPV for the first three years would be:

Calculating NPV is reasonably straightforward in a spreadsheet program such as Excel. There are two functions in Excel, PV and NPV, that will calculate net present value for you. The difference between the PV and NPV functions is that the PV function assumes that you have the same profits in each period (as in our example above), while the NPV function does not make this assumption.

The video below shows an example of evaluating NPV using Excel. The example in the video is our natural gas plant from the previous lesson. Registered students can access the Excel file discussed in the video in Canvas.

So in this video, I'm going to show you how to set up a very simple undiscounted cash flow analysis and calculate a net present value in Excel two different ways. So we're going to go through two different ways of calculating the net present value. One way will be basically by brute force, which will show you how to calculate the present discounted value of costs and benefits in each year. And then you add them up by brute force to get NPV.

The second way is using a built-in function in Excel called the PV function. So we're going to go through both of these. The example or the situation that we're going to use is a power plant. So we have an example of a hypothetical power plant. And it has some capital cost, so some cost to build.

And we have year 0, so the current year, all the way down through 5 years from now. So now we have to fill in these table with numbers. So the capital cost we assume is incurred only in year 0. So you only have to spend money this year to build the plant. So that's going to be equal to minus $500,000. You have to be a little careful here when you're doing these things in Excel. You have to be careful that costs are negative numbers and revenues are positive numbers. Otherwise, Excel will mess up your calculations because it doesn't know which one is which.

So the annual undiscounted cash flow is going to be the sum of capital cost, operating cost, and revenue for each year. So I'm going to use the sum function here in Excel. Summing over those three columns. In undiscounted terms, this plant costs the owner $500,000 in the first year, and then brings in benefits equal to $135,000 a year for five years.

So now we need to discount this. So remember that to discount some future value back to the present, we take that future value and divide by 1 plus the interest rate raised to the t-th power, where t is the year that we're talking about. So we're going to take this and divide it by 1 plus-- and I'm going to lock this cell by putting dollar signs around it-- raised to 0th power. And so this is just going to give us minus $500,000, because we're raising something to the 0th power, so she's going to be 1.

The cumulative net present value in year 2 is equal to whatever the plant was worth cumulatively at the end of year 1, which would be this $377,272.73 plus the present discounted value of its net revenues in year 2.

And if we keep going here, what we find is that at the end of year 5, in present discounted value terms, the plant is worth $11,756.21. So that's the same thing that you would get if you were to add up all of the discounted cash flows. So I'll do that here.

So if you add all of the discounted cash flows, just following the formula that was in the reading and in the lecture notes, you'll get the same thing as what you would get in year 5 if you calculated the cumulative net present value of this plant after every year.

In Excel, there's a way to do this with a shortcut, without having to do all of these calculations manually. And it is called the Present Value or PV function. And so the way that you would call the PV function is to type =pv and then parentheses. And then the first thing that asks you for is the annual interest rate, the number of periods. And then the undiscounted cash flow each year in years 1 through t. So here in years 1 through 5. So we're going to give it that.

One of the things about using the PV function is that it does not understand year 0. So it does all of its discounting starting from year 1. And so you then have to add in year 0. And the other thing about the PV function is that it assumes that all numbers are negative. So you have to put a negative in front of the PV sign. And when you do that, you will see that you get the same answer that we did using the brute force method.

So the way that you call this is =npv, and then the discount rate. And then your stream of future earned discounted cash flows. And just like the PV function, the NPV function does not understand year 0. So you have to add in anything in year 0 separately. And you get exactly the same answer.

There are two special cases where calculating the NPV is especially simple - the "annuity" and the "perpetuity." When a project's annual cash flow is the same in each year, not unlike a fixed-rate mortgage, we refer to this type of project as having an annuity structure. In this case, because the cash flow is the same each year, the summation term in the NPV can be greatly simplified. The formula for the present value of an annuity is shown below; if you are interested you can find the derivation in the reading accompanying this lesson.

where a is the annual cash flow. To illustrate this, let's calculate the present value of the wind power plant over a three year operating time horizon (T=3), using the annuity formula. One of the tricks here is that you need to take the Year 0 cash flow (the 1.2 million dollars capital cost) outside of the formula.

, which is just what we got using the NPV formula.

If an annuity involves identical payments over a long period of time (tens of decades, for example), we can approximate the NPV of the annuity using an extremely simple formula called a perpetuity. If we take the annuity formula and let T get really really large (tending towards infinity) then the "-1" term from the numerator becomes meaningless relative to the term, and the present value becomes:

As a rule of thumb, if the annuity lasts longer than 30 years, you can probably approximate the present value reasonably well using the perpetuity formula.