Herman E. Daly (1938-), a renowned expert in ecological economics, who has been a longtime proponent of the concept of sustainable steady state economy (as opposed to economic growth), formulated several basic rules for sustainable society, known as Daly Rules:

Sustainable steady state theory states that human societies can grow to a special state, where resource supply and consumption are balanced. This should be considered a sustainable steady state. After this balance point has been reached, only refinement of societies (via better use of available resources through more efficient technologies) instead of growth (increase in supply and consumption of resources) should be pursued.

According to Daly’s theory, economic growth cannot be forever maintained because the planet and its resources have finite physical dimensions and capacity:

“If resources could be created out of nothing, and wastes could be annihilated into nothing, then we could have an ever-growing resource throughput by which to fuel the continuous growth of the economy. But the first law of thermodynamics says NO. Or if we could just recycle the same matter and energy through the economy faster and faster we could keep growth going. The circular flow diagram of all economics principles texts unfortunately comes very close to affirming this. But the second law of thermodynamics says NO.” [Daly, 2009]

But is reaching a sustainable steady state in fact realistic and practically achievable? Daly argues that there is a practical alternative to economic growth paradigm. That would rely on a number of critical economic steps and policies. Daly's measures may seem controversial and somewhat radical at a national or international scale, but they touch an important scaling question: how large can a system be and keep its potential for sustainability?

Please click on the following link to review Daly's proposals: "From a Failed Growth Economy to a Steady-State Economy".

Note: This this the first article that will be related to the topic of our first forum discussion.

If you are interested in learning more about Dr. Daly's views on economic growth, check out this video with his interview "Herman Daly on the Economy and the Environment"

Contrary to the steady-state paradigm, an alternative view expressed in works by Howard T. Odum and collaborators (for example “Environmental Accounting: Emergy and Decision Making” 1995) considers the whole planet a self-organizing system, where storages of resources are continuously depleted and replaced at different rates, and matter recycling and reorganization is driven by solar, geothermal, and gravitational energies. It is hypothesized that one of the possible reasons for oscillating systems to be preferable over steady state systems is that they are governed by the system feedback to changing environmental conditions or depletion of one or other storage. The system should be able to tune its performance according to the changing environment.

As the diagram in Figure 1.2. illustrates, net primary production and storage of resources (expressed as Quantity Q) develop faster than consumer assets (expressed as Quantity C) until the system reaches a threshold where autocatalytic and higher order pathways are accelerated. At the threshold, consumer assets show a sudden increase at the expense of the environmental storage (consumer pulse). As the resources are used up quickly, consumer assets drop, allowing a new cycle of building resource storage to begin. In the case of global economy, the storages can be represented, for example, by oil, minerals, topsoil, and other slowly renewable resources, while the consumer assets are human economies and civilization. The theory presumes that this kind of pulsation can be sustained over time. 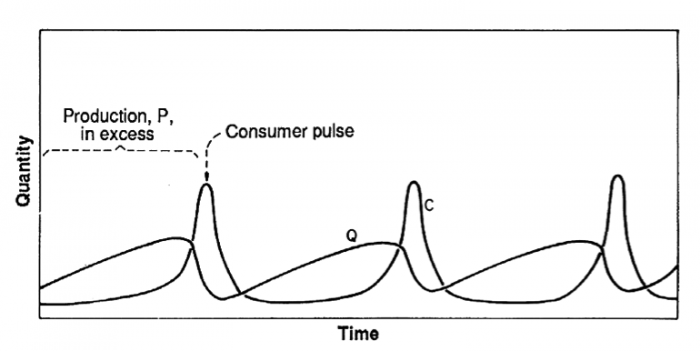 Some contemporary scientists find Daly's arguments overly pessimistic. For example, Erle Ellis, an associate professor of geography and environmental systems at the University of Maryland, Baltimore County, and a visiting associate professor at Harvard’s Graduate School of Design, argues that over the course of the anthropogenic history, humans have almost never relied simply on the carrying capacity of natural ecosystems, but rather created specially engineered ecosystems. Such artificial eco-niches utilize intelligent approaches and technologies for extracting more usable resource from the nature. So, essentially, Ellis infers, there is no problem of limiting carrying capacity due to creative transformative powers of humankind.

Within the anthropogenic ecology theory, the emergence of new sociocultural niches in human society is represented as a novel evolutionary process in the Earth system. These niches are the result of re-shaping the biosphere into new organizational level which allows virtually unlimited upscaling of societies through culturally mediated changes.

Please click on the following link to learn more about Erle Ellis views: "Overpopulation is not the Problem"

Note: This is the second article that will be related to the topic of our first forum discussion.

To better understand and to analyze the dynamics of feedback and oscillations within socio-ecological systems, it would be useful for us to look at the basics of the systems thinking approach. This thinking framework is especially important to sustainability science, because it allows tracking logical interconnections between natural factors, economic factors, social motifs. More details are given further in Section 1.5 of this lesson.