When you are reading, I want you to focus on Forms of energy, Sources of energy, and Supply (production) vs. Demand (consumption) of energy. These four terms are simple but very specific. One thing that you can use to remember them: energy is neither created nor destroyed, but can be transformed from one form to another, and we call our sources of energy resources. The economics of energy is also directly discussed in terms of supply and demand.

We believe the global demand for energy in its various forms will keep rising, spurred on by an expected increase in population and industrialization of many developing countries. Policy makers, entrepreneurs, and scientists will be faced with serious questions on how to produce and deliver required energy to consumers. But focusing in on the USA, how does a country use energy where local population growth is smaller and energy use has been outsourced to other developing nations? 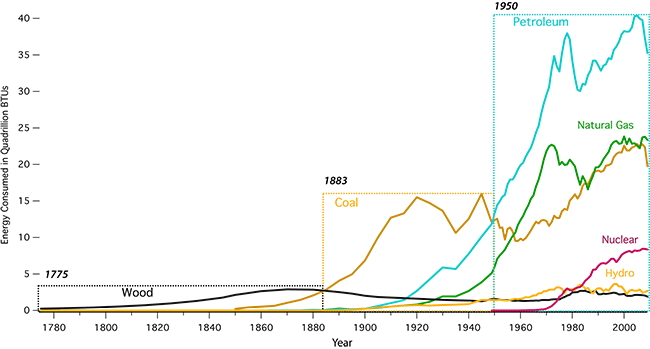 Figure 1.1:Historical energy demand (consumption) within the USA, separated in terms of resource. The chart begins at 1775 and ends near 2010. In this chart, renewables from wind and solar are not presented--only hydropower is seen in yellow. This changed as of 2010, as we will see below.
Click for text alternative to Figure 1.1.

Wood begins at a little above 0 Quadrillion BTUs in 1775 and stays low, rising to only about 4 at its peak in about 1870.

Nuclear begins at just above 0 Quadrillion BTUs a little before 1950, stays steady until close to 1970, then begins rising slowly to a peak of about 7 Quadrillion BTUs by the end of the chart.

Trends in the past few centuries: 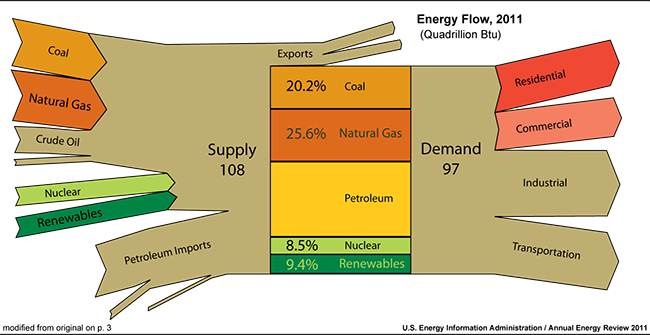 Video Explanation of Figure 1.2: Energy flow for Supply and Demand in 2011 for the USA. Note that renewable energy is now a larger share than nuclear power. This is from the increases in wind power and, to a lesser extent, increases in solar and bio-based energy.

Click here for a transcript of the Energy Flows Video.

So what you're seeing here is a flowchart. It actually is called a Sankey diagram. It's a flow of energy across supply and demand for the United States. And up here on the left, we're seeing coal, natural gas, crude oil that's produced from the United States, as well as nuclear power and renewables. At the bottom, you're seeing petroleum imports. Those are actually petroleum that we use in society that's coming from outside the United States. Our supply of energy is on the order of 108 quadrillion BTUs, otherwise known as quads. Quads is just a very convenient large-number energy unit to use when we're talking about energy supplies and demands on a country-wide level.

You're seeing that we have a supply of 20% of our energy from coal, 25-26% from natural gas, a large share for petroleum. And what I want you to really focus on is that as of 2011-- actually, 2010 is apparently when this transfer became relevant-- the amount of power from renewable energy-- and that includes hydropower with wind and solar and others-- that supply of energy became larger than the United States supply of energy from nuclear power.

So we've got a really interesting significant change happening in the United States very recently. And it's largely tied to the very large growth, very rapid growth, of wind, followed by solar. The United States itself currently produces more energy than it actually demands. I've highlighted out in this slide two of the four sectors of energy demand-- the residential and the commercial sectors are energy demand for the built environment, for building systems. And so residential buildings, your homes, versus commercial buildings, which could be thought of as schools, hospitals, retail stores.

Industrial energy demand is tied to larger-scale materials production, materials processing. Fuel processing is industrial. And then on the bottom, we have transportation.

Watch the following video showing the ways we use energy in the USA and around the globe.

So we see here the same four areas of energy consumption or energy demand, on the left. And again, we see that residential and commercial buildings are consuming about 41% of our total energy demanded for the United States. If I want to just look at the residential area, I can break that down into the way that we use the energy.

And as of 2009, the large share of energy was tied to space heating, and a relatively small percentage of the entire United States was then linked with electricity used for air-conditioning and refrigeration. So we have 30% of our energy tied into lighting, tied into appliances. These are our televisions, our modems, our coffeemakers, as well as all of our lighting for our homes. And then another 18% goes into keeping water hot.

Of those different segments of how energy is used in homes, I want to point out that a large share of that energy is being put in by natural gas, about 50% right now, whereas about 40% is electricity. So really, we're looking at two very dominant players in energy supply in residential homes-- natural gas and electricity. That's not to say that we don't know of homes that use fuel oil. Or in this region, actually, fuels that heat homes are using combustion of coal, even, is still possible.

If I go beyond the energy use in homes and I dial out to this global scale, I actually plotted here the major energy producers from back in 2004. The reason I did this was so that we could also compare how things have changed as of 2011. So in 2004, the United States was the largest energy producer in the world. As of 2011, that has shifted. And right now you're looking at a flip between the United States and China.

And these data are being drawn from this link up here under yearbook.enerdata, energy consumption. Let me see if I can bring that up. The website for that is right here. What we're seeing-- countries and the value of their energy consumption.

So going back and moving on, one of the things that I want you to keep in mind with energy use is that energy use is very strongly tied to population growth. So on a global scale, as we have increased in people-- from a billion people on the planet in 1850 to over 7 billion people on the planet in 2011-- really what we're seeing is an increase in energy consumption as well. Because everybody has some basic needs for shelter, for food, for clean water that requires a net use of energy to accomplish those things.

And on top of that, we're going to have people in developed countries, people who are living a much more luxurious life, in economic luxury, in say the United States, Europe, where we're seeing people using a lot more energy than they need, in which case it's a luxury. And that is also driving energy consumption. But the world population growth is almost like this unstoppable aspect of energy demand we need to be aware of. 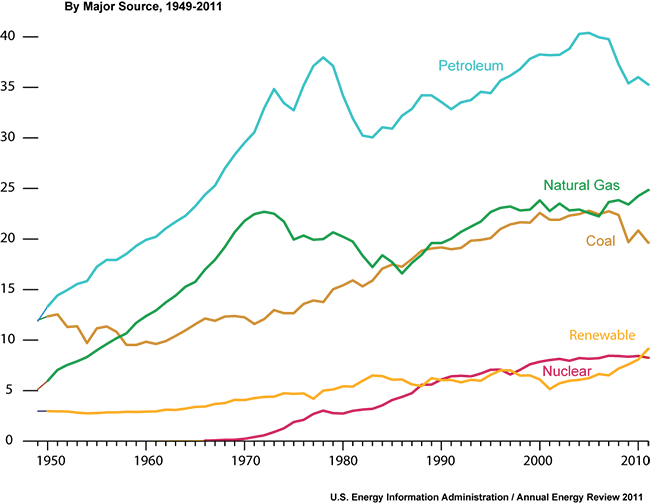 Figure 1.3: Energy Supply in the USA from different resources (1949-2011). The transition for renewables over nuclear occurred around 2010, while the recent uptick in natural gas over coal is associated with the boom in hydrofracking.
Credit: U.S. Energy Information Administration, Annual Energy Review 2011, published September 2012

In the past century, society has been dependent on combustible products such as coal, natural gas, and petroleum products as the fuels of choice. While these energy sources are relatively cheap, they are not always available or located where we most need them, and they are non-renewable. In addition to this, there are real concerns about the effects burning these products could have on human health and safety as well as large impacts on the environment in general. The following are geofuels (resources from the Earth that are non-renewable).

Nuclear energy is an additional geofuel that does not have a major CO2 impact and is a major resource in countries like France. However, it has a strong "yuck factor" for the majority of society in Germany and the USA. It has the additional challenge of undesirable proliferation of fissile material for arms use. Again, there are numerous countries including the USA that make use of nuclear power for low-CO2 energy, but infrequent, high-visibility events such as Three-Mile Island, Chernobyl, and Fukashima Daiichi continue to influence popular will to invest and develop the resource.

Renewable energy sources provide a suitable alternative to using fossil fuel combustion (which generates CO2) to meet our energy needs. The well-planned use of renewable energy sources such as solar energy must form a part of the portfolio of energy sources. There are numerous real challenges for renewables like solar, such as intermittency and diurnal cycles (night-day), as well as the ability to identify economic opportunities, which is why we are putting a lot of energy into understanding the solar resource and the related economics in this course.

The following links use Gapminder World to show the increases in cumulative CO2 production through time associated with population growth. Click on the link and press "Play" in the bottom left: