There is a common phrase used in the solar world, which holds two distinct meanings to two user bases. First, I want you to understand the difference between an air mass coefficient used to qualify the testing conditions of a PV cell, and then I want you to understand the air mass (relative to source regions) that we will use to help in our assessment of the dynamic solar resource for clients in their multiple climate regimes.

For the good of the engineering community, air masses were "fixed" in 1976 as the U.S. Standard Atmosphere for the ideal clear sky atmosphere in the mid-latitudes of the USA. Yep, and nothing has changed since 1976, right? (cough)

Actually, the American Society for Testing and Materials (ASTM) developed the "Terrestrial Reference Spectra for Photovoltaic Performance Evaluation" so that we could compare and evaluate the performance of our solar technologies, like PV cells and modules. The full documentation of the reference standard is held by the National Renewable Energy Laboratory (NREL AM Standard).

The specified atmospheric conditions are:

Actually, we are speaking of an air mass coefficient: a relative measure of the optical path length passing through the Earth's atmosphere, as described for a fixed moment in time and space. We express the air mass coefficient as a ratio of the direct path of the global shortwave irradiance incident upon a specially tilted surface, relative to the path length for a horizontal surface (optical path oriented vertically upwards as the normal).

The first thing we need to estimate is what the intensity of the global horizontal irradiance would be just "outside" of our thin covering atmosphere. So, how do we determine the solar energy incident upon the extraterrestrial surface for the Earth-Atmosphere system?

First, we begin with the annual average solar constant, in units of irradiance (recently updated as of 2012! No longer 1366 or 1367 W/m2 if you knew that value). The average annual Solar intensity will actually vary according to an oscillation linked to 11-year cycles of sunspots. Given a large number of sunspots, the solar constant will be higher (~ 1362 W/m2) while the value will drop to ~ 1360 W/m2 when there are not many sunspots (changes about 0.01%). You can see NASA's Solar Radiation Climate Research Area (accessed Feb 13, 2013).

Here, G is for Global irradiance, and "sc" stands for solar constant.

Second, we estimate the irradiance of the Sun for the intensity collected on a plane perpendicular to the beam shooting out from the Sun that is also perpendicular to the surface of the Sun (the normal radiant exitance). We would term that "normal global irradiance at AM0" (G0,n). This would be the equivalent of an estimate at zero cosine projection error, or the angle of incidence is zero. The cosine function in the following Equation delivers the change from zero to one, reflecting the cyclic orbit of the Earth relative to the Sun.

Here, G is for Global, "0" is for Air Mass Zero, and "n" stands for radiant exitance normal to the surface of the Sun.

During the Australian summer, the actual value exceeds 1416 W/m2, and then drops down to around 1326 W/m2 during the summer in the Northern Hemisphere.

Why would a Canadian summer not be as bright as an Australian summer (in outer space of course)?

Third and finally, we need to estimate the AM0 irradiance for any given horizontal surface on Earth's surface (G0). Think about it, a horizontal surface on Earth (or just outside the atmosphere) will be tangent to the curvature of that locale on Earth. We should notice in the following equation that the Earth-Sun relations of declination ( ), latitude (), and hour angle () are all included in this irradiance equation for AMO.

By comparison with our work from Lesson 2, I can point out that the equation is actually multiplying the Equation for G0,n with the Equation for the solar altitude angle: Another way to write this would be Wow! Lesson 2 really comes in handy!

As a reminder, the relation to find is:

Consider that the sine of the altitude angle ( ) is the same as the cosine of the zenith angle ( ).

where the hour angle for sunset has been defined in Lesson 2 as:

The "standard" for testing. The air mass coefficient is defined in proportion to the cosine of the zenith angle (): the angle between the beam from the Sun and the normal vector pointing directly up to the zenith of the sky (normal to the horizontal surface).

By equivalence, the cosine of the zenith angle is the sine of the altitude angle , as we just demonstrated above.

Anecdotally, we noticed that the "ideal, engineered" clear sky conditions for AM1.5 or better (<AM1.5) are related to a window of time in a given locale. As a rule of thumb in the industry, we often mark off approximately 6 hours (centered on solar noon) for "prime" solar resource times during the day.

If one were to invert the problem and instead calculate the hour angle (and thus the time) from the air mass coefficient and zenith angles, we would find a mirror image of two times when that AM1.5 condition occurs on an ideal clear day in the summer (near the solstice). In the mid-latitudes of the continental USA or Europe, those instances of AM1.5 would occur sometime before 9am and after 3pm solar time. Any time within that window, the air mass coefficients would be less than 1.5.

Voila, the six-hour rule of thumb emerges from the Air Mass calculations. 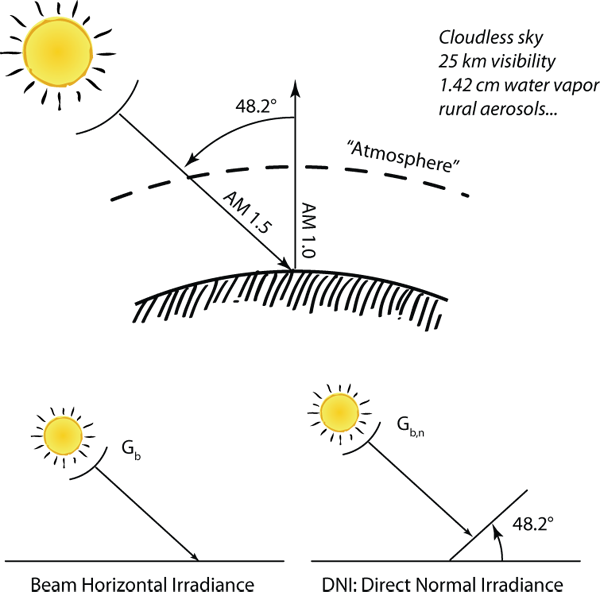 Figure 3.9 illustrates the concept of airmass with respect to a zenith angle of (AM1.5), or an altitude angle of The hypothetical receiving surface would be tilted at ß = 37º for global irradiance Gt and an angle of incidence of

Gueymard has since developed a modified air mass model that will also apply for zenith angles >80°, as the former model tends toward infinity at .


2. What is the Air Mass for 2pm solar time on June 21 in State College using the simple parallel plate equation? (Note: the tough part was finding either or from latitude and declination values.)


3. What is the Air Mass for 10am solar time using Gueymard's equation?


4. What is the Air Mass for 6am solar time using Gueymard's equation?

5. Using the simple form, what solar altitude angle will provide AM1.5?

ANSWER: From observing the figure or by solving the equation, we find AM1.5 is derived from a zenith angle of and a solar altitude angle of . In State College, on June 21, this occurs near 8:23am and 3:37pm solar time. This is sufficient to estimate a 6+ hour window of AM1.5 or better conditions on a clear day in the mid-latitudes of the USA and Europe.
‹ 3.7. Introduction to Spectral Reflectance, or Albedo up 3.9. The Air Mass used in Meteorology ›
EME 810: Solar Resource Assessment and Economics