Remember how we stated that light is directional? Light also has a "life" including the birth and death of a photon. Electromagnetic radiation is emitted from a surface and will encounter objects in its many paths. The fate of electromagnetic radiation (as a photon) depends on wavelength of the photon at hand and the physical composition of the objects along its path. Again, the photon is a packet of radiation and can interact with molecules or atoms in its path, being transmitted, absorbed, or reflected.

The action of "reflection" is more appropriately described as "back-scattering" by atmospheric physics, which is why you see that term in the figure of possible paths of light. We also have seen a shorthand diagramming technique from the textbook to describe the life events of ensembles (really big groups) of shortwave and longwave photons.

I would like to pull the concept of photon lifetimes in the following video.

All right, so let's do a quick discussion of the sources of radiation, source of light, and the surfaces that receive light in the lifetime of the photon, right?

So, right now, we've got what is going to be a black body emitter that is emitting both shortwave light and longwave lights which probably have a pretty high temperature surface, something like the sun, maybe around 6,000K. And it's going to emit light, it's going to travel a long distance.

Somewhere along the distance, it's going to be transmitted through a transparent surface, something like maybe a window, the atmosphere. And, ultimately, it's going to meet its end where it will be absorbed by some opaque surface. We're going to have something dark and opaque over here that's going to absorb the light. And I've got these little dashed lines to signify absorbed light.

However, if that material were heading in, say, it went through the window again, and were to hit a reflective material, something like a mirrored surface. We would draw that light bouncing off the surface, and, of course, it would not be absorbed by the surface. In reality, we have surfaces that do both things, that absorb some of the light, and reflect some of the light.

We're going to have-- use the symbol rho for reflectance. Maybe it is reflecting 30% of the light and it is absorbing 70% of the light. We would give these fractions from 0 to 1 to describe those percentages. But we certainly can do that in a quick diagramming technique.

Figure 3.6 Our symbolic notations for diagramming the emission, transmission, reflectance, and absorptance of light (both shortwave and longwave bands).
Credit: J. Brownson © Penn State University is licensed under CC BY-NC-SA 4.0

Each of these phenomena is happening simultaneously, and the next video opens up that discussion.

So, right now, you're looking at an image in the website. It's really diagramming everything that can happen when light is interacting with matter, with surfaces, with molecules, what happens in that process in the lifetime of a photon. And what I like about this diagram is it's actually diagramming everything happening at once, which is more realistic of what's actually happening.

Remember that when we say incident radiation, what we're talking about-- light is directional-- and so we have a language for light that's being emitted from surfaces. That's radiant exitance, radiance, radiation. And we have the language, the terminology for the light that is incident upon a surface. And so, what we would call this-- we probably correct this to call this irradiance, N-C-E, or irradiation, as well. So, either one of these is talking about light incident upon a surface.

And so, again, what we're seeing is light coming into a surface. This is really meant to be indicative of what's happening in the atmosphere. And so, we have light that is absorbed by this material, and this could be the atmosphere or it could be clouds. It could be water molecules, for that matter. We have scattering happening in, and the scattering events are basically reflections. So, back-scattering is really indicating reflection. Absorption is indicated by alpha. So, we have scattering events on a surface, even though that surface, in our case, is a single dot. And the scattering, in our case, could be back-scattering. It could also be forward scattering happening. And that's why you had these two different arrows.

And the last that you have is transmission, and that's really that nothing was absorbed. So we're going to diagram that with a circle. That's going to be a tau equal to or, let's say, a tau approaching one. Something that is very transparent is going to have a coefficient, a fractional value closer to one. Something that is very dark, very opaque is going to have a fractional value close to one for alpha.

And somewhere in between this, all of these things happening, we have to recognize that all this light coming in is going to be equal to one in a fractional sense. And then, the three different things that can be happening is it could be absorbed, it could be reflected, and it could be transmitted. But the balance of all of that energy is still going to add up back into one. So, we can have a very opaque material, which will have a high absorption coefficient, and transparency that will go towards zero, in which case we'll have, basically, just absorption and reflection happening.

And that reflection and absorption process happening is called a gray body. So, it's an opaque material that reflects some of the light and absorbs the rest of light that is incident upon that surface. And if you think about it, when we want to call something a black body, what a black body means is that the absorption is all one. It's absorbing perfectly. It's not reflecting any of that light. It's not transmitting any of that light. That is a black body. And a black body, like the sun, which is a very close approximation of a black body, is also going to use Kirchhoff's law, so you'll have absorption equal to emittance, and so the emittance is going to be equal to one as well.

So, we've got some pretty interesting stuff going on that's really demonstrating everything that we've learned about light so far, and we've demonstrated that we've got a few diagramming techniques that will tie this together. 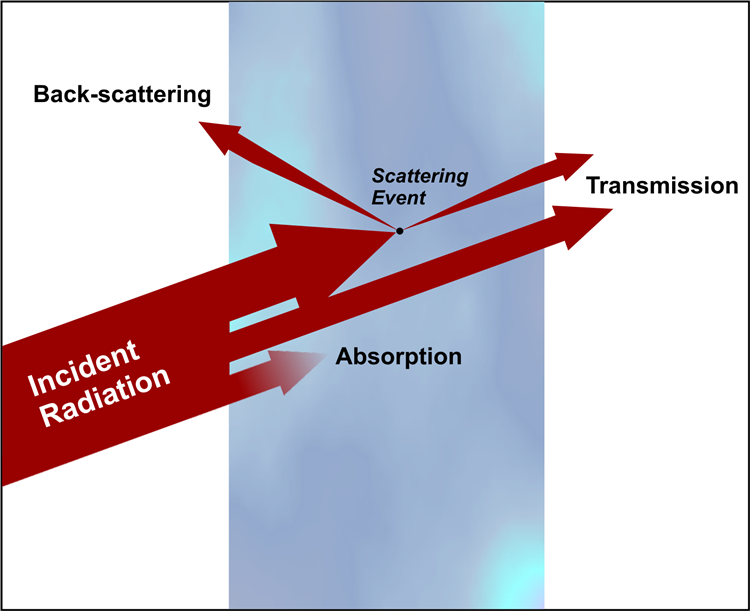 Emission ($\epsilon$), absorption ($\alpha$), reflection ($\rho$), and transmission ($\tau$) can all occur at the same time (in fact it always does). We also know that there is a relationship between light energy balances and temperature. When a receiving surface or material absorbs more energy than it emits, the internal temperature of the material will increase (effectively pumping up the system's energy density). Consider a bright summer day, where your rooftop absorbs much more solar radiation than it emits (or conducts away). The roof surface temperature will rise from just after sunrise to the late afternoon.

Now, let's put our diagramming into action. So, we've already learned our shorthand that the surface emitting light is going to have a curved arc. So, light coming out of that surface is short wave. It's going to be a straight line from a different surface. This is going to be some surface at temperature one.

A different lower temperature surface is potentially a very good long wave emitter also having a curved arc for the emitting surface and a wiggly line, in this case, that signifies that long wave band. That's that band greater than 3,000, 3,000 to 50,000 or 3,000 to 30,000 nanometers, whereas the short wave is a 250 to 2,500 nanometer range.

Any other notations we're going to come across here in just a second, but you can see here I've got a diagram of the sky dome. This is pretty common arc that we're going to have in the class. Just saying, look, there's this entire sky here, and it in and of itself is going to be a source of light. How do we diagram that?

Well, first, let's put a receiving surface on the ground. We'll say that we have a solar panel on the ground here, and it's going to be a receiver of light. And so, I'm going to now start diagramming.

I know that the sun is a source of emission of light. That's going to be short wave light. Short wave light, as we will see in just a second, is effectively transparent to the atmosphere. So, it's passing straight through the atmosphere without being absorbed.

And, ultimately, it's going to come to the surface. A portion of it might reflect off. The rest of that light is going to be absorbed by our solar reflector and thus generating the excited states for electrons if it's a photovoltaic panel, hot water if it's a solar hot water system. But that's our main source of energy that we think of, and that's that beam component of light that we'll talk about eventually.

There are other sources of light in this system, and we want to diagram them. So, for example, we know that the sun will hit the ground and it will reflect off the ground. We're going to have a lot of light that's coming and hitting the ground and reflecting off of it. And that reflected light off of the ground is called the albedo. But, in our case, we're just diagramming it as a check mark on here, and it will ultimately also be a secondary, but a source of light for this tilted panel. That's the participation of the ground in the short wave energy.

The sky itself is full of back scattering. We had this diagram of forward scattering and back scattering across the atmosphere. I'm going to diagram all of that as straight lines coming off of the surface of the sky dome with the idea that all of this light is still reflected light. It's still scattered light. It's not emitted light, otherwise, I would have a curved surface here, but I don't. I've got just a straight line showing that, basically, this is all reflected light.

And we know the sun is approximated by a black body at about 5,777 Kelvin, whereas all of our terrestrial surfaces are going to be somewhere in the order of 300 Kelvin. Much, much lower than the temperature of the sun. And yet, you can see that we have a great way to do some quick diagramming to hopefully understand--

Recapping: Electromagnetic radiation (as light) is first emitted, and the emitted photons have an opportunity to be transmitted, absorbed, or reflected by an intervening surface. If that surface is a particle or an assemblage of particles, there will be a tendency for the reflection to be more accurately described as "back-scattering."

‹ 3.4. Learning Activity: Laws of Light up 3.6. Case Study: The Atmosphere as a Selective Cover ›
EME 810: Solar Resource Assessment and Economics