Once we have identified our specific location on the surface of Earth, we use the spherical relations between the Sun and the fixed observer at the locale to describe the relative motion of the Sun during the day and over the year. Once again, this text is closely complementing the text in the book.

Pay attention to the fact that this particular set of relations is only for the special case of a horizontal surface. We are only describing angles for an imaginary flat surface on Earth, like a table top. In real SECSs, we will often tilt the receiving surface up (tilt has a symbol of ), specifically to minimize the cosine projection effect that occurs at a given latitude. Bear in mind that the angles for a non-horizontal surface (tilted, with some accompanying azimuth orientation ), or for a tracking system, are an entirely different set of general equations. 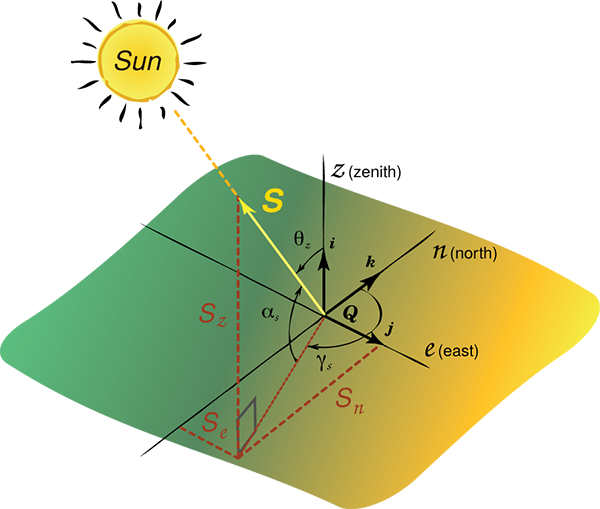 Figure 2.13: We are showing azimuth orientation Convention I, where the vector S is pointing from the surface of Earth toward the Sun, given the zero basis for the azimuth is directed toward the Equator (±180°). Convention I follows the vectorial form of S = Sz i + Se j + Ssk. Convention II (the meteorological standard) is where is where the zero basis is directed to the North (0-360° clockwise).
Credit: J. Brownson © Penn State University is licensed under CC BY-NC-SA 4.0

The Solar Altitude () measures the angle between the central ray from the Sun (beam radiation), and a horizontal plane containing the observer. Note that the subscript "$_s$'' is there to indicate that the altitude relative to the observer of the Sun. This will become important in evaluating the altitude angles of other objects projected onto the sky dome, like buildings, overhangs, wing walls, and arrays of solar receivers.

The Zenith Angle () is the geometric complement of the solar altitude angle. We direct your attention to the use of here, as the general concept of the angular deviation of the Sun's ray from the normal projection of a surface is called the angle of incidence, . In effect, the zenith angle represents the angle of incidence for a horizontal surface.

The Solar Azimuth () measures the angle on the horizontal plane between the meridian of the 0 degrees axis (South, for the Northern hemisphere, opposite Down Under) and the meridional projection of the Sun's central beam (the Sun's meridian). The convention we will use is also used in the advanced design tools for solar energy, TRNSYS (UW-Madison: Transient eNergy Simulation Software), PVSyst, and SAM (NREL: System Advisor Model). The angle varies from 0 degrees at the South-pointing coordinate axis to degrees. East (earlier than noon) is negative and west (later than noon) is positive in this basis. This is a well-used standard taken from the original text of M. Iqbal.\cite{iqbal83}

Note: the function "sign()" is specifically defined as a cases form of positive and negative notation (meaning there are two alternate cases to choose from).

There are several texts and software available that use a solar azimuth, measuring clockwise on the horizontal plane from a North-pointing (0 degrees) coordinate axis. This is also the convention for the field of meteorology and for the wind industry. This azimuth convention uses 360 degrees for the meridional projection of the Sun's central beam.

However, the majority of professional software does not use this convention yet, so you must be aware of the difference, as the math changes with the two methods. It is relevant to be aware of the difference, in that the North basis is used in the basic educations tools for simulation called PVWATTs, for the sun path tool at the University of Oregon, and in the interactive software PVEducation.org.